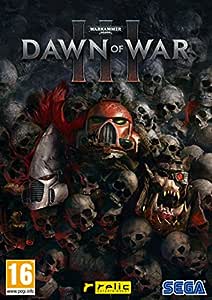 by SEGA
Platform : Windows 7 |
Rated: Mature
4.7 out of 5 stars 3 ratings
Available from these sellers.

Dawn of War III heralds a new era in the franchise bringing the 'best of ' features from its predecessors - base building, large-scale battles, hero units and customizable armies - with a rich story that immerses players in the 40K universe and gives you a strategy game for the modern era. These are the biggest units, abilities and battles to date!

Step into a brutal battle between three warring factions.

In Dawn of War III, you will have no choice but to face your foes when a catastrophic weapon is found on the mysterious world of Acheron.

With war raging and the planet under siege by the armies of greedy Ork warlord Gorgutz, ambitious Eldar farseer Macha, and mighty Space Marine commander Gabriel Angelos, supremacy must ultimately be suspended for survival.

4.7 out of 5 stars
4.7 out of 5
3 customer ratings
How does Amazon calculate star ratings?
Amazon calculates a product’s star ratings based on a machine learned model instead of a raw data average. The model takes into account factors including the age of a rating, whether the ratings are from verified purchasers, and factors that establish reviewer trustworthiness.