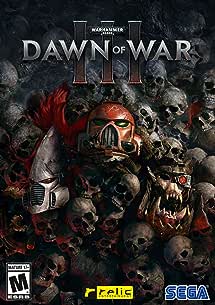 Brand: SEGA
Platform : Windows, Windows 7 |
Rated: Mature
| DRM: Steam
3.6 out of 5 stars 22 ratings
Currently unavailable.
We don't know when or if this item will be back in stock.
Note: After purchase, you can access the item in Your Games Library.
By placing your order, you agree to our Terms of Use.
This product is non-returnable and non-refundable.
Note: Currently, this item is available only to customers located in the United States.

Step into a brutal battle between three warring factions

In Dawn of War III you will have no choice but to face your foes when a catastrophic weapon is found on the mysterious world of Acheron.

With war raging and the planet under siege by the armies of greedy Ork warlord Gorgutz, ambitious Eldar seer Macha, and mighty Space Marine commander Gabriel Angelos, supremacy must ultimately be suspended for survival.

Take control of towering war machines and tip the balance of battle in your favor with the biggest characters in Dawn of War history. Turn the tide with the mighty Imperial Knight (Space Marine), the clattering Gorkanaut (Ork), or the haunting Wraithknight (Eldar).

Dawn of War is famous for its epic action and those immense clashes are back - but now they're off-the-scale. Wage war with massive armies across violent volcanic terrain or mighty orbital Star Forts.

CALL UP YOUR ELITES

Take your battle plans to another level by deploying powerful collectible elite squads, each boasting their own special abilities and bonuses that will help you unlock and develop new attacking strategies to conquer your foes.

Cause devastation on the battlefield with powerful super-abilities. Rain down total destruction on your enemies with the Space Marine's Orbital Bombardment, the Eldar's blistering Eldritch Storm or the Ork’s Rokks to counter your unsuspecting rivals.

Learn what makes each force formidable through alternating missions. You'll soon come to understand the combat advantages of Space Marines, Orks, and Eldar and the rules of a universe with no heroes or villains… only war.

ONE ARMY TO RULE

Build your own universal army from the very first moment you are matched in a melee. Progress through battle after battle with loyal troops by your side across both challenging campaign missions and dominating multiplayer maps.

Your army will wreak havoc in online skirmish mode. Join the multiplayer community and forge new alliances - then turn the tables on your new 'friends' as they become foes in explosive, chaotic and competitive maps.

Warhammer 40,000: Dawn of War III Copyright Games Workshop Limited 2017. Dawn of War III, the Dawn of War logo, GW, Games Workshop, Space Marine, 40K, Warhammer, Warhammer 40,000, 40,000, the ‘Aquila’ Double-headed Eagle logo, and all associated logos, illustrations, images, names, creatures, races, vehicles, locations, weapons, characters, and the distinctive likeness thereof, are either or TM, and/or Games Workshop Limited, variably registered around the world, and used under license. This release is developed by Relic Entertainment and published by SEGA. SEGA, the SEGA logo, Relic Entertainment and the Relic Entertainment logo are either registered trademarks or trademarks of SEGA Holdings Co., Ltd or its affiliates. All rights reserved. SEGA is registered in the U.S. Patent and Trademark Office. All other trademarks, logos and copyrights are the property of their respective owners.

3.6 out of 5 stars
3.6 out of 5
22 global ratings
How are ratings calculated?
To calculate the overall star rating and percentage breakdown by star, we don’t use a simple average. Instead, our system considers things like how recent a review is and if the reviewer bought the item on Amazon. It also analyzes reviews to verify trustworthiness.
Top reviews

Ian
2.0 out of 5 stars Tries to be too many things in a b rate and poorly executed narrative.
Reviewed in the United States on June 14, 2017
Verified Purchase
Tried to be a hyrbid of Dow 1 and 2. Why it went from a serious design and story to a comic bit of trite is beyond me but it fails on every level. Total waste of money.
Read more
One person found this helpful
Helpful
Comment Report abuse

CM S.
4.0 out of 5 stars Pretty good, could have been better with more content and polish.
Reviewed in the United States on May 10, 2017
Verified Purchase
Amazon sent the code quickly. Just put the key directly into Steam to download and play.

The game itself isn't as bad as everyone makes it out to be and is rather fun with the limited content they have.
The optimization is good. The graphics are decent. The single player campaign is fairly weak compared to DOW1 and DOW2, and Multiplayer lacks a lot of content at the moment. Hopefully with patches and updates they will add more content for free preferably considering the small amount of content at launch.

If you're a fan of 40k and RTS games, this would be a good pickup on sale or after updates/DLC.

Amazon Customer
4.0 out of 5 stars 4 out of 5
Reviewed in the United States on May 31, 2017
Verified Purchase
Game was layed out great for the single player campaign i just didnt care for the multiplayer experience
Read more
Helpful
Comment Report abuse
See all reviews

Amazon Customer
5.0 out of 5 stars Take a wild, baroque holiday of destruction in the 40K Universe!
Reviewed in the United Kingdom on May 13, 2017
Verified Purchase
A highly controversial game that has completely surprised me. I'm a hard-core Dawn of War 1 and 2 fan, as well as a veteran of the miniatures, so I approached this game with caution. Initial impressions from early screenshots and video teasers weren't good, and I expected the worst. On release however, I was stunned to find an expertly crafted classic RTS with some highly innovative influences from other strategy formats. I'm not a campaign players, so my impressions are entirely from the multiplayer experience, and it's an experience drenched in firey, colour-drenched tactical chaos! Army caps are very large, and with a full player count of Ai or human opponents, the screen is quickly crammed with explosions, special weapon effects, tanks, Space Marines and more Xenos than you can shake a tactical nuke at. Any 40k game that can consistently replicate the cover of the first edition 40k rules has got to be doing something right. The game is very deep with huge tactical breadth. The controversial changes to the cover system sound terrible on paper but is incredibly well implemented in practice. The cover shield domes can contain large numbers of troops, and these hard points can quickly become the focus of some of the most ferocious and protracted RTS battles I've experienced, with players throwing everything into attack and defence. The game also runs fantastically well, handling hundreds of units, effects and highly detailed environments with ease. Dawn of War 3 is a veritable rock-concert of ballistic destruction. Highly recommended!
Read more
2 people found this helpful
Report abuse

Sushi
2.0 out of 5 stars Dissapointing
Reviewed in the United Kingdom on January 6, 2018
Verified Purchase
Received the product fine, as for the product itself, between the lack of content, the insane input delay (1.5 secs between orders) and just how generally bland the gameplay is, it was a huge dissapointement.

Only bright side is visually speaking it has some redeeming factors, but looks aren't enough to carry this product.
Read more
Report abuse