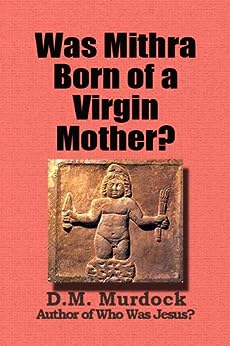 Was Mithra Born of a Virgin Mother? Kindle Edition

by Acharya S (Author), D.M. Murdock (Author) Format: Kindle Edition
See all formats and editions
Sorry, there was a problem loading this page. Try again.
This paper provides evidence that the pre-Christian Persian, Armenian and Asian Minor goddess Anahita was considered both a virgin and a mother, at some point viewed as having given birth parthenogenetically to the Perso-Armenian god Mithra.

For evidence the author draws upon ancient texts and traditions, often preceding the common era by centuries to millennia, as well as the opinions of credentialed modern authorities. The thesis presented here also demonstrates that certain motifs and traditions found within Christianity in reality predate that faith and possibly served as a source thereof.

This ebook is part of a larger work called Mithra: The Pagan Christ. It was created as an article for a journal and as a chapter in the aforementioned book, which has not been published yet.

D.M. Murdock, also known as "Acharya S," is an independent scholar ofcomparative religion and mythology, specializing in the ancientastrotheological origins of popular religious systems and beliefs. Herwork can be found on her websites TruthBeKnown.com,StellarHousePublishing.com and FreethoughtNation.com. Acharya's booksinclude The Christ Conspiracy: The Greatest Story Ever Sold; Suns of God: Krishna, Buddha and Christ Unveiled; Who Was Jesus? Fingerprints of The Christ; Christ in Egypt: The Horus-Jesus Connection and The Gospel According to Acharya S. Murdock is also the CEO and president of Stellar House Publishing, which also publishes extraordinary works such as Man Made God by mythology scholar and secular writer Barbara G. Walker. Murdockreceived her education in Classics, Greek Civilization, at Franklin& Marshall College, and is an alumna of the American School ofClassical Studies, Athens.

D.M. Murdock, also known by her pen name, "Acharya S," is the author of several books on comparative religion and mythology, including "The Christ Conspiracy," "Suns of God," "Who Was Jesus?" and "Christ in Egypt." She is also the author of "The Gospel According to Acharya S," which seeks to answer some long-held questions concerning the nature of God, religion and humankind's place in the world.

Murdock is an alumna of Franklin & Marshall College in Lancaster, PA, where she studied Classics, Greek Civilization. She has lived in Greece and is also an alumna of the American School of Classical Studies at Athens, Greece. Acharya has excavated at Corinth, Greece, where tradition has St. Paul addressing the Corinthians, as well as at a Paleo-Indian site in the U.S. She speaks, reads and/or writes to varying degrees English, French, Spanish, ancient and modern Greek, Latin, German and other languages.

Amazon Customer
5.0 out of 5 stars Virgin Birth
Reviewed in the United States 🇺🇸 on June 12, 2014
Verified Purchase
This is an important contribution to the story of Mithra. I found it enlightening and informative and also interesting. I read it through in one sitting. I recommend it to anyone interested in studying ancient beliefs.
Read more
One person found this helpful
Helpful
Report abuse

Lindy
4.0 out of 5 stars Interesting Thesis
Reviewed in the United States 🇺🇸 on April 19, 2013
Verified Purchase
Although not necessarily original (but what is), this book provides an excellent introduction into the history of Near Eastern religious thought as expressed through the mystery cults. The author provides a scholarly and factual basis for the cultural institutions that influenced later Judeo-Christian thought.
Read more
Helpful
Report abuse

Mountain West Bob
4.0 out of 5 stars Virgin Birth A Very Common Religious Theme
Reviewed in the United States 🇺🇸 on December 5, 2013
Virgin Birth! What a concept. It was a very popular theme in many, if not most, of the early religious traditions, and Christians picked up on it.
Read more
2 people found this helpful
Helpful
Report abuse
See all reviews

Ricardo Rocha
5.0 out of 5 stars ENLIGHTENING
Reviewed in Brazil 🇧🇷 on May 20, 2014
Verified Purchase
As it happens with all the works by D.M. Murdock, this one also throws light on a subject fundamental for the deep understanding of the religious quest and for the faith of true believers, on a solid basis.
Read more
Report abuse
See all reviews