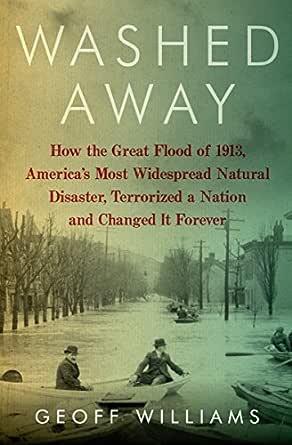 Washed Away: How the Great Flood of 1913, America's Most Widespread Natural Disaster, Terrorized a Nation and Changed It Forever 1st Edition, Kindle Edition

Past Praise for Geoff Williams:
“Williams meticulously and brilliantly captures the roughly 2,000-mile journey and the larger-than-life characters. The result is a fine, unlikely, and intimate journey into the American past, across the deserts, mountains and plains with heroes bearing wild aspirations long since gone.” —The Washington Post
“Williams has evocatively recreated a long-forgotten event, mixing colorful anecdotes from the race with vivid portraits of the runners.” —Publishers Weekly
“Williams recounts the story with gusto, giving us a real sense of the physical and mental toll. The book is like a time capsule—and an extremely entertaining one at that.” —Booklist

Geoff Williams is a longtime newspaper and magazine journalist, and the author of C. C. Pyle’s Amazing Foot Race: The True Story of the 1928 Coast-to-Coast Run Across America (Rodale, 2007). His writing has appeared in National Geographic World, Life, the Cincinnati Post, and much more. He has appeared on CNN and NPR’s Talk of the Nation. For most of his life, Williams has lived less than an hour away from the Great Flood’s epicenter in Dayton, Ohio.

Of the major natural catastrophes of the early twentieth century, the Great Flood of 1913 is one of the least remembered. Over several days in March of that year, heavy rains with fierce winds and tornadoes caused severe flooding in 14 states. Before the storm abated, rain turned to snow. Every major river east of the Mississippi rose, many bridges washed away, and fallen telegraph and telephone lines isolated towns and cities in need of outside help. Hundreds of people died between Nebraska and Vermont from drowning, fires, freezing temperatures, accidents, and suicide. Indiana, Ohio, and Pennsylvania were the hardest-hit states. Williams weaves tragic and heroic stories of people in the various affected states into an almost hour-by-hour account of the deadly storm. This quick-reading history published for the storm’s centennial should interest readers who enjoyed Erik Larson’s Isaac’s Storm (1999), about the Galveston hurricane of 1900, or Simon Winchester’s A Crack in the Edge of the World (2005), about the San Francisco earthquake of 1906. --Rick Roche --This text refers to an alternate kindle_edition edition.
Read more

4.1 out of 5 stars
4.1 out of 5
140 global ratings
How are ratings calculated?
To calculate the overall star rating and percentage breakdown by star, we don’t use a simple average. Instead, our system considers things like how recent a review is and if the reviewer bought the item on Amazon. It also analyzes reviews to verify trustworthiness.
Top reviews

Cheryl J. Leslie
4.0 out of 5 stars Historical Timeline
Reviewed in the United States on December 26, 2016
Verified Purchase
Why did I not know about this flood? Geoff Williams writes about the Great Flood of 1913, a disaster that begins with tornadoes in Nebraska and ends with flooding and severe storms in many other states, most notably Indiana and Ohio. The flood was particularly hard on the city of Dayton, Ohio, but so many other towns and cities were swept away in the waters.
Written in a timeline type narrative, the story of the flood moves at a fairly quick pace, going back and forth from Dayton to other parts of the Midwest documenting not only nature's fury, but people's reactions and actions which either saved them from certain death by drowning or swept them into the current, some never to be seen again.
The book has photos at the end of it, but I found many other online that gave me a better idea of the damage the weather and the flood caused. I had never heard of weather like this before. People on their rooftops in the rain and then the snow and freezing temperatures, while in other parts of the country severe springtime storms wreaked havoc, producing tornadoes and other severe weather.
This book is quite insightful when it comes to the humanity of such a horrible disaster. It gives the reader a glimpse of the past and what has changed (and what hasn't) over the last 100 or so years when it comes to how man handles natural disasters.
I recommend this book to anyone interested in American history and/or is a weather geek like me.

Stephen C. Carpenter
4.0 out of 5 stars Washed Away: How the Great Flood of 1913, America's Most Widespread Natural...
Reviewed in the United States on January 6, 2014
Verified Purchase
I grew up as the grandchild, and cousin of many relatives who survived the Dayton flood of 1913. Even in the 1950's and 60's my elder relatives would talk about it. It was clearly a life changing experience. They talked about it more than they did the Wright brothers who they knew. Flight was nothing compared to flood. Flight was dubious, flood was not.

Previous reviewers are troubled by the author's style of presentation. In that he presents many locales and goes from one to the other. However, he correctly tells us early in the narrative, that although all floods are seen and remembered as local. Particularly when there was no real national media; that this disaster was indeed national in nature. The presentation is such that it is as if you were sitting in FEMA center with reports coming in from areas able to report and silence from most others. The silence of course represents what became and always becomes the reconstructed tragedy.

Kathryn M. Young
5.0 out of 5 stars Horrible Flood: Great Stories
Reviewed in the United States on December 16, 2016
Verified Purchase
Geoff Williams did an amazing job of researching a 100 year old event, finding Real family tales of this horrific disaster.
Trying to imagine an entire week of surging waters, never-ending rain, pitiless cold, and lives without communication or
refrigeration would have been beyond me. But thanks to Mr. Williams, it all became Reality. This is a genuine page-turning
history, which gets tied into today in many facets. Highly recommended.
Read more
6 people found this helpful
Helpful
Report abuse

Stone Dog
VINE VOICE
4.0 out of 5 stars A deluge in the Midwest!
Reviewed in the United States on March 16, 2014
Verified Purchase
"Washed Away" by Geoff Williams gives the reader a ground-level, up-close and personal view of one of the most wide-spread natural disasters to strike America. The states of Ohio and Indiana were the hardest hit, but many of the surrounding states were hit almost as hard.

The author gives the reader hundreds of vignettes of the flood from a close-up perspective people in 1913 faced. Though he focuses on Dayton, Ohio, he includes many episodes from other Ohio towns such as Zenia and Columbus as well as towns in Indiana such as Indianapolis, Fort Wayne, and Peru.

The author gives the reader the intimate portraits of the victims, the rescuers, the press and the bystanders. One important person in Dayton was James Patterson, founder of NCR (and, recently convicted of anti-trust laws) who saw what was happening and, immediately, set his factory up as a refugee center as well as setting his factory to the task of building boats. Patterson showed himself a community benefactor in Dayton.

There are so many tales of miraculous rescues and, on the other side, heart-breaking deaths that the reader will get an real feel for what it was like in areas that were in the path of the flood. Men worked tirelessly to save their neighbors and fellow residents. I was shocked by the number of people who died bravely trying to save others though their chances were obviously slim.

It's a good read, but my criticism would be that there's no higher-level description of the event that was much larger than the vignettes show. There are no maps showing the extent of the floods and the view is very narrow and small. I would have liked to have seen the big picture laid out for the reader.

On the whole, though, this is a very good book on one of those iconic disasters that has, unfortunately, been forgotten. I enjoyed the read and I recommend it with four stars.
Read more
5 people found this helpful
Helpful
Report abuse

MsHobbs
5.0 out of 5 stars Really great research
Reviewed in the United States on June 6, 2018
Verified Purchase
I found this book very in depth. I felt myself feeling the anguish and fear these people faced. Those who live in towns in Ohio, Indiana, Pennsylvania, Nebraska, and the Mississippi river basin, should read this book. The history of this tragedy is a great eye opener for women, African-Americans, children, and would be heroes. I can't think of anyone who would not benefit this history. A really great read.
The entire country was affected by this catastrophic weather event.
Read more
One person found this helpful
Helpful
Report abuse

Kevin A. Turner
5.0 out of 5 stars Great story
Reviewed in the United States on May 15, 2016
Verified Purchase
I read some other reviews of this book that were not very kind. I disagree with their assessment. This story of the 1913 flood captures the fear, tragedy, danger, and despair that comes with a flood. If you have never seen a major river in a major flood, then this book comes as close as any when describing the emotions and environment connected to a flood. This book gave me flashbacks to the 1997 ohio river flood. I had to put it down once because I didn't want to read the chapter about children (children drowning is terrible). Good.job Geoff Williams for a wonderful read..
Read more
21 people found this helpful
Helpful
Report abuse
See all reviews