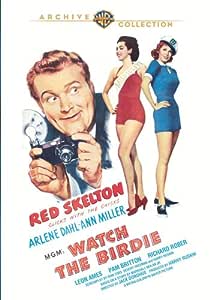 Not one, not two, but three Red Skeltons zig-zag through this madcap adventure and turn Watch the Birdie into a real treat! The crown prince of clownery flusters his way through high jinks involving three beautiful women and two suave crooks, making this story of a bumbling photographer one picture-perfect film. Trying to raise enough money to save his camera store from foreclosure, Rusty Cameron (Skelton) rents a newsreel camera and goes hunting for a story. Encouraged by his father (also played by Skelton) and teased by his grandfather (Skelton again!), Rusty plunges forward and nearly drowns in the harbor. Rescued by a beautiful and lonely heiress (Arlene Dahl) and tempted by the gorgeous Ann Miller, Rusty lands in the middle of a villainous plot that has just the right touches of romance and pratfalls – with Rusty, of course, saving the girl and the day!

Randy E. Halford
5.0 out of 5 stars An almost picture perfect Skelton comedy
Reviewed in the United States on August 10, 2012
Verified Purchase
As far as story & execution go, "Watch the Birdie" (1950) is probably a notch below such Skelton classics as "The Fuller Brush Man", "A Southern Yankee", and "The Yellow Cab Man". What do they have in common? Why Red, of course, giving his all to make us laugh. This was Red's final brush with comedy legend Buster Keaton (as this was a remake of Keaton's silent "The Cameraman"). Told in a compact 71 minutes, WTB is a genial comedy about Rusty Cammeron who does what he can to save his camera store from foreclosure. Again, Red's talents are used to great effect as he portrays Rusty, his father, and grandfather. There are some terrific moments to savor: The changing room bit; Rusty's news story coverage (with each segment backfiring hilariously); the outboard motor bit; and an offbeat but funny climax aboard an elevated loading vehicle.
Cheesecake is sliced up in the form of Arlene Dahl & Ann Miller. However, the climax feels abrupt as the movie ends right when Red & Dahl deliver the crooks to police. End scene. There should've been a nice closing scene or follow-up gag.
No matter. This is still an enjoyable Skelton film, simply because Red is there. Kudos to one of the great movie clowns!

Alexander Carrillo
5.0 out of 5 stars Thanks Red
Reviewed in the United States on June 6, 2018
Verified Purchase
Very funny film, as Red does his best in this film as running a camera store that is own by his father, and as Red play 3 roles as himself he play his grandfather, his father, and his son, and I love it, thank you Red. I remember you when you had a series on CBS every Tuesday night....
Read more
Helpful
Comment Report abuse

Lee E. Blasingame
5.0 out of 5 stars Red Skelton is still a funny funny man
Reviewed in the United States on November 24, 2010
Verified Purchase
what is wrong with this picture, Red Skelton Arlene Dahl Ann Miller in a remake of a Buster Keaton film "the Camera Man". the answer is...Nothing at All. it is a great and funny movie, on tape as it is here, or in a dvd format, it was make by MGM and Red plays three people in it. i watched it right away when it came in, i only wish i had an audience here in my house to see it with. it must have been wonderful years ago to see real comedies at the movie theaters in stead of the junk they make now a days.
Read more
5 people found this helpful
Helpful
Comment Report abuse

JJ
5.0 out of 5 stars Glad I Watched the Birdie
Reviewed in the United States on June 25, 2016
Verified Purchase
Viewing a portion of this movie on TV, prompted me to order the DVD of Watch the Birdie, with Red Skelton.
As with other movies by Red Skelton in my collection, Watch the Birdie was enjoyable, offering quite a few laughs
for me. The classic movies, when actors had to truly act, are far preferable to the CGI heavy movies of today,
at least to me.

Gary Alan Henson
5.0 out of 5 stars Fun and Funny
Reviewed in the United States on February 20, 2016
Verified Purchase
Red is my all time favorite TV, Movie and all around comedian, nice guy.

I miss him a lot, compared to today's rude, crude and stupid comedians.

Daniel Patterson
3.0 out of 5 stars Skelton fans will enjoy.
Reviewed in the United States on March 1, 2017
Verified Purchase
Gotta love Red Skelton, though this is a run-of-the-mill effort. Interesting to see what was considered funny at the time.
Read more
Helpful
Comment Report abuse

Page 1 of 1 Start overPage 1 of 1
This shopping feature will continue to load items when the Enter key is pressed. In order to navigate out of this carousel please use your heading shortcut key to navigate to the next or previous heading.
Back
Next
Pages with related products. See and discover other items: watch camera