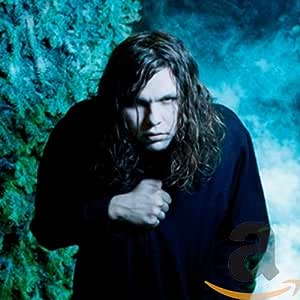 Look for the upcoming documentary about Jay's eventful career to date coming in August.

"Snarky, snarling, and soaring, this kind of derangement rarely sounds so sweet" --Dusted

Sid
5.0 out of 5 stars 2009 180 gram vinyl is a lie. Possibly.
Reviewed in the United States on February 13, 2014
Verified Purchase
The 2009 version has a sticker that says "audiophile 180 gram vinyl" roughly. So if you dont have that, it's the 2013 120 gram version, which isnt even an option when ordering. They said try again. It has to happen twice for them to make changes to the page. So I will update on Monday. If anyone is trying to order that version, you might wanna wait. But Amazon has been amazing through this whole process, so even if you do get the wrong one, it's easily fixed.
"Amazon:You are more important to us than a single product." Isn't that sweet?

As for the music, I love it. I've mainly only been listening to Jay since I first heard Blood Visions a couple years ago. This album still gives me goosebumps after... jesus, I wish my mp3 player kept track. Gotta at least be a couple hundred times by now. I could probably listen to the last track on repeat for a week straight.

John L. Roberts
5.0 out of 5 stars The formula perfected.
Reviewed in the United States on January 27, 2010
Verified Purchase
Blood Visions, while not being my normal taste in music, showed me there was hope for pop music. Someone had finally "hit the nail on the head" as I put it in its review a few years back. Blood Visions,being such a perfect piece of music, made me nervous about picking up anything of Jay's after. There was no way to top BV in my mind.....I was wrong.

Watch me fall, along with the Matador collection '08, show Jay moving to even a more focused vision of his version garage punk. Talk about being a catchy! There isn't a single dud on this album. Comparable to Nevermind! The songs are very personal, sometimes soft and slow, but again as with BV still able to be undeniably edgy and punk. Focused and polished (in technique), not overproduced this album is a new classic.

Wish I would have followed Jay more closely. I am truly regretful that it took his death for me to start paying attention again and pick up this MONUMENTAL album. Even more so regretful that I missed that show because it was on a week night.
Read more
10 people found this helpful
Helpful
Comment Report abuse

Corey Pass
5.0 out of 5 stars Why do I need a headline?
Reviewed in the United States on January 23, 2019
Verified Purchase
Jay doesn’t need a headline. He’s was a great player and songwriter. Great album
Read more
Helpful
Comment Report abuse

Kris Fisher
4.0 out of 5 stars For My Son
Reviewed in the United States on April 10, 2014
Verified Purchase
He loves it although I find this poor souls lyrics depressing and questionable. Would NEVER buy it for myself but then again my parents probably wouldn't have bought be a Butthole Surfer's album back in the day either.
Read more
2 people found this helpful
Helpful
Comment Report abuse

Amazon Customer
5.0 out of 5 stars Five Stars
Reviewed in the United States on October 9, 2017
Verified Purchase
All Reatard all the time.
Read more
One person found this helpful
Helpful
Comment Report abuse

buttonmasher79
4.0 out of 5 stars Jay's not as dreary as he appears.
Reviewed in the United States on December 24, 2009
Verified Purchase
There's a playfulness about this album that will have you humming these little "punk" ditties all day long.

Slick, concise and never too serious, "Watch Me Fall" is on my Best of 2009 list and for good reason.

There's nothing here that hasn't been done before, but it's refreshing all the same.

Especially after being tormented by Miley Cyrus and the Black Eyed Peas all year long.
Read more
One person found this helpful
Helpful
Comment Report abuse

Etienne Desormeaux
5.0 out of 5 stars Jay Reatard disappeared way too soon !
Reviewed in the United States on December 13, 2013
Verified Purchase
This is a hard one to find and I've been looking for it for a long time , sealed like this: treasure !!!
Read more
Helpful
Comment Report abuse

David Long
3.0 out of 5 stars Reatard Review
Reviewed in the United States on February 17, 2010
Verified Purchase
Not a bad effort from a talented musician with only the bare production basics. Tinge of grunge mixed with punk spice create a concoction worth tasting. While you may not stay for the entire meal you'll certainly enjoy the appetizers and leave with a curiosity for what the entree has to offer.
Read more
Helpful
Comment Report abuse
See all reviews