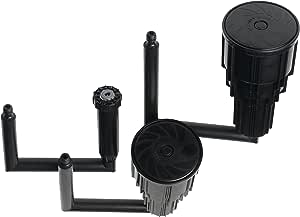 Brand: Watering Made Easy
3.8 out of 5 stars 14 ratings
Currently unavailable.
We don't know when or if this item will be back in stock.

3.8 out of 5 stars
3.8 out of 5
14 global ratings
How are ratings calculated?
To calculate the overall star rating and percentage breakdown by star, we don’t use a simple average. Instead, our system considers things like how recent a review is and if the reviewer bought the item on Amazon. It also analyzes reviews to verify trustworthiness.
Top reviews

packeroni
1.0 out of 5 stars Very frustrating sprinkler for variety of reasons.
Reviewed in the United States on August 13, 2014
Verified Purchase
I purchased three sets of these combo sprinkler packs, a total of 9 sprinklers. Overall I am very disappointed for a variety of reasons. So, this combo set comes with 2 of the original large rotating sprinklers and one of the smaller pop up square sprinklers. Let me start with the larger rotating ones....none of these leaked when tested upon arriving, "normal" per say. Good start. The issue I have with these units is that you cannot really just hook the hose up and walk away doing other things. These things stick. They will work, sprinkle, sprinkle, sprinkle, then get stuck in a position and stop rotating, staying spraying in one location until you go to the sprinkler and mess with it. I went to their website for troubleshooting and it lists things to try such as adjusting the angle clips, flipping the metal tab up then back down, being sure to not use a timer at the spout, using regular sized no coiling hose, etc. Often times they say, once you adjust it, it will be good for years to come. This has not been my experience. This happens to me for EVERY sprinkler, EVERY time I use them, multiple times. If I want for example to have one sprinkler on for 30 minutes, it is pretty common for that sprinkler to get stuck 3 times during that 30 minute period. Very frustrating. I was expecting a plug the hose in and walk away experience, this is not the case. Plug the hose in, but be keeping your ear out to hear the rotating stop or watching it often that way you can go out, tap on it, adjust this or that to get it going, then continue to keep an eye on it. The final troubleshooting instruction is to contact not them but the maker of the sprinkler and they will likely mail you a new one. Problem there is, you have to dig up every single one you installed in the ground. No thank you.

The pop up sprinklers are a different story. All three packages had defective pop up sprinklers. Where all three of them were defective was at the 90 degree turns in the system, and one of them the top of the sprinkler where a screw is popped off and cannot be replaced. The tubing/piping is in the shape of a U which you can see from the pics of the product. To do this they cut the pipe and it appears melt/glue them together. All three had leaks in these "welds". Thank goodness I tested them before putting in the ground. So, I contacted Watering Made Easy, you can only leave a voice-mail when you call. You can fill out a form online as well with questions or issues, but it says on there that it can take up to 3 weeks for their response. Being that this was the middle of summer and I needed sprinklers now I called hoping I'd hear back soon. So, I left a voice-mail and did hear back relatively quickly, within 48 hours. They said they were sorry this happened, and they did mail out to me replacement ones. I was encouraged even though I was frustrated with the larger rotating ones. That encouragement lasted only minutes after getting the replacement ones as ALL of those had leaks as well. So on the pop ups 6 out of 6 were defective. Ultimately I gave up on these pop up ones and will let it go. Disappointed in the lack of quality control and quality of the pop ups, and overall frustrated with the issue of the larger ones sticking in place. I have not decided if I will take all the ones I did put in the ground, the larger rotating ones, and return back to Amazon. When they are rotating they are great, but their lack of staying rotating is extremely frustrating.

tjb
5.0 out of 5 stars A good start to a sprinkler system
Reviewed in the United States on July 27, 2014
Verified Purchase
I was impressed by how well they worked. I constructed a box that would hold the sprinkler and packed it with a sand and rocks mix. I moved the box around to test where it was best to locate them. I tested the smaller size heads by dumping out the rocks and sand and repacked the smaller sprinkler head with same rocks and sand. I ultimately installed what I bought but finished the layout using ganged sprinklers heads with a quick connect hose connection.
Read more
Helpful
Comment Report abuse

aGuyMi
4.0 out of 5 stars Good but a lot cheaper making it yourself with same parts
Reviewed in the United States on July 2, 2012
Verified Purchase
You can also make this product yourself a LOT cheaper.

They use the Orbit Super Jet Impact Sprinkler found here and it is widely available: [...]

Make the connection yourself with 1/2 inch pipe and a connector and you're good to go. You can get the parts at every store.

Watch the amazon review (see above link): i had the same problem. One sprinkler was stuck at 1 position. No matter what you do. Customer support sent a replacement head. Thanks.

ME
5.0 out of 5 stars Supper Easay to install and use
Reviewed in the United States on December 12, 2013
Verified Purchase
Super easy to install. I installed 6 of these in my newly sodded front yard. They worked just as advertised. I have not used them in 2 years though, so I dont know for sure how they held up over the winter, because I did not drain them as the instruction recommended to.
Read more
Helpful
Comment Report abuse

Canadian Gadget Guy
3.0 out of 5 stars Great idea - but test them before you bury them
Reviewed in the United States on December 14, 2012
Verified Purchase
Great concept: permanently aimed/configured pop-up inground sprinlers at a reasonable cost.
The elbow joints looked suspicious so I connected the hose to test them. Good thing I did because they leaked considerably. Imagine going through the hassle of burying them to discover your pressure was "robbed" . . .
I applied thick beads of a glue designed for fish tanks, let it cure and re-tested. Success.
The insatallation was straight forward and they work well - surprisingly quiet compared to the metal sprinklers I'm used to.
I'm keen to see if they survive their first Ontario winter.
(I blew them out with my leave blower and put a little windshield washer fluid in them for paranoia's sake)
If they perform as well this spring as they did last summer, I will buy more for the back yard.
Read more
Helpful
Comment Report abuse

S. Rhame
4.0 out of 5 stars Watering Made Easy
Reviewed in the United States on March 8, 2009
Verified Purchase
I'm very pleased with these items. A plug was missing from one of the Original sprinklers but an email to the manufacturer quickly solved the problem as they mailed me one immediately. The sprinklers work just as advertised and are easily installed.
Read more
Helpful
Comment Report abuse

Guest78
1.0 out of 5 stars unsatified
Reviewed in the United States on August 21, 2013
Verified Purchase
Worked for a few days. Water coverage is poor and two them dont even close by themselves at all. Couldn't recommend this product.
Read more
Helpful
Comment Report abuse

DA
5.0 out of 5 stars Perfect solution for our yard!
Reviewed in the United States on April 26, 2012
Verified Purchase
My husband just installed these last night and I LOVE them! Very easy to use and we had them installed in under two hours, with a toddler "helping" too!! No more running around to adjust the hose sprinkler and getting soaked. Simple, low-cost solution for any homeowner. (Our yard is about 1/4 acre, and we managed to get 80% of it covered with this combo pack.)
Read more
Helpful
Comment Report abuse
See all reviews
Pages with related products. See and discover other items: above ground garden