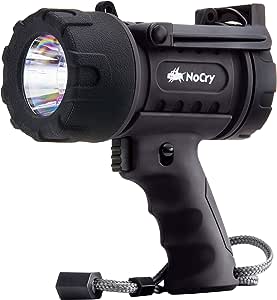 Visit the NoCry Store
4.6 out of 5 stars 894 ratings
Currently unavailable.
We don't know when or if this item will be back in stock.

The 18 Watt LED can be easily adjusted to 3 brightness settings, so you won't have to compromise on battery life when requiring less than full illumination: The Low (100 lumens) setting lasts approximately 20 hours, Medium (500 lumens) - about 12 hours, and High (1,000 lumens) - up to 6 hours. A beefy battery might just be one of the most important things in a flashlight, and with up to 20 hours on a single charge, this one has got you covered. Pro tip: Always plug the flashlight in after use to ensure full charge for when you use it next.

The flashlight also includes a detachable red light filter for 3 additional light options. Red light keeps your eyes adjusted for the dark and doesn't disturb others, including animals. With the illumination range from 90 to 300 yards, it makes for an essential addition to your outdoor gear or tool box.

In your home, outside, in the car… it’s THE flashlight for almost any situation

Thanks to its light weight and compact size, the NoCry Rechargeable Spotlight is designed for a wide variety of heavy-duty uses. Slips easily into backpacks for hunting, fishing, camping, spelunking, hiking or walking. Can also be stored on a boat, in a camper, or in your automobile (also includes the cables you need to recharge it in the vehicle).

With a charge that lasts up to 20 hours, so you’re always prepared for power outages, overnight camping trips and prolonged use in dark basements and attics. Convenient eyelets and a cord tie make storing, packing and carrying this flashlight easy.

There’s a lot of false information regarding lumen and brightness ratings out there. Even big brands are doing it and claiming a higher lumen rating than actually possible.

The amount of light which an LED light produces is determined by its wattage capacity. On average, an LED will produce 90 lumens of light per watt. To get a realistic estimation of the brightness of the LED, look for the "watts" of the LED light which you're assessing. If it doesn't list the type of bulb being used, assume 90 lumens per watt and multiply by the number of watts of the LED for real maximum brightness.

The NoCry Spotlight uses an 18 Watt CREE XHP-50.2 LED which has an efficiency of 165 lumens per watt; equalling a maximum output of 2,654 lumens. As 1000 lumens is sufficient to illuminate darkness over 300 yards, we have programmed our LED to shine at 1000 lumens for the maximum setting, giving 6 hours of run time at this brightness, maximizing the usability of our product.