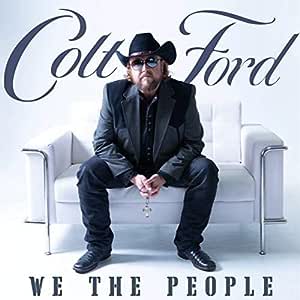 Colt Ford (Artist) Format: Audio CD
4.7 out of 5 stars 55 ratings
Amazon's Choice recommends highly rated and well-priced products.
Amazon's Choice for "colt ford cd"
See all 2 formats and editions Hide other formats and editions
Includes FREE MP3 version of this album.&nbspProvided by Amazon Digital Services LLC. Terms and Conditions. Does not apply to gift orders.&nbspComplete your purchase to save the MP3 version to your music library.
Available at a lower price from other sellers that may not offer free Prime shipping.

Out of the gate, Colt Ford s highly anticipated new single We the People, the title track from Ford s seventh studio album, quickly gained ground at terrestrial radio entering Billboard s Indicator chart just weeks after its release priming the pump for the new album. Another sampling from the disc Slow Ride, featuring #1 chart-topping artist Mitchell Tenpenny, launched with immediate success across all digital service providers with 500,000 plus streams the first week, top playlist placements and a music video to follow. With a decade-long reputation of pushing musical boundaries and featuring edgy, all-star collaborations on his ground-breaking albums, early indicators point to yet another hard-hitting album and soundtrack of positivity with We The People Vol. 1, from the country rap star. The 14-track disc is a seamless flow of modern country, southern rock, hip-hop/rap and pop, delivering an unbeatable musical blend and something for every fan. We The People is stacked with hits and features some of country s hottest rising stars and beloved legacy artists. A who s who of Nashville s most noted songwriters have contributed to the new album which fans have been anxious to hear. Returning to his roots, Ford reminds fans on the song I m Still Me that he hasn t strayed from where he s from and still stands by his core values - love of God, Country and Family. The autobiographical Lucky Scars, featuring Eddie Montgomery s rich baritone, is a look back at life and its many lessons. Where The Water Is and the comical Bass Lake That feature the exquisite musicianship and unmistakable vocals of the infamous Dan Tyminski ( O Brother Where Art Thou ). The video for the title track We The People (a unifying song about bringing people together no matter what color or race) is quickly becoming a fan favorite on CMT. Country darling and #1 hit artist Jimmie Allen joins Ford on the smooth as silk, bonfire classic Back To The Backroads, while another chart-topping newcomer Mitchell Tenpenny is featured on the sexy ballad Slow Ride. Ford s gratitude shines bright on the patriotic Red White Blue & Blessed, featuring Walker Montgomery, and Bring That W Back, is surely destined to be the rallying anthem of the season. Colt Ford has been recognized by such major media outlets as The Los Angeles Times, The New York Times, The Wall Street Journal, Rolling Stone, People and Billboard, amongst others, for his many achievements including repeatedly topping the Billboard Country Albums Chart, penning two #1 hits, selling over 2 million albums and surpassing 1 billion streams and hundreds of millions of YouTube views. Fan engagement across Ford s social media platforms continues to grow. He boasts a strong social media following of over 2.5 million followers across all platforms.