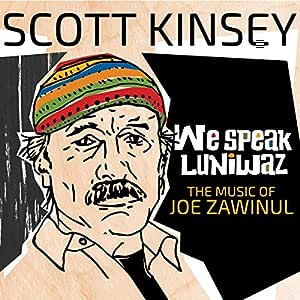 We Speak Luniwaz - The Music Of Joe Zawinul

KINSEY,SCOTT (Artist) Format: Audio CD
4.7 out of 5 stars 25 ratings
See all 3 formats and editions Hide other formats and editions
Includes FREE MP3 version of this album.&nbspProvided by Amazon Digital Services LLC. Terms and Conditions. Does not apply to gift orders.&nbspComplete your purchase to save the MP3 version to your music library.
Available at a lower price from other sellers that may not offer free Prime shipping.

Widely known as one of the most skilled keyboard players of his generation, Scott Kinsey is also one of the foremost interpreters of Joe Zawinul's rich musical legacy. As musical director of the Zawinul Legacy Band, Kinsey has delivered electrifying performances in celebration of Zawinul's ground-breaking work with Weather Report and the Zawinul Syndicate. On 'We Speak Luniwaz', his Whirlwind Recordings debut, Kinsey brings his expertise to bear on re-imaginings of seven scintillating Zawinul compositions, plus one by Wayne Shorter and two originals. Joined by electric bass phenom Hadrien Feraud, saxophone/flute master Katisse Buckingham and Hungarian drummer Gergo Borlai, this accomplished crew generates sparkling energy and percolating grooves on entrancing Zawinul fare like Black Market (Black Market, 1976), Fast City (Night Passage, 1980) and for the funky Cucumber Slumber, (Mysterious Traveler, 1974), Kinsey showcases Buckingham's skills as rapper with a testimony to Joe in a segment titled World Citizen. Special guests on this dynamic project include former Yellowjackets bassist Jimmy Haslip, former Weather Report percussionist Robert Thomas Jr., former Zawinul Syndicate percussionist Arto Tun boyaciyan and former Zawinul Syndicate drummer Michael Baker. Like Kinsey, they all speak Luniwaz. A prolific composer and imaginative improviser, Kinsey collaborated with the likes of John McLaughlin, Alphonso Johnson, Robben Ford, Dennis Chambers, Peter Erskine, Bill Evans, Oz Noy, Kurt Rosenwinkel, Tim Lefebvre, Thundercat, Flying Lotus and many others. The legendary composer and producer Bob Belden said: Scott Kinsey has taken the language of the synthesizer to the highest level in our modern times, as he is the first generation of keyboardists who developed electronically as opposed to the acoustic-centric classic piano model. Kinsey continues to push the envelope in exhilarating ways on his outstanding new release, 'We Speak Luniwaz'

Roy M. Leinfuss
5.0 out of 5 stars tribute of love to the master
Reviewed in the United States on October 10, 2020
on 3/8/14 i saw the zawinul tribute band at zankel hall at carnegie hall.when katisse did his rap over cucumber slumber,it was amazing and it did fit in the context of song and composition. if you want to hear straight up versions of songs, listen to the original or greatest hits, and that's for all artists all genres.... there are so many tributes to Joe,weather report, Wayne,Miles and so on... nice to hear different takes on songs and maybe they are filtered thru these players dna.... this is another great one!!!!!
Read more
Helpful
Comment Report abuse
See all reviews

J. MILLER
4.0 out of 5 stars Excellent except for......
Reviewed in the United Kingdom on December 3, 2019
Verified Purchase
...The dreaded rap which ruins the version of "Cucumber Slumber" and sounds so out-dated anyway. Apart from that one track it's all good and extremely good in a few places; the opening version of "The Harvest" is wonderful, possibly better than Zawinul's original on "Dialects". He knows all the exact correct synth sounds too - on "Between The Thighs" the synth sounds literally identical to the WR version. Hadrian Feraud plays a mean bass too, but Jimmy Haslip rules on his 2 tracks. Docked one star for the stupid rap. Otherwise recommended.
Read more
Report abuse