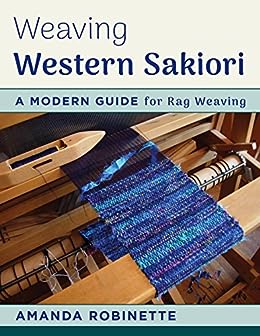 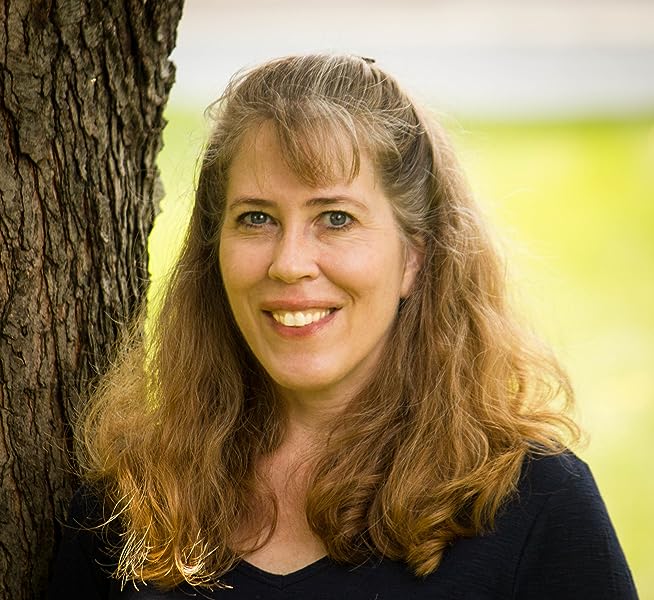 by Amanda Robinette (Author) Format: Kindle Edition
See all formats and editions
Sorry, there was a problem loading this page. Try again.
Read more Read less
Previous page
Next page
Due to its large file size, this book may take longer to download

Weaving Western Sakiori is a comprehensive guide to the wonderful world of Japanese rag weaving. Amanda's years of researching the history of Sakiori have lead her to a clear understanding of the techniques used for weaving Sakiori and to develop her own style of weaving Sakiori, which she shares with all of us in the projects suggested in the book. –Tom Knisely, author of Weaving Rag Rugs, Handwoven Table Linens, and Handwoven Baby Blankets -- Tom Knisely


True to its title, the book is an excellent "modern guide for rag weaving." Robinette has great tips on how to shop for rag-making at thrift stores and what kinds of garments and fabrics make good weaving rags. She covers rag preparation using different tools and techniques such as tearing and cutting. There are worksheets for project planning, including one for figuring how much rag weft you need, and there is a useful sett chart for weaving with different types of rags. The book includes tips on weft joins, beat, and use of temples, and a special section about rag weaving on rigid-heddle looms. The weaving instructions also include wet-finishing and drying techniques for rags of different fiber content.

If the historical perspective doesn't get you fired up for sakiori, the projects in this book certainly will. There are many sweet scarves, plus myriad household items, baby blankets, shawls, and even an elegant evening purse. Weave structures include plain weave, twills, and overshot, while materials range from cotton to silk and even include leather. As Robinette points out, her project instructions are only a starting point because your rags will be unique. And therein lies the beauty and intrigue of sakiori. -- Anita Osterhaug, Handwoven Magazine ― Handwoven Magazine, March/April 2019

It’s good to see a weaving book that covers a new topic, although really, Sakiori is probably as old as the hills. Author Amanda Robinette covers upcycled rag weaving from textile preparation and warp considerations through to the end of many projects. I’m particularly taken with the Wedding Dress Bed Runner. If you are a weaver and you’ve had a wedding dress tucked away in a box for decades, now would be a good time to take it out and refashion it into a beautiful piece of art that you can love every day. Weaving Western Sakiori will have you looking at your entire closet in a whole new way. Recommended By Tracey T., Powells.com ― Powells.com --This text refers to the paperback edition.

Amanda Robinette has spent the past seven years delving deeply into learning about and weaving sakiori. She has experimented with different fabrics and weave structures and focuses on making unexpected projects from rag weaving, including clothing. Her articles and projects can be found in Handwoven magazine, and she has been teaching and speaking about sakiori since 2014. She also shares her enthusiasm for sakiori and for weaving in general on her blog at westernsakiori.com. She resides in Mechanicsburg, Pennsylvania. --This text refers to the paperback edition.

As for the weaving instructions, I found enough help here to immediately take an old Japanese rayon tunic dress, cut it into ribbons, and weave a Sakiori scarf to my satisfaction on my rigid heddle loom. The advice on what yarns and weaving techniques will soften the drape of Sakiori is great. No one wants to make a scarf that feels like a rag rug.

I also appreciated the advice on how to calculate the yield from found fabrics and recycled items. This supports Robinette’s ecological point of view and aligns the Western Sakiori weaver with historical Japanese practice.

I am not an experiaced weaver: I’ve never touched a four shaft loom, but I find Amanda
Robinette’s four shaft instructions easier to understand than Knisely’s in his book on Rag rugs.

Whether a weaver will be “inspired by the projects in this book” depends on whether he or she likes the colors and the rags Robinette has chosen to weave. I don’t care for magenta, but with my own choice of weaving materials, I don’t have to use magenta.

Robinette has a lot of interesting ideas. A motivated Sakiori weaver will find a great deal of carefully presented advice in this book.
Read more
16 people found this helpful
Helpful
Report abuse

Russian Princess
2.0 out of 5 stars I love Sakiori but...
Reviewed in the United States on May 30, 2019
Verified Purchase
I teach Sakiori type weaving (not using Japanese traditional materials - we use old clothing). This book is just okay, and the projects are kind of clunky. For example, the scarves look too thick and stiff - not drapey as a scarf should be. The projects don't show a lot of finesse or artistry. There are so many creative things you can do with Sakiori, but this book is really about beginner's projects and not much more. The weaving in this book is pretty boring, but instructions are well thought out and detailed enough so you should be able to use your imagination and experiment. I just would have preferred a higher caliber of projects.
Read more
9 people found this helpful
Helpful
Report abuse

Emily Tennill
3.0 out of 5 stars Nothing you probably don't already know or can figure out
Reviewed in the United States on July 12, 2018
Verified Purchase
I was excited to see this book as I love the idea of using rags in weaving but don't have an appropriate loom for doing rag rugs. Thinking this would inspire me with more creative ideas, I was disappointed that there is nothing all that unique about the projects presented here. Many of them are downright unattractive to me. You may get more useful technique information on preparing and handling rags from other rag rug weaving books. The one technique that is covered well about sakiori is the part about using one or two picks of a thinner yarn between rag picks. The brief section on the history of sakiori was interesting.
Read more
6 people found this helpful
Helpful
Report abuse

Amazon Customer
3.0 out of 5 stars clarity
Reviewed in the United States on February 14, 2019
Verified Purchase
I found it difficult to follow. I did like the patterns very much.
Read more
Helpful
Report abuse

MarileeTop Contributor: Weaving
4.0 out of 5 stars Interesting concept, lacking in execution.
Reviewed in the United States on July 9, 2018
Verified Purchase
I have been very interested in utilizing no longer wearable or usable linens and garments, giving them a second life instead of going into land fills. Weaving old fabric strips is an ancient craft, practiced in Europe and Asia extensively, but perhaps less known here in the USA. although rag rugs are not unknown. This book attempts to fill the need and educate us in the ways of traditional weaving with cloth strips, in the Japanese style.

However, the book falls short in several important areas. While there is considerable attention paid to esthetic ideas, history and thoughts on cloth, there's not nearly enough practical instruction. There are few pictures or explanations on how to prepare fabric strips for weaving, basically cutting or tearing. Turning garments into weaving strips isn't an exact science, of course, but more general guidance and examples as to how to proceed would have been helpful.

As for the actual weaving, many projects are shown but are nearly impossible to replicate, as one's own rags will certainly be different than those shown. Worse, there's little explanation as to how to join strips, whether prior to weaving or during, except for a tee shirt rug, which has useful photos. Then there are the references to using a "floating selvage", with little explanation as to how, why or even what it is. It's suggested weavers may want to split their rag ends in the warp so as to reduce bulk while weaving, but how to do it is left to the weaver's imagination.

There is one page devoted to using a rigid heddle loom, and that is mainly about tension and bulk considerations. As for floor looms, there are tie up and treadling diagrams for each project, but you're on your own figuring them out.

I would have given this book 3.5 stars had I been able. It encourages and inspires giving Sakiori a try, but falls short in practical instruction.
Read more
8 people found this helpful
Helpful
Report abuse

Mary Whybark
1.0 out of 5 stars Did not buy this book.
Reviewed in the United States on August 8, 2020
Verified Purchase
Did not purchase this book
Read more
Helpful
Report abuse
See all reviews

Jayne Porter
5.0 out of 5 stars The ultimate guide to recycling materials
Reviewed in the United Kingdom on August 26, 2020
Verified Purchase
Thought this would help with Saori weaving plenty of ideas and tips although aimed ar Rigid Heddle.
Read more
Report abuse