A Wedding in Winchester (A Charlotte Holmes Mystery Book 5) and millions of other books are available for Amazon Kindle. Learn more 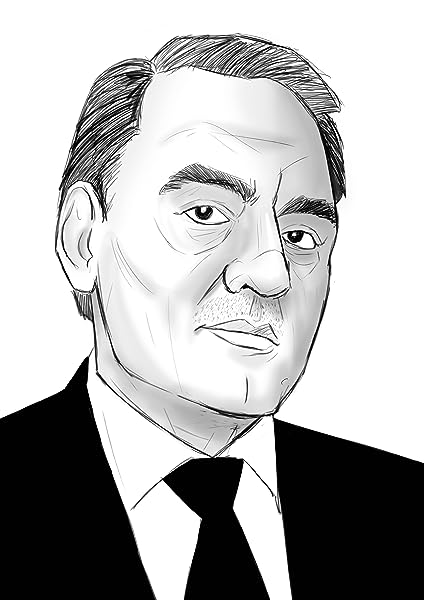 A Wedding in Winchester (A Charlotte Holmes Mystery) Paperback – April 6, 2021

by AM SARDAR (Author)
4.3 out of 5 stars 8 ratings
Book 5 of 5: A Charlotte Holmes Mystery
See all formats and editions
Sorry, there was a problem loading this page. Try again.

Start reading A Wedding in Winchester (A Charlotte Holmes Mystery Book 5) on your Kindle in under a minute.

Grady HarpTop Contributor: Children's Books
HALL OF FAMETOP 100 REVIEWER
5.0 out of 5 stars ‘My encounter with Charlotte had left me shaken’ – reunion after a decade!
Reviewed in the United States on May 9, 2021
Verified Purchase
Pakistani born British author AM Sardar began his career as a Medical Research Scientist followed by working as an IT Consultant, initially with the British Ministry of Defense and then the Japanese IT company Fujitsu. He has fifteen books published to date, directed toward a broad-spectrum audience and being widely accepted as books that share his fascination with both history and the arts. He has mastered the art of parody.

A WEDDING IN WINCHESTER is Book 5 in his Charlotte Holmes Mystery Series and once again Sardar finds the perfect balance between humor and mystery – a trait that he has mastered. His characters are inspired by the ever-popular Sherlock Holmes/Dr. Watson stories, but here the fun begins: Charlotte Holmes is the female version detective and Dr. Watan is the Indian physician version of Dr. Watson. And to add interest, this book is presented a Book 1 of The Kensington Quartet! More suspense.

Sardar’s concern for keeping his readers up to date is evidenced by his inclusion of the cast of characters that populate this series and a more in depth description of the story’s narrator – Dr JS Watan (his Dr. Watson persona!) who opens this novel with a note in 1912: ‘I did not think that I would pick up my pen again to make entries in these journals, the last entry being in 1903 in my home in the Balbir colony which seemed to be the final curtain on my relationship with Charlotte and Branwell Holmes. These words testify to the lie I have penned above as it was not the final curtain on my relationship with those two, there was an encore which I had not envisioned…’

The plot is best shared as follows: ‘A post-modern re-imagining of the Great Detective as Charlotte Holmes, a traumatized polymath, and her companion Dr Watan, an Indian doctor, as they investigate plots, coups and conspiracies during the British Raj in India. Annabelle Holmes, elder sister of Charlotte, is getting married but the bridegroom is missing and our heroes must solve the mystery to ensure the wedding goes ahead. Dark family secrets are revealed and brutal truths confronted in the opening book of the new arc.’

This is brilliant prose, a superb mystery with tongue in cheek humor that makes the novel not only exciting to read but also one of the more entertaining tales in print! Highly recommended. Grady Harp, May 21
Read more
One person found this helpful
Helpful
Report abuse

Nela
4.0 out of 5 stars Amazing mystery book
Reviewed in the United States on May 13, 2021
Verified Purchase
“A Wedding in Winchester” is the fifth book in the Charlotte Holmes Mystery series. After The Calcutta Quartet, author Am Sardar introduces this first one in The Kensington Quartet. For those who did not read the previous books, the author wisely provides a list of characters at the beginning, with details of each of their appearances in the series.

Although the series is named after Charlotte Holmes, a brilliant yet erratic polymath; the narration is in the first person, in the voice of Dr JS Watan, an Indian doctor; and the catching story takes place in London, in 1912.

This is a mystery book with an amazing and in-depth plot that left me on the edge of my seat with every turn of the page. It will definitely keep all readers guessing too!
Read more
One person found this helpful
Helpful
Report abuse

Tomasthanes
5.0 out of 5 stars Know the person you're marrying before you're standing at the altar
Reviewed in the United States on May 30, 2021
Verified Purchase
This is the fifth book in the Charlotte Holmes series. Unlike the previous books, this one is set in England rather than India (it is continuously cold and wet) and it's 10 years later than the events of the fourth book.

Dr. Watan's circumstances have changed. He's married again (but not to a Russian spy this time). His interaction with his new wife is restricted a handful of letters near the beginning of the book, then she fades away.

Dr. Watan is in England to further his training. His meager pay (by British standards) is barely enough to keep in fed and housed with the balance being sent to Rita back in India.

The first chapter opens with him meeting a young lady (Emily) who reminds him of Charlotte. She even carries a sword umbrella (ella, ella). He just met person he helped deliver back at Redoubt in Bombay.

He learns quickly that while Charlotte's daughter does not hate him, her mother still carries a deep and simmering grudge against him for choices he made in the previous book.

He encounters Branwell who had a run in with a band of pickpockets. Dr. Watan attends him in the hospital and sews him up. The members of the Holmes family seem slow to thaw out resentments.

The wedding in the title of the book is between Annabelle, Charlotte and Branwell's sister, and a (gasp) merchantman named Parsifal Bennet, the owner and proprietor of Parsifal's Joyful General & Haberdashery Emporium. I can only imagine what kind of a URL his website would have.

In continuing family business they (the Holmes') encounter their estranged mother, Lady Priscilla Carvary, president of the Merry Widows of Windsor Club, and another family member from the past, one Moorpeake.

Meanwhile, Count Zorkin and the Russian (Czarist) police are (separately) hunting for a promissory note drawn on a Jewish bank. This leads to an omnibus chase from one side of the Thames to the other culminating in a very satisfying resolution to all of the threads in the story.

One of the most significant lines in the book (and in the series of books) comes near the end from Branwell who says "Hmmm," he reflected. "perhaps we deserved it, Cawnpore and Allahabad and all that. I'm starting to be a little troubled by our rule of India. It benefits us greatly but I'm not sure it benefits you equally." Significant!

By the way, miraculously, at the end of the book, Branwell and Becky are still happily married.

Even better news comes from the author that there are more books in this series coming!
Read more
Helpful
Report abuse

Susel Dezzani
4.0 out of 5 stars I absolutely fell in love with this story!
Reviewed in the United States on May 15, 2021
Verified Purchase
I absolutely fell in love with this story! A Wedding in Winchester is one those books that grabs your attention from the very first sentence and it was hard to put it down until the satisfying ending.
The author is engaging, warm with his words and expressive when talking about the characters.
Asif M. Sardar is adept in his writing. I enjoyed every new page more than the previous one, as the author introduces new and interesting elements in his writing.
The storyline is easy to follow and the characters are not complicated but distinct. I enjoyed following the main characters from the first page to the last.
This is an entertaining book for both young and old readers. I definitely recommend this amazing mystery book!
Read more
One person found this helpful
Helpful
Report abuse
See all reviews
Back to top
Get to Know Us
Make Money with Us
Amazon Payment Products
Let Us Help You
EnglishChoose a language for shopping. United StatesChoose a country/region for shopping.
© 1996-2021, Amazon.com, Inc. or its affiliates