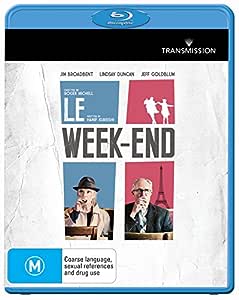 3.4 out of 5 stars
3.4 out of 5
420 global ratings
How are ratings calculated?
To calculate the overall star rating and percentage breakdown by star, we don’t use a simple average. Instead, our system considers things like how recent a review is and if the reviewer bought the item on Amazon. It also analyzes reviews to verify trustworthiness.
Top reviews

Marc O'Polo
2.0 out of 5 stars A Real Snoozer...
Reviewed in the United States on April 16, 2015
Verified Purchase
Literally: my wife dozed off during the middle third. If it wasn't for the too brief synopsis of this movie (displayed when we were trying to decide whether or not to watch it), we would not have had a clue as to what the story line was about. Even the title was misleading; I expected a bit of a French farce. Not so. For most of the movie, I couldn't decide whether Nick was a self-centered jerk or Meg was a cold fish. By the end of the movie, I decided that Meg was a dominant individual in this pairing and Nick was deeply insecure. And they were down-at-the-heels due to some very poor life choices. I like Jim Broadbent, nor do I fault either he or his co-star. I think they turned in good performances given the material they were handed. I particularly didn't like the director's handling of the audio: it seemed that either Nick and Meg were whispering to each other or they were being filmed at a distance; in some scenes I wasn't even certain as to whom was speaking. There was one scene in a restaurant where I thought it was the people in the foreground who were talking; it took me a bit of time to realize that it was Nick and Meg having one of their 'sotto voce' discussions arguments. (I couldn't tell the difference.) Finally, the denouement seemed somehow unrelated to the rest of the plot (such as it was); I came away with the impression that perhaps there was more to Nick and Meg's relationship than had been previously disclosed. Altogether, this was a most unsatisfactory film.
Read more
4 people found this helpful
Helpful
Comment Report abuse

TFM57
2.0 out of 5 stars Marriage does not have to be like this
Reviewed in the United States on May 18, 2020
Verified Purchase
The best part of this movie is the Trailer, it has the only funny lines but it is also very misleading. There is no joy in this movie. If marriage is this sad, then it should end...This from a person now married 45 years (since age 19) and still deeply in love. Marriage takes work as well as understanding, commitment and fun. This couple lost that long ago. Go watch something else unless you wish to be depressed.
Read more
One person found this helpful
Helpful
Comment Report abuse

Juian Child
5.0 out of 5 stars For Intelligent Experienced Romantics Only
Reviewed in the United States on July 27, 2015
Verified Purchase
ABSOLUTELY AND STUNNINGLY WONDERFUL! This is not a movie the typical American can enjoy. It is, by no means, an action-packed movie, nor will you find it laden with sex. If you have life-experience, if you have loved and lost and loved again or if you just have a hunger for intelligently-written dialogue, you will love this movie. For those who have visited Paris, it is a nice reminder of the positive aspects of the city, as well.
Read more
6 people found this helpful
Helpful
Comment Report abuse

gmamom
4.0 out of 5 stars Le Week-End in Paris doesn't solve all your problems.
Reviewed in the United States on February 24, 2015
Verified Purchase
Le Week-End is a close examination of a long term marital relationship riddled with the issues and personality quirks of an interesting, but somewhat self-absorbed couple. The performances were quite convincing with Jeff Goldblum doing his non-plussed best as the successful yet marginally intellectual old friend of the lead (Jim Broadbent). The cinematography captured Paris sites briefly and beautifully. Some humor, some poignancy, some frustration - covered a range of emotions and feelings. Not for action flick viewers, this film is more suited to those who enjoy character studies and slice of life movies.
Read more
4 people found this helpful
Helpful
Comment Report abuse

darrell
4.0 out of 5 stars Grandiose Movie
Reviewed in the United States on August 10, 2014
Verified Purchase
Well I kind of picked out a movie for the wife and I to see. I had not heard or read anything about this movie so I was taking a chance. The previews were great and with Mr Broadbent and especially Lindsay Duncan who we watched on the series Rome made me want to see this film. So we watched and loved every minute of this reestablish your love in your marriage, enjoy what the two of you can do and the beauty of sincere love and togetherness the two of you can have in marriage! Five stars for Jeff Goldblum also. A sweet character amongst the grand couple!!! Watch it and enjoy!
Read more
3 people found this helpful
Helpful
Comment Report abuse

C. F. Jung
4.0 out of 5 stars Excellent look at long term relationships!
Reviewed in the United States on March 11, 2015
Verified Purchase
It's really a film for adults who are 50+ in my opinion. An intimate look at a long term marriage that is unraveling and what keeps couples together thru all the BS that life throws at you! I only use 50+ with the idea that most people younger may not have the patience or experience to understand that relationships are more then great sex and everything is fine! If you're one of the young ones who get it...bravo!
Read more
5 people found this helpful
Helpful
Comment Report abuse

L. Brannel
5.0 out of 5 stars Change the game in Paris!
Reviewed in the United States on February 28, 2015
Verified Purchase
Wonderful casting. Always excited to see Jeff Goldblum cast in a movie because it will be quirky and intelligent. Lindsay Duncan was a beautiful and talented young actress and continues now with more mature roles. Here a loving husband and his discontented wife take themselves to Paris for a weekend. The wife throws some curves into the plans and the couple have to find a new way to relate. Challenging material delicately handled. Superb acting!
Read more
2 people found this helpful
Helpful
Comment Report abuse
See all reviews

Clare W.
4.0 out of 5 stars A Curate's Egg of a Film.
Reviewed in the United Kingdom on May 3, 2015
Verified Purchase
I think I misread the reviews in this film. I thought it would be a story of a late middle aged couple finding the romance and the passion they had when they first fell in love. I guess I was looking for a pink fluffy sort of film, but instead I got a gritty, disturbing movie that left me feeling the opposite of pink and fluffy. I found the husband a sad pathetic character who was desperately wanting his wife's love and compassion. The wife, to me, was totally fed up with her doormat of a husband and wanted excitement and romance in her life. They both wanted change but seemed to be stuck in their humdrum lives. Despite the ending I foresaw divorce in the not too distant future. (Yes I do know they were not a real couple). In summation I am glad I finally watched it and would recommend it as long as you are not expecting pink and fluffy.
Read more
One person found this helpful
Report abuse

Elleppi
4.0 out of 5 stars A really lovely, bittersweet and delicate mix of british and french touch
Reviewed in the United Kingdom on April 27, 2014
Verified Purchase
What a nice surprise! This film is nice, light, melancholic, sweet. It's filled with a sense of end and rebirth, memories and joy of living. The music, the acting, the definition of the characters (incuding a fantastic Jeff goldblum) makes this film a must have for those who loves films made of characters, setting and atmosphere, and not just plot.
The story unfolds not by a planned plot but following the rules of the hearts and relationships among charcters, so you feel constantly involved with their state of mind, in a pleasant way, with the right dose of drama, comedy and intimacy.
The closing scene is the perfect representation of the path they took to tell the story: not a resolution, but a moment of their life, which we don't know where it will lead them to.
A film full of enchanting suspension