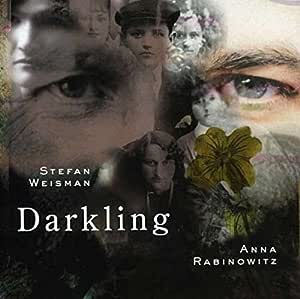 Save with Used - Very Good
$9.98
FREE Shipping on orders over $25.00 shipped by Amazon.
Arrives: Feb 16 - March 8
Ships from: Zoverstocks
Sold by: Zoverstocks

Stacked with conflicting themes and textured with vocal and string-quartet sequences that smolder or gleam, Darkling is a scuffed, allusive musical palimpsest. A memory quest and a testimonial to broken knowledge, the 85-minute opera grasps at a tapestry of lives left behind when a new wife bolts her marriage northeast of Warsaw, sailing steerage to toil in a hat factory on Broome Street. Several singers and reciting voices share her role, which gives a glimpse of Darkling's artistic devices, facing the atrocious void then left by German occupation and the Holocaust. Anna Rabinowitz culled the libretto from her book-length poem; with Stefan Weisman's taut, dexterous score and a bold staging by American Opera Projects, Darkling played to acclaim at the Classic Stage Company in 2006. A lustrous middle register runs from the prologue s cello theme through the singing of mezzo-soprano Hai-Ting Chinn, who's performed with City Opera and the Wooster Group. Bass-baritone Mark Uhlemann is forceful in Salvage of Coats, with Flux Quartet violinist Tom Chiu bowing overtone shards. Voices hover and parry, set in communal intimacy like radio drama, with Weisman's arias providing both tension and release. Furious recitation distracts at times from furious verse, and crackly announcements as if off worn acetates Before technicolor and TV...before Zyklon B, says a jocular one make ineffective dislocations. Throughout, the opera works tenaciously towards the privilege of awareness, however incomplete. The mind is its own place, the narrator, Anna, intones, and Darkling is deeply mindful work. --Alan Lockwood, TimeOut New York

Darkling is a story that has taken many forms, first as bits of memorabilia found in a shoebox, then as a book-length poem, to a multimedia experimental opera, to its current incarnation as an Albany Records CD. When writing the original poem, librettist Anna Rabinowitz was able to take the scraps of memorabilita and form a cohesive unit by creating an acrostic poem inspired by Thomas Hardy's The Darkling Thrush. The American Opera Project, with director Michael Comlish and composer Stefan Weisman then decided to turn Darkling into an opera. Weisman was intrigued by the acrostic form of Rabinowitz's poem and wanted to incorporate the acrostic form into the compositional process. Weisman and Rabinowitz are both New York City-based artists. The two-disc recording covers about one and a half hours of music. Performers include Maeve Höglund (soprano), Hai-Ting Chinn (mezzo-soprano), Jon Garrison (tenor), Mark Uhlemann (bass-baritone), Tom Chiu (violin), Philip Patyon (violin), Kenji Bunch (viola), Raman Ramakrishnan (cello), and Brian DeMaris (conductor). The narrator of the story is a woman, Anna, whose family had been murdered in the Holocaust. She rummages through old memorabilia in an attempt to piece together her family history and to rediscover herself. In the story, Anna's mother had hastily married in Poland before heading off to America. Yet much of the libretto features imagery and word-painting. The minimalist string quartet introduction set the dark tone for the opera. There are several other instances where the composer makes effective use of minimalist texture. For example, on track 8 of the first disc, the high A in the violin seems to simplisticly echo the mezzo-soprano who sings, they will not ask me why... And on track 3 of the second disc, the strings create a mood while the singers describe the pen's blueprint. Yet the score also has passages of lush melodies and folk tunes, as seen in tracks 4 and 5 of disc 1 (scattershot clips followed by a flashback of the wedding). The final track of disc 1, the multiple voices ask, who will remember what to forget? This CD is not easy listening, as the subject matter is quite heavy. There is no cohesive plot (though that only further illustrates the problem of memory). This is a weighty work that yields deeper meaning upon multiple listenings. --Tina Molly Lang, NY Classical Music Examiner

Eleanor
5.0 out of 5 stars A haunting, gorgeous work - a must-listen!
Reviewed in the United States on November 29, 2012
Verified Purchase
Stefan Weisman is at the forefront of a new generation of composers creating fascinating works for the voice, and Darkling is a must-listen in my book. I have heard his work live, and it's a real treat to have this in my collection and unravel the mysteries a bit further with repeated listenings. There's so much in it, and it's a masterful juxtaposition of luscious writing for strings, and haunting spoken and sung text. The performances are uniformly excellent. Very highly recommended!
Read more
One person found this helpful
Helpful
Report abuse

ffmd67
5.0 out of 5 stars Excellent opera!
Reviewed in the United States on November 19, 2011
Verified Purchase
The music is both inspiring and innovative. The quality of the CD is excellent and is well worth the money. Stefan Weisman is an awesome composer.
Read more
2 people found this helpful
Helpful
Report abuse

Anonymous
5.0 out of 5 stars Hear Darkling Now
Reviewed in the United States on December 1, 2011
Already a fan of Rabinowitz's book, Darkling, the CD has enhanced my appreciation for such an emotionally rigorous work of art. I delighted in hearing the words driven by Weisman's soulful music, and the voices, so human, so universally familial, and so desperate for a place and time to live. The Darkling CD is a testament to the power of collaboration and how poetry can be, not only lifted off the page and sung, but danced across eternity.
Read more
One person found this helpful
Helpful
Report abuse

GBRL
5.0 out of 5 stars Modern Opera
Reviewed in the United States on December 8, 2011
This album demonstrates some of the lively, exciting things that are happening at the fringes of a genre that otherwise appears to be stagnating. Weisman's score is truly inspired and evocative, and Rabinowitz's libretto matches it with a fragmented, expressionistic style that captures the flurry of thoughts and emotions in the air during the period in which the opera is set. If you don't get a chance to see a live production, be sure to buy this disk!
Read more
One person found this helpful
Helpful
Report abuse

Sharon Adolphson
5.0 out of 5 stars Darkling = Eccentric
Reviewed in the United States on January 25, 2012
I like the eccentric perspective taken on this soundtrack. Goes in so many interesting directions and at times it's hard to follow but I love the challenged of it!
Read more
Helpful
Report abuse
See all reviews