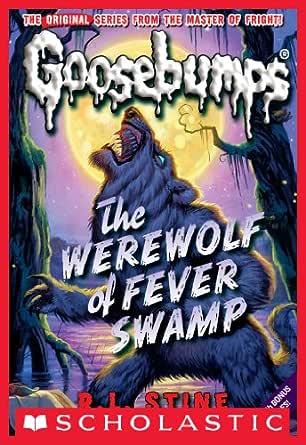 You've subscribed to Goosebumps! We will preorder your items within 24 hours of when they become available. When new books are released, we'll charge your default payment method for the lowest price available during the pre-order period.
Update your device or payment method, cancel individual pre-orders or your subscription at
Your Memberships & Subscriptions 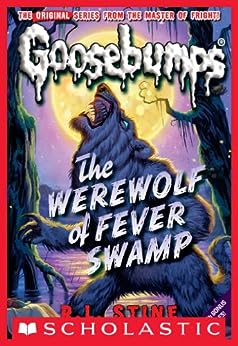 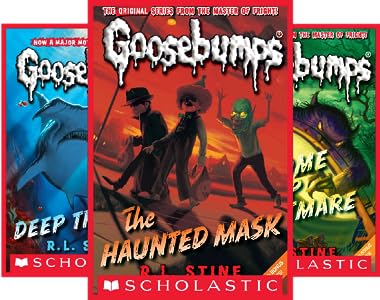 R.L. Stine's books have sold more than 300 million copies, making him one of the most popular children's authors in history. Besides Goosebumps, R.L. Stine has written series including: Fear Street, Rotten School, Mostly Ghostly, The Nightmare Room, and Dangerous Girls. R.L. Stine lives in New York with his wife, Jane, and his King Charles spaniel, Minnie. www.RLStine.com.
--This text refers to an alternate kindle_edition edition.

4.8 out of 5 stars
4.8 out of 5
339 global ratings
How are ratings calculated?
To calculate the overall star rating and percentage breakdown by star, we don’t use a simple average. Instead, our system considers things like how recent a review is and if the reviewer bought the item on Amazon. It also analyzes reviews to verify trustworthiness.

Christina
4.0 out of 5 stars Something to be said for childhood nostalgia
Reviewed in the United States on April 19, 2011
Verified Purchase
In the mid 90's the Goosebumps books were probably the most popular book series for kids (in a world who had yet to meet Harry Potter amazingly enough). I definitely remember thinking they were the end all beat all of children's lit. "Werewolf of Fever Swamp" was the first 'Goosebumps' title I ever read, and was the one I read again and again. It was my favorite, and to this day, as someone in their early 20's, it still holds a special place on my bookshelf.

But what makes it good enough to care about years later? Having gotten nostalgic for the books (years ago I have up my cardboard box of over twenty Goosebumps books to a younger cousin, and will probably never see them again) I decided to treat myself to a copy of my favorite one. True, it only took me an hour to breeze through, and was certainly not the same read from when I was eight, but I was actually surprised at how well the story held up.

What ultimately makes it work is the characterization. R.L Stine's kids always felt like kids, easy to relate to, and the "voice" of them, whether girl or boy, always sounded authentic. The stories were never *scary*, but definitely were creepy, and more often than not had a great sense of atmosphere and tension. The end was usually not what you saw coming, and yet managed to hold up over subsequent readings. Not all endings were happy, but were still a sly wink at the reader.

So, though a quick, light read, "Werewolf of Fever Swamp" is fun, especially to read aloud to a younger brother or sister who doesn't see the end coming. There are plenty of other books and movies that are "too scary for children". Goosebumps are for them.

Brian Childers
5.0 out of 5 stars love Goosebumps
Reviewed in the United States on September 20, 2016
Verified Purchase
I received mine from Amazon in perfect condition, no rips, or creases on the cover or pages within. The cover has some gorgeous artwork, that helps you visualize while reading.

The paper quality is top notch on the inside as well, and if you're a Goosebumps fan, you KNOW the story is as well. Highly recommended!
Read more

Debra Surbrook
5.0 out of 5 stars The Full Moon
Reviewed in the United States on November 6, 2012
Verified Purchase
The howls. The torn apart rabbit. The killed deer.
When Grady Tucker and his family move to thir new home in the Florida swamp, Grady is ready for action. He can't wait to explore the vast swamp with all the interesting wildlife. But just four days after moving in Grady hears something very weird at night. Howls. Like the howls of a wolf or a coyote. But after meeting two kids in the swamp, Will and Cassie, Cassie says something very surprising and weird. "There is a werewolf in the swamp," she says. "Those howls at night are the werewolf." At first, Grady does not believe them. But then there was the ripped apart heron in the swamp. Then the ripped apart bunny rabbit. And then the murdered deer. Everyone thinks Grady's new dog is responsible. After all, he showed up just about when the howls started. But Grady knows his dog is just a regular old dog. But he does not know who is the werewolf in the swamp. And the werewolf has been watching him ever since.
Read more
One person found this helpful
Helpful
Report abuse

Ashley
5.0 out of 5 stars GREAT TO GAIN READING CONFIDENCE!
Reviewed in the United States on July 1, 2016
Verified Purchase
I've been reading the series to my 8 year old and he loves them... I'm hoping when he's a little more fluid with his reading, these will keep him engaged to gain confidence to finish a whole chapter book!
Read more
6 people found this helpful
Helpful
Report abuse

Kimberly Elizabeth
5.0 out of 5 stars It was the best book ever
Reviewed in the United States on October 24, 2019
Verified Purchase
Logan-9 year old , A/R challenge . It was scary, because Grady got bit on the shoulder , and he became a werewolf. He liked being a werewolf because he could hang out with his best friend wolf (his dog)
Read more
Helpful
Report abuse

Patricia Evans-Bechtold
5.0 out of 5 stars Appropriate for age of reader
Reviewed in the United States on November 17, 2020
Verified Purchase
My granddaughter loves this book and started reading it right after she received it. My granddaughter is 10 and in 4th grade.
Read more
Helpful
Report abuse

K
5.0 out of 5 stars Good book!
Reviewed in the United States on November 9, 2019
Verified Purchase
Really fun books! Arrived quickly and packaged well! 7 year old read it all by him self and loved it!
Read more
Helpful
Report abuse

colm
5.0 out of 5 stars Awesome horror!
Reviewed in the United Kingdom on September 7, 2013
Verified Purchase
This book is my favourite in the classic goosebumps series. Full of surprises and twists. Worth every penny. Very well written. Some characters are not what they seem........
Read more
Report abuse

Amazon Customer
5.0 out of 5 stars Perfect
Reviewed in India on January 5, 2019
Verified Purchase
Excellent its beginning when I finish with it I ordered more left over parts
Read more
One person found this helpful
Report abuse

Rajesh_G
4.0 out of 5 stars Who's afraid of the big, bad wolf?
Reviewed in India on November 6, 2017
Verified Purchase
Unexpected twist at the end
Read more
One person found this helpful
Report abuse
See all reviews