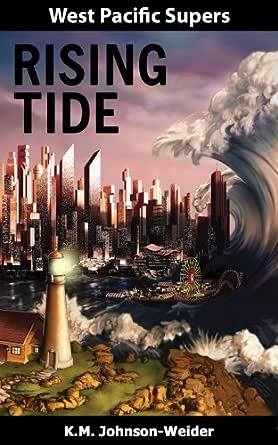 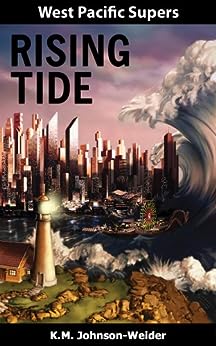 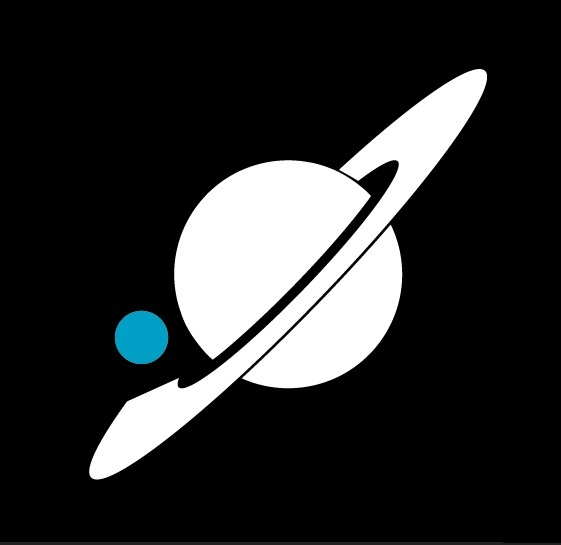 There are a lot of characters in Rising Tide, but each of them isdistinct.  Each one sees the world in a different way and each has adistinctive voice. Some of the key characters in West Pacific Supers: Rising Tide are as follows:

Seawolf is an obvious mutant who's still struggling with the anti-mutant sentiments she faced as a child, even though times have changed and the non-mutant Coast Guard liaison to the team keeps trying to ask her out.

Blue Star is a four-time inductee in the Superhero Hall of Fame who can save the world but can't salvage a relationship for the life of him. West Pacific Supers is his last chance to end his career on a high note.

Cosmic Kid is a cocky young super just coming on the team and looking to prove himself.

Camille's decade-long marriage is threatened by her unilateral decision to return to the team that once kicked her off for refusing to wear a miniskirt costume.

Dr. Noah Brandeis has a crazy plan to make geological history and, with the help of a few insane supervillains, he may just succeed.

K.M. Johnson-Weider has written two novels in the WestPacific Supers series: Rising Tide and Victory at Any Cost.Black Throne Conspiracy is an entirely newnovel set in the Ascension Galaxy, where future tech mixes with ancientmagics, some of them rooted in the shadowy recesses of time.
Read more

3.6 out of 5 stars
3.6 out of 5
29 customer ratings
How does Amazon calculate star ratings?
Amazon calculates a product’s star ratings based on a machine learned model instead of a raw data average. The model takes into account factors including the age of a rating, whether the ratings are from verified purchasers, and factors that establish reviewer trustworthiness.
Top Reviews

Todd
5.0 out of 5 stars Very human characters in a world where superheroes are real
Reviewed in the United States on March 16, 2016
Verified Purchase
Part professional athlete, part Hollywood celebrity, part law enforcement officer -- if you've ever wondered what about the behind-the-scenes lives of superheroes, then this is the book for you! The story is presented from the point of view of several of the characters, following their internal and external crises in a world filled with all of the supehero tropes - mutants, aliens, time travel, etc. As you might expect, they face off against several supervillains, but that aspect of being a hero is almost secondary to the fact that they're real people just trying to do their jobs.

The book covers the heroes dealing with the types of challenges we all face: family, relationship difficulties, inner demons, bureaucratic and political obstacles, money issues, and the like. It also delves into the extraordinary part of their lives in dealing with superhero team sponsorship, hostile reporters, ratings and status, injury and death on the job, and the moral quandaries of life in a world where super-tech and mutants exist. Each of the characters is unique and has interesting foibles and points of view about the world they live in and each other.

As speculative fiction, posing the question "what if superheroes were real", it does an outstanding job. It paints a world that feels very real, despite its fantastic nature. It also does well in presenting compelling characters, portraying them as very human (whether they are or not), and following their development. My only real complaint is that the book gives a little too much detail. It has a lot of throwaway one-liners referencing characters, events, or factions in the world that are never explored further (however, this is remedied by book 2 where they have a lot more established lore to draw upon).

If you're a fan of superheroics then definitely add this to your collection.

Michael
4.0 out of 5 stars Genre bending take on Superheroes
Reviewed in the United States on February 28, 2012
Verified Purchase
I wish 1/2 star ratings were available because I'd really prefer to give this book 4.5 stars instead of 4.

There is a lot that works in this book and a few things that miss the mark somewhat but on the whole it is a solid effort and easily one of the better entries in the genre.

Basic Plot Summary (Spoiler Free):
The West Pacific Supers (WPS) are a group of officially sanctioned heroes based in the fictional city of West Pacific, California. The WPS is shaken by the sudden loss of several of its members in a surprise attack aimed at its senior and most powerful heroes but must pull together to find those responsible and bring them to justice. At the same time, the team is investigating the theft of explosives so potent they rival that of a nuclear weapon. Meanwhile, the WPS must recruit new members to rebuild its strength and standing in the eyes of the public. The team receives some help from vigilantes, non-sanctioned heroes, who provide timely intelligence from the streets and badly needed backup when they're needed most. Time is running out for the heroes to find and recover the explosives before the villains responsible use them for purposes unknown.

Surprisingly, this merely provides the backdrop for the meat of the novel. The book is really more concerned with the heroes themselves and their personal trials and tribulations. The primary characters here are Cosmic Kid, a newly recruited teen hero, Blue Star, an older hero pulled out of semi-retirement to lend the shaken team a steady and experienced hand, Camille, a one-time West Pacific Super lured out of retirement, and Seawolf, a veteran WPS member who struggles as much with the outward manifestation of her power as she does with the villains she fights. Although these are the core characters that the novel follows, there is a well developed set of secondary characters from the Vigilantes (Truthfinder, The Goalie, Midnight, Whisperer, White Knight, Cupid, and Samurai) to the support staff of the WPS.

The world of the West Pacific Supers is a place where superheroes have been elevated to the level of fame of sports figures and movie stars in our world. They have fan clubs, agents who negotiate contracts and endorsements, and PR people to plan their 'product placement.' This extends to the teams such as the WPS. Younger heroes start in Teen groups (farm leagues) and go through a draft and ranking process that determines their place in the big leagues. The super teams are also ranked based on the foes they've vanquished, property damaged prevented (or allowed/caused), and the casualties they take each 'season'.

This sounds somewhat hokey but it is played straight and it works. The main characters are all likeable but each is flawed or limited in some way that makes them more real and relatable. The novel's focus is squarely on the heroes and the plot takes a definite backseat to character development. There is a lot of room for additional novels in this universe. The author teases us with bits and pieces of the alternate history of this world and there are a lot of characters introduced that appear only briefly.

That said, the story isn't without some weaknesses. As mentioned by other reviewers, the author decides to tell rather than show a major event and completely skips the aftermath with the hand waving of "Months later..." This may have been an effort to shorten a relatively long book but it has the effect of diluting the impact of the team's failure to stop a particular event. Also, the villains, with the exception of Dr. B and the final villain, are fairly one-dimensional and forgettable.

These are relatively minor nitpicks, however, and the the novel as whole is an engrossing and entertaining read.

T. Lee
5.0 out of 5 stars West Pacific: Rising tide
Reviewed in the United States on January 3, 2012
Verified Purchase
I do a lot of reading and this book exposed me to a new genre. I found the premise interesting - it's the U.S. future, pretty much as we know it, except that cities are protected, not just by police, but by teams of superheroes. How a superhero becomes part of a team, how the team functions, or doesn't function, and what villains there are to subdue, are all part of this book. The nefarious plots that must be foiled are an interesting backdrop for the allure of the characters. The action is suitably unpredictable and diverting, while the characters provide the most entertainment. Some of them are normal in appearance and have extraordinary powers. Some are mutants with unusual physical characteristics that both enhance their powers and cause inconveniences and embarrassments. How the supers deal with their chosen profession of saving the world, while trying to save their sanity and have a life, makes for some intriguing reading.

The characters are multi-dimensional, each with very distinct personalities; sometimes tugging at your heart, sometimes making you grit your teeth, sometimes drawing a laugh. The dialogue really shines; revealing their personalities and providing the real meat of this book. I found myself thinking about being a superhero, or being married to one. And just who IS Dr. Annie Sterling? The novel kept me focused, and when I finished reading, I really didn't want it to end.
Read more
One person found this helpful
Helpful
Comment Report abuse
See all reviews from the United States

Amazon Customer
5.0 out of 5 stars Super!
Reviewed in the United Kingdom on July 26, 2013
Verified Purchase
Really catchy easy to get into read, excellent characters with a real feel for the genre.
The supers are really interesting - not so much for their powers - but for their motivation and background . Excellently written with a lot of nods to pop culture and the accepted formula for writing comics.

Like a good comic but better motivation and character depth - but no pictures except the ones in your head. Loved it would recommend it to anyone who likes comics.
Read more
One person found this helpful
Helpful
Sending feedback...
Thank you for your feedback.
Sorry, we failed to record your vote. Please try again
Report abuse

Monkeynaut
4.0 out of 5 stars Superhero soap without the cheese!
Reviewed in the United Kingdom on April 11, 2018
Verified Purchase
Very good and similar to Dr
ew Hayes's superpowers .I found the action sequences to be well choreographed and lots of behind the scenes action as well.The concerns of the individual team members were very real as well which made the world that much more realised than a lot of other superhero books.I would recommend without reservation and will be getting future books for sure!
Read more
Helpful
Sending feedback...
Thank you for your feedback.
Sorry, we failed to record your vote. Please try again
Report abuse