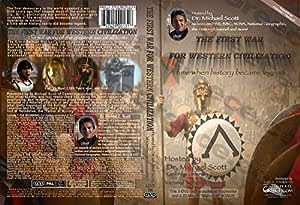 Hosted by Dr. Michael Scott (PBS, BBC, NOVA, National Geographic, History Channel) and narrated by Patrick Frost. A perfect gift for the history enthusiast and great television companion for the hit movie "300" and "The 300 Spartans." THE FIRST WAR FOR WESTERN CIVILIZATION, a time when history became legend! EPIC, 8-EPISODE HISTORICAL DOCU-DRAMA SERIES (3-disc DVD set in the PAL format for viewing in Europe, Australia, India, Brazil, China, and Africa). No Subtitles The First War for Western Civilization is a full historical account behind the conflicts of the ancient West (Greece) and the ancient East (Persian Empire) and their profound influence over the last 2,500 years on today's continuing conflicts between West and East (Middle East/Iran); ex 9/11. Background: The first democracy in the world spawned a war 2500 years ago that shaped most of the world today, particularly our politics with the Middle East. The Greco-Persian Wars have given us some of the most iconic moments in history such as Leonidas and the 300 Spartans at Thermopylae, the Marathon Run and a huge legacy today in politics and many other areas (i.e., 9/11). Presented by Dr. Michael Scott of Cambridge University, with contributions from nine other experts and four researchers and using the latest research, satellite positioning, and imagery, the series gives complete coverage of the story of the Greco-Persian Wars. Included is a detailed analysis of two of the oldest mysteries in history itself, what really happened at the Battle of Marathon and what really happened to King Leonidas and his 300 Spartans at Thermopylae. EPISODE DESCRIPTIONS Episode 1: THE BEGINNING: Our modern connection to this period, the importance to us here and now. The three major players, Athens, Sparta and Persia. Greece & Persia, where each came from and what made them different to each other. A closer look at Athens and the beginnings of Democracy. Episode 2. TREACHERY: The Spartans and their unique position in Greece. How Greece & Persia came in to conflict. The disloyalty of Histiaeus. The Ionian Revolt, Kimon and Miltiades in Athens, meeting Isodice, Athenian betrayal, the first Persian Invasion. Events leading up to the Battle of Marathon including the mystery of Marathon. Episode 3: MARATHON: The Battle of Marathon Episode 4, RISE AND FALL: Some myth busting about how the Greeks beat the Persians at Marathon after losing every Battle up to that time. The Marathon Run, war heroes, the fall from grace of Kimon’s family, prison, bankruptcy, incest, recovery and marriage. Athens builds their fleet. Episode 5, THE GREAT INVASION OF XERXES: The Great Persian Invasion of Greece by King Xerxes, the construction of the bridges over the sea at Hellespont and the canal at Athos,and the lead up to the Battle of Thermopylae, days 1 and 2. The betrayal of Leonidas. Episode 6: THERMOPYLAE AND SALAMIS: The disaster of Thermopylae and sacrifice of the lives of Leonidas, his 300 Spartans and other Greeks, trying to delay the enormous Persian forces of King Xerxes. What really happened there? Were the 300 Spartans always on a suicide mission? The evacuation of Athens, Spartan timidity and indecision. Victory at the naval battle of Salamis Themistocles brings on the naval battle. The lead up to the Battle of Plataea. Episode 7: THE DECISION IN GREECE: Stabilization and the lead up to the Battle of Plataea. The Battle of Plataea and the pledge made there. The new League of Greek Allies (Delian League), Kimon made commander in chief, Battle of Eurymedon (Kimon, the Conqueror of Persia), death of his wife Isodice, Ostracism (exile) of Kimon, his return to power, the death of Kimon and the Peace of Callias/Kimon. Episode 8: THE AFTERMATH AND LEGACY: Was it all worthwhile? Less than 50 years after the death of Kimon, why did the mighty hoplites of Kimon and Leonidas become the hirelings of Asia? The legacy of Greece. The legacy of Sparta. BONUS: "Making of" Special

Frederick Gould
5.0 out of 5 stars 300, the untold story.
Reviewed in the United States on March 26, 2014
Verified Purchase
Could also have been called, "Kimon, the man history forgot". Gave it 5 stars purely on content, an excellent detailed presentation of the full story of the Greco-Persian War, would also be fantastic for students studying the period. Covers everything from an introduction about the Greeks, the Persians, Athenians and Spartans to the the aftermath and legacy of the war. Told with cutaways of drama to the life of Kimon, son of Miltiades.

Puts aside the myths (e.g. Delphi Oracle) and legends (movies like 300) and even analyses several major events and gives a clear indications of what happened and why. Great research (e.g. from Dr Chris Matthew, author "A storm of Spears") and even though I thought I knew everything about the period, I even learned a lot. Great analyses in particular of the Battle of Marathon and the 300 at Thermopylae. Leonidas was never on a suicide mission, by Day 3 he thought he could win, even though he was being surrounded (and most importantly, Leonidas had plenty of warning and time to plan an astonishing victory).

Going to watch it several times, so much detail, right down to how the Greek Hoplites held their spears.

NGato
5.0 out of 5 stars Five Stars
Reviewed in the United States on August 18, 2014
Verified Purchase
Excellent history of the Greco-Persian conflict. Well presented and in depth
Read more
Helpful
Comment Report abuse
See all reviews from the United States