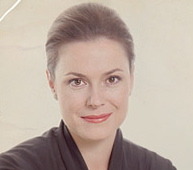 Praise for The Westhampton Leisure Hour and Supper Club:
"Fascinating." -Don Imus, Imus in the Morning
"Not a dropped stitch...One of my top five favorite books." -Bonnie Grice, NPR
"Finely crafted, inherently absorbing, and highly recommended historical novel that will prove to be enduringly popular.' - The Midwest Book Review
Praisefor The Art of Devotion

"A revival of elegance and grace, reminding us of an erawhen all literature was lyrical, with a fluidity that makes it appearsong-like. Samantha Bruce-Benjamin's debut places her in a class with some ofthe best literary minds, including F. Scott Fitzgerald, whose Gatsby was aclear source of inspiration." - The Examiner

Samantha Bruce-Benjamin is the author of The Art of Devotion, an Examiner and Bookreporter Best Book of 2010, and The Westhampton Leisure Hour and Supper Club. Born and raised in Edinburgh, Scotland, she holds a Master of Arts with Honors in English Literature from the University of Edinburgh. A former Random House and BBC literary editor, she divides her time between New York and Edinburgh, where she is currently reading for a PhD at the University of Edinburgh.

Start reading THE WESTHAMPTON LEISURE HOUR on your Kindle in under a minute.

3.4 out of 5 stars
3.4 out of 5
22 global ratings
How are ratings calculated?
To calculate the overall star rating and percentage breakdown by star, we don’t use a simple average. Instead, our system considers things like how recent a review is and if the reviewer bought the item on Amazon. It also analyzes reviews to verify trustworthiness.
Top reviews

Gail
3.0 out of 5 stars I was very disappointed with the book
Reviewed in the United States on August 4, 2015
Verified Purchase
I was very disappointed with the book. I thought the hurracaine was going tro be a major part of the book. Instead is was a long, drawn out love story. I actually bought the book as my local library said when a book is self published it takes at least 6 months before they buy it. Also, if they don't get a lot of requests for a particular book they don't purchase it. I met my husband in West Hampton and thought it would be very intriguing to hear about the hurricaine. WRONG!
Read more
Helpful
Comment Report abuse

Amazon Customer
1.0 out of 5 stars One Star
Reviewed in the United States on December 16, 2016
Verified Purchase
Did not like the book the way it was written
Read more
One person found this helpful
Helpful
Comment Report abuse

Amazon Customer
5.0 out of 5 stars Read it
Reviewed in the United States on November 5, 2015
Verified Purchase
A complex, beautifully written novel that demands to be read!
Read more
Helpful
Comment Report abuse

Marc S
2.0 out of 5 stars despite it being predominantly a love story in the tone of Romeo and Juliet morphed ...
Reviewed in the United States on August 29, 2015
Verified Purchase
I too heard the author being interviewed on Imus and thought this would be an interesting fictionalized account of an actual event. The story itself was interesting, despite it being predominantly a love story in the tone of Romeo and Juliet morphed with Kathy and Heathcliff. However, the telling of the story was unnceccesarily repetitive, often confusing and pointlessly laborious. The narcissism of the period notwithstanding, the women were weak, the men not much stronger and the hurricane, although completely devastating, was never a dominant presence other than to end the book. I had the feeling throughout that who ever had edited the book insisted it be of a certain length in order to be marketable, thereby causing Bruce-Benjamin to add empty filler just to stretch the content. The book should have been better given the story line. It is one of the rare books I think would make a better rainy day movie visualizing the period, people and events, with all the twists and flashbacks being observed. It would also have been over in 90 minutes. Instead it left me disappointed and upset that reading it took hours of my time over days to finish.

That said, there were some beautiful metephors of the everlasting peace after death and transformations of souls into spiritual beacons memorialized in the heavenly stars.
Read more
Helpful
Comment Report abuse
See all reviews

JBD
5.0 out of 5 stars Captivating – could not put it down….
Reviewed in the United Kingdom on July 7, 2015
Verified Purchase
Absolutely loved The Westhampton Leisure Hour and Supper Club, from the moment I picked it up to read, I simply did not want to put it down. Beautifully written from start to finish with fascinating characters, all of whom I loved in different ways. You are invited and taken on a journey with the Society Hostess, Serena Lyons before the great hurricane of 1938 hits Westhampton, as she longingly awaits the return of Kit Peel. In the final five minutes you learn the life, secrets, twists, tragedies and destinies of the Host, Hostess and Summer Visitors which leads them to the last party of the season at The Westhampton Leisure Hour and Supper Club. There are so many parts to this novel where you feel their journey has been a part of your own journey in life. I’m delighted to have been invited along to The Westhampton Leisure Hour and Supper Club, the last party of the season you definitely do not want to miss. What have been the five best moments of your life?........
Read more
One person found this helpful
Report abuse

ED
5.0 out of 5 stars Exquisitely beautiful and captivating read
Reviewed in the United Kingdom on July 7, 2015
Verified Purchase
I loved every minute of this book. Masterfully crafted so that the story unfolds at a pace which reveals just enough to keep you absolutely entranced, but doesn't give too much away of its intricate plot. I couldn't wait to turn each page and reach the next section. Exquisitely beautiful. Best read I've had in ages. I'd highly recommend it.
Read more
One person found this helpful
Report abuse

barbara ward
5.0 out of 5 stars the westhampton leisure hour and supper club
Reviewed in the United Kingdom on July 7, 2015
Verified Purchase
What a book! I loved it from the start to its heart rending conclusion. Samantha Bruce-Benjamin's beautiful writing is reminiscent of a bygone era.
Read more
One person found this helpful
Report abuse

Francesco
5.0 out of 5 stars Delightful page-turner
Reviewed in Italy on August 5, 2015
Verified Purchase
A fabulous book, filled with historical detail and wonderful characters. Samantha's writing was both beautiful and poetic. I particularly liked the way she unravelled the story of the characters leading up to the hurricane. A real page-turner.
Read more
Report abuse
See all reviews