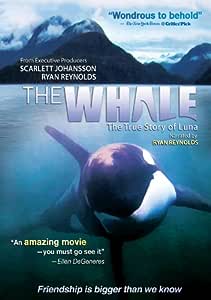 Ryan Reynolds (Actor), Docurama (Director) Rated:
NR
Format: DVD
4.6 out of 5 stars 176 ratings
Available at a lower price from other sellers that may not offer free Prime shipping.

THE WHALE is the true story of a young killer whale, an orca nicknamed Luna, who makes friends with people after he gets separated from his family on the rugged west coast of Vancouver Island, British Columbia. As rambunctious and surprising as a visitor from another planet, Luna endears himself to humans with his determination to make contact, which leads to laughter, conflict and unexpected consequences.

"There is a gossamer lyricism to THE WHALE..." --The New York Times

"Funny and moving and unforgettable. Everyone should see this film." --Ric O'Barry, star of The Cove

4.6 out of 5 stars
4.6 out of 5
176 customer ratings
How does Amazon calculate star ratings?
Amazon calculates a product’s star ratings based on a machine learned model instead of a raw data average. The model takes into account factors including the age of a rating, whether the ratings are from verified purchasers, and factors that establish reviewer trustworthiness.
Top Reviews

Mike H. - Austin, TX
4.0 out of 5 stars Heartbreaking
Reviewed in the United States on December 25, 2018
Verified Purchase
This film was fascinating, yet heartbreaking. I believe the lesson here is not so much about "Love" and "Friendship", the lessons we ALL should take away from this is that when governments and bureaucracy get involved, most times it spells failure and disaster. For example, the Coordinator of Mammals for the Canadian Oceans & Fisheries said something to the effect of 'When it comes to mammals, I always tell people to Stay Away ... let nature take its course', yet later in the film, we learn that under her direction (as Coordinator of Mammals), The Canadian dept of Oceans & Fisheries) decides they're going to capture Luna and sell her to Sea World! Are you kidding me ?!?! This woman is supposed to be a well educated science-minded professional who should know that this is nothing short of Animal Cruelty.
What ever happened to the PhD whale expert with the million-dollar boat, complete with scientific crew aboard, who offered to bring Luna back to her Pod - At NO expense to the Canadian government. His proposal was shot down by the Canadian Dept. of Ocean & Fisheries. What?!?!! I say, Shame on the Canadian government for murdering a mammal of an endangered species.

Brandon
5.0 out of 5 stars An Amazing Event that tells of true Human Folly
Reviewed in the United States on February 16, 2019
Verified Purchase
What an incredible story! And all of the footage too - Amazing!

I can't believe this happened and in the end, points to nothing other than how humankind cannot cooperate with each other to resolve something of importance.

I mean, WHAT??? We're going to capture him and 'try' to get him back to his family but if that doesn't happen, I guess we will just have to give him over to SeaWorld. My God, this is just an incredible story of intelligent wildlife being caught in the net of human drama and inevitably politics while the majority of people just want the right thing to be done and just can't because of the systems that are in place among their own daily lives.

So sad but a truly remarkable story of real-life events.

G. M. C.
VINE VOICE
5.0 out of 5 stars BEAUTIFUL MOVIE - TRUE STORY ABOUT LUNA: THE WHALE THAT JUST WANTED TO BE WITH HUMANS ! ! !
Reviewed in the United States on April 9, 2016
Verified Purchase
What a beautiful, yet sad movie on whales - one in particular! The best of this movie is the fact that it is all true, every bit of it. It shows one of those cases where you are damned if you do, and damned if you don't. This adorable young male (Luna) got stranded all by himself from his pod, up off the coast in British Columbia and unbelievably, all he wanted to do was have friends and companionship, just like people ! ! It is so obvious that he was lonely and craved someone to show attention to himself and oh, how Luna loved to play! His calls at night, alone out in the channel are heartbreaking and sound mournful, but if he heard or saw anyone, he would come rushing to them, to actually be loved and play !! This is a wonderful movie for all ages; of course, you will enjoy, laugh and inevitably cry over poor Luna's loneliness, as everyone thinks they know the answer as to what to do about him, but Luna knew better than anyone else - he just wanted to be friends with people. I will watch this terrific movie a lot of times, when I just need assured that friendship is wonderful for anybody or any being ! ! !
Read more
6 people found this helpful
Helpful
Comment Report abuse

avidreader
5.0 out of 5 stars Magical Canadian Whale Tale About Friendship
Reviewed in the United States on August 25, 2019
Verified Purchase
I align with the tribal members’ belief that this solo whale, Luna, was supernatural. His presence and struggle to find a “pod” brought joy and wonderment to everyone except misguided nonbelievers. What an incredible story, what stunning surroundings, do not miss this film! The way the narrative was structured, and Ryan Reynolds’ narration, made an important story great. So much more than a documentary — truly a textured exposition of man’s — not the whale’s — limited understanding of nature and any species but his own.
Read more
One person found this helpful
Helpful
Comment Report abuse

Gustavo Bonilla
5.0 out of 5 stars The importance of kinship
Reviewed in the United States on August 20, 2018
Verified Purchase
Lumped with family entertainment either by design or a very broad algorithmic brush by Amazon, this tender film may be even too complex for the adults watching it, to allow them to articulate what they believe the film is about. But if you are lucky to have youngsters around watching it, there are valuable life lessons that may be gain from its one hour and 25 minutes in length.
I for one tried to interpret also, like the lucky ones who actually saw Luna raising its eyes from the water, why it behaved like it did. It's easy to fall prey to the story manufactured by the film's editor, and swallow the whole line and sinker. After 20 minutes of watching it, I told myself, "what are you doing?! It's a whale...allow the story coming from the left field, which was how the First Nations mythologized its presence in their beautiful Vancouver sound, to be the mystical guide and not Reynolds' voice".

Then the story became more personal and transcendental...

The value of kinship developed between a young whale and a community because of circumstances beyond their understanding and control placed them together at a moment in time, -the right moment, and the right time- to connect at levels that most humans in the documentary recurred to anthropomorphized their own feelings and not the other way around (that of the whale's if we could call them "feelings"), because well, only whales know what they mean, and how they mean it.

That visceral unspoken connection that tangles friends, family, or lovers, can transcend walls, and for a first time viewer of the film, that is the lesson learned.
Read more
One person found this helpful
Helpful
Comment Report abuse
See all reviews from the United States

Alan, Stoke
5.0 out of 5 stars Definitely Watch This Film
Reviewed in the United Kingdom on December 2, 2015
Verified Purchase
This a breathtaking true story. Everyone should see it.
Read more
One person found this helpful
Helpful
Sending feedback...
Thank you for your feedback.
Sorry, we failed to record your vote. Please try again
Report abuse

keith mitchell
5.0 out of 5 stars Thoughts we all need to explore
Reviewed in the United Kingdom on January 22, 2014
Verified Purchase
This movie shows an issue with many implications for the way we view the world as Nature and the limits of our present understanding. What are we? What kind of relationship do we really have with everything around us.
Read more
One person found this helpful
Helpful
Sending feedback...
Thank you for your feedback.
Sorry, we failed to record your vote. Please try again
Report abuse

sukekiyo
5.0 out of 5 stars 人と友達になりたかったシャチの別編集バージョン
Reviewed in Japan on May 25, 2013
Verified Purchase
前作より感傷を抑え気味ですが愛らしさはそのままです。だからやっぱり切ないですね。
こちらにしかない映像もありルナファンなら見る価値があるでしょう。
Read more
One person found this helpful
Helpful
Sending feedback...
Thank you for your feedback.
Sorry, we failed to record your vote. Please try again
Report abuse
Translate review to English