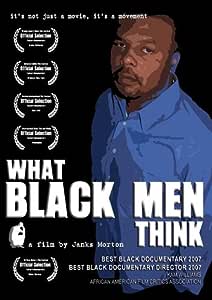 IYAGO ENTERTAINMENT GROUP Presents WHAT BLACK MEN THINK - An In Depth View of How Myths, Stereotypes and Misrepresentations render Black Men Non-Necessities in their Communities and Families... In the most provocative Black film of the year, Janks Morton presents a searing examination of the role that myths, stereotypes and misrepresentations have played in the decimation of modern era black relationships, and how the symbiotic relationship between government, the media and black leadership perpetuates misinformation to further marginalize the role of black men in society. Since the triumphs of the civil rights legislations of the early 1960's havoc and decimation has been wreaked on the Black family with a specific devastation on the Black man. With negative imagery of the media, the failed policy of the great society and modern era black leadership abandoning tenets that historically held the community together, a new form of mental slavery has perpetuated an undeclared civil war in the Black Community...

4.4 out of 5 stars
4.4 out of 5
87 customer ratings
How does Amazon calculate star ratings?
Amazon calculates a product’s star ratings based on a machine learned model instead of a raw data average. The model takes into account factors including the age of a rating, whether the ratings are from verified purchasers, and factors that establish reviewer trustworthiness.
Top Reviews

Kurt
5.0 out of 5 stars Brilliant!
Reviewed in the United States on September 14, 2007
Verified Purchase
This video boldly confronts what is accepted as fact about today's black man - and demonstrates how much of what we think is true, is myth. Scene after scene shows us what the black community says about it's self and how that just doesn't square with the facts: prison, HIV, inter racial marriage, alimony payments, etc. In one scene, the camera shows us over and over members of the black community saying that there are more black men in prison than in college, when the fact is that for every black man in prison, there are four in college. More importantly, the video deals with the why and that involves following the money, because there are those who are cashing in big by keeping an intellectual status quo, that isn't real. Broad range of experts, footage from civil rights era, music - this video will keep anyone engaged. This is a story that must be told
Read more
37 people found this helpful
Helpful
Comment Report abuse

C. J. DESOUZA
5.0 out of 5 stars Buy this VIDEO
Reviewed in the United States on June 16, 2019
Verified Purchase
Very informative and debunks many stereotypes from the racial media and institutional basises from Western Society mainly in this establishment call AmeriKKKa. This man and his crew is very on point with FACTS!
Read more
One person found this helpful
Helpful
Comment Report abuse

Lady D
4.0 out of 5 stars SPEECHLESS!!!!
Reviewed in the United States on October 9, 2007
Verified Purchase
I was speechless!! I sat with a few friends and watched this film in amazement of the information I was hearing. When I say that we were all astounded by this enlightening experience, you had to be there. We all had our mouths open, jaws dropped in disbelief. I have loaned my dvd to family members, who themselves were shocked. I have spokent to my childs teacher and suggested that she view it, then speak on it and share with her class. Our children need to be educated about the real truth of the black community. I have been pushed to do my own research on issues that I hear in the media. We all need to do the same and stop believing that the media has our best interest. "THEY DON'T"! I will be sending out this DVD as gifts. Janks Morton thank and please continue to share your knowledge. Job well done!!
Read more
3 people found this helpful
Helpful
Comment Report abuse

Bernard from MD
5.0 out of 5 stars Powerful Information!!
Reviewed in the United States on September 21, 2007
Verified Purchase
The DVD, "What Black Men Think," is a powerful compilation of information that goes a long way to dispel many of the myths and mischaracterizations of the black man in America. The DVD, which is very professionally done, has a unique presentation of information that holds your attention from beginning to end. The opinions and thoughts offered by the vast array of individuals featured in the DVD--from the everyday black man in the barbershop to ivy league black professional academics--are extremely thought provoking. This DVD really gives you a lot to think about. Every American--black and white...male and female--should see this DVD. I'm telling everyone I know to watch this DVD!!!!
Read more
4 people found this helpful
Helpful
Comment Report abuse

Edward J. Gabrielse
3.0 out of 5 stars Interesting Perspectives
Reviewed in the United States on January 18, 2008
Verified Purchase
This is a compilation of remarks from a number of successful black men who are leading a movement to get the black community into an era of self help. Many are people like Juan Williams (Enough) and Bill Cosby who have already stated a position on this issue. The DVD suggests that many of the problems of blacks have been exagerated by those who have a vested interest in the continueing subjagation of black men. For example, the question is asked, "Are there more black men in jail or in college?" Because of media hype, the general consensus is jail, but in fact not only overall, but by age group segmentation, there are infinitely more in college. That answer does not help some social service agencies, for example who depend on the black male as a client base. While the concept and content is interesting, the production values are a bit mediocre.
Read more
4 people found this helpful
Helpful
Comment Report abuse

Robert F. Henry
4.0 out of 5 stars Renewing the mind set of men incarcerated
Reviewed in the United States on September 22, 2007
Verified Purchase
I am a Protestant Chaplain in a State Correctional Institution and I'm deeply troubled by the increase of young black men entering the prison culture with no hope, no vision and no family. What black men think made me aware of the many progressive achievements that have been villified and dismissed as inconsequencial. The awareness that there are more black men in college than incarcerated needs to be stated in all of the correctional institution. The myth that more young black men are incarcerated than educated needs to be heard.

I will be showing What Black Men think to my Matures Men's Ministry and Young Men's Ministries and Black History book club.

We need to change the mindset that it's alright to be in prison and not use the greatest tool to man. The human mind. This DVD will help the thinking process begin.

Brian
5.0 out of 5 stars Great
Reviewed in the United States on May 14, 2013
Verified Purchase
I stumbled across this video while channel surfing and the title grabbed my attention. I'm as black as any other black man but being of mixed heritage and a mixed neighborhood and a private school education, have all had the effect of leaving me somewhat disconnected from the larger community. Add to that mix that I was raised as a catholic means I was also not part of the black church. Though I love my people there are many times when I felt isolated. I am also not someone who feels a need to watch TV or be in the know as far as news. the good is hard to find and the bad shows up no matter how much you avoid it. So when I saw this I was intrigued. I learned a lot about myself and about our community and I learned to appreciate both much better.
Read more
Helpful
Comment Report abuse

danny
4.0 out of 5 stars great documentary but not has good as expected.
Reviewed in the United Kingdom on January 13, 2014
Verified Purchase
The hype surrounding this genius will have you expecting something like the matrix movie. It's not like that at all. It's merely a standard documentary with some excellent ground breaking insights and facts pertaining to Black men.

This doc should definitely be in one's collection.
Read more
Helpful
Sending feedback...
Thank you for your feedback.
Sorry, we failed to record your vote. Please try again
Report abuse