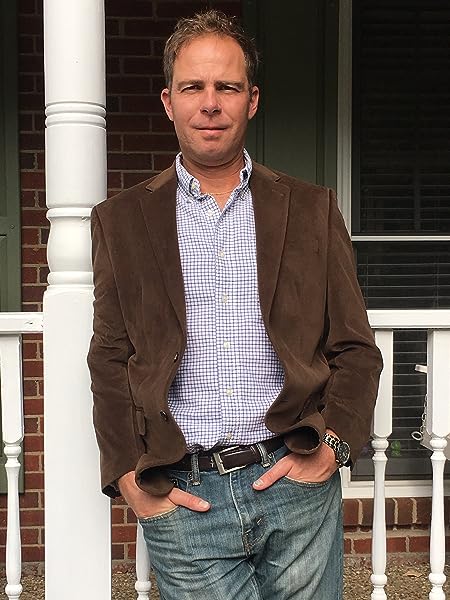 'Historical fiction at its finest that makes the reader want to learn more about the time and the people who lived there, and those who left.' (Booklist, STARRED review)

'In this enchanting allegory, Markert (All Things Bright and Strange) crafts an imaginative tale of the Dust Bowl . . . Markert creatively portrays the timeless battle between good and evil, making for a powerful story of hope and redemption.' (Publishers Weekly)

'What Blooms From Dust is thought provoking, entertaining and ultimately satisfying. . . those who read this book will appreciate Markert's knack for storytelling, his fleshed out characters, and his ability to make you think.' (Southern Literary Review)

James Markert lives with his wife and two children in Louisville, Kentucky. He has a history degree from the University of Louisville and won an IPPY Award for The Requiem Rose, which was later published as A White Wind Blew, a story of redemption in a 1929 tuberculosis sanatorium, where a faith-tested doctor uses music therapy to heal the patients. James is also a USPTA tennis pro and has coached dozens of kids who’ve gone on to play college tennis in top conferences like the Big 10, the Big East, and the ACC. Learn more at JamesMarkert.com; Facebook: James Markert; Twitter: @JamesMarkert.

4.4 out of 5 stars
4.4 out of 5
63 customer ratings
How does Amazon calculate star ratings?
Amazon calculates a product’s star ratings based on a machine learned model instead of a raw data average. The model takes into account factors including the age of a rating, whether the ratings are from verified purchasers, and factors that establish reviewer trustworthiness.
Top reviews

savingsinseconds
4.0 out of 5 stars Beautifully symbolic and full of imagery
Reviewed in the United States on August 26, 2018
Though it’s missing the rainbows and sunshine of most contemporary novels, this one is full of symbolism and beautiful imagery. It’s a treasure in words. As with Markert’s book The Angel’s Share, the characters in What Blooms From Dust would likely be overlooked in more refined stories. I love that about his books! This story focuses on Jeremiah Goodbye, an escaped convict who survived a botched execution. The Dust Bowl era becomes somewhat symbolic of the deserts of the soul. When life and love have torn up the soil beyond repair, what happens next?

Jeremiah’s journey reminds me a little of the Cain and Abel story if there was a love triangle thrown in. That aspect of the story seemed a bit unnecessary for me. There was a curious supernatural or paranormal element of the plot that held my interest! I highly recommend What Blooms From Dust to for fans of Samuel Parker’s Coldwater, or novels by Billy Coffey or James Rubart.

I received a copy of this book from the BookLook program. A positive review was not required. Opinions shared are mine.

Laundry Whispers
5.0 out of 5 stars There’s something to be said for an author that can take layers of grit and dust and weave it into a memorable story.
Reviewed in the United States on July 2, 2018
This is the second book about the Dust Bowl I've read in the last 12 months. Honestly, it's the second book about the Dust Bowl that I've read in my entire life. You would think that this is something I would have read about more. I mean, I'm knowledgeable about this time period both from family stories as well as choosing to study the history, but I've not come across a lot of fiction that is specific to this era. I've talked before about my family history of this period in American history here. My Daddy is technically a dust bowl baby born in the summer of '39. I think, from a personal standpoint, this would be difficult time period to incorporate into fiction. I mean there are only so many ways you can describe dust ya know? Both books I've read have been well written and engaging but . . . dust.

There's something to be said for an author that can take layers of grit and dust and weave it into a memorable story. However, much like the layers of earth that peeled up to create the dust this story had layers that needed to be peeled up and sometimes I just didn't 'get' it. Some things became clearer over time, sorta like digging out after a duster, but some things remained buried just out of my grasp. Some of this I feel was intentional, because with a story like this there are certain things that I believe should be left to the reader. However, I think some of it was because I was in the middle of a week of chaos that limited reading time and so my take on this story was disjointed. Despite that the story did peel itself up and dust me with completeness. I feel like for a moment in time I lived the dust, felt it's grit on my skin and in my hair. I smelled it's earthiness and staleness. I felt it's despondency. For a brief period of time I was Nowhere, Oklahoma.

I really enjoyed this book. It gets into your head and onto your skin. Nowhere, Oklahoma brings out both the good and bad in people. And in life. It doesn't matter that it happened 80 years ago, or yesterday, hard times bring people together or tear them apart. Sometimes, they do both. The Goodbye twins are the perfect reminder that things aren't always as them seem. That second chances are sometimes first chances to make things right. That just because we believe the lies we tell ourselves doesn't make them truth. And through all of this, community is everything. This book has so many layers and you ultimately decide how deep you want to peel them back. The reader decides how much they want to truly invest. And investment is worth if. And reading it again is almost a requirement.

I was provided a complimentary copy of this book by NetGalley. I was not compensated for this review and all thoughts and opinions expressed are my own. I was not required to write a positive review.
Read more
2 people found this helpful
Helpful
Comment Report abuse

Stephanie
5.0 out of 5 stars What Blooms From Dust
Reviewed in the United States on July 1, 2018
Jeremiah Goodbye is known as the Coin-Flip Killer in Oklahoma's Panhandle in 1935. Just as he was about to be executed by electric chair, a twister developed from a dust storm that knocked down the prison walls. Escaping with only a slight shock, Jeremiah makes his way back home to Nowhere, Oklahoma by the flip of a coin. The shock did something to Jeremiah, something for the better. Jeremiah no longer has such bad nightmares, nor can he see the darkness in men's souls so clearly as he did before. On his way to Nowhere, Jeremiah inadvertently picks up a boy, Peter, who has limited speech but understands everything happening around him. In Nowhere, barely anyone wants Jeremiah back, especially his twin brother, Josiah who turned him into the police to begin with. Nowhere has been ravaged by the dust bowl, turning the once prosperous town to dust. The people of Nowhere have been beaten down by the constant dust storms when a particularly bad duster rolls through, the town finds that Jeremiah and Peter may be just what they need in order to survive.

An amazing story of the Dust Bowl infused with magic and mystery. The town of Nowhere, Oklahoma grabbed me and was a character itself. Sold to people as Majestic, Oklahoma the town transformed, fought back and reemerged throughout the story. Jeremiah's characters is an enigma, but one that I really liked. Without learning his full story until near the end, I was continuously pulled into the many mysteries that surrounded his strange life. Jeremiah feels guilt for the death of the four men he was accused of killing, but swears he didn't actually kill them, he is able to see the bad and good in people and know their fate in life as well as being able to shield people from some of the bad that comes along. Peter was another favorite of mine, insightful and caring, bringing kindness even though he has not been shown much during his life. Even though the characters and the touches of magic engaged me the most, I did learn a lot about the dust bowl era. I had never heard of the Black Sunday dust storm and the devastation that it brought to an already ravaged area. I imagine that it would have had similar effects on the people attempting to live in the area as it did to the people of Nowhere as the residents became upset, mean and slowly lost their willpower. In Nowhere, several miracles occur after the Black Sunday dust storm that help breathe life back into a dying town. Overall, a unique historical fiction book incorporating magical realism and distinctive characters.

This book was received for free in return for an honest review.
Read more
2 people found this helpful
Helpful
Comment Report abuse
See all reviews from the United States