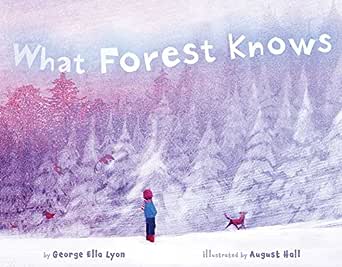 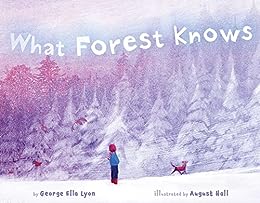 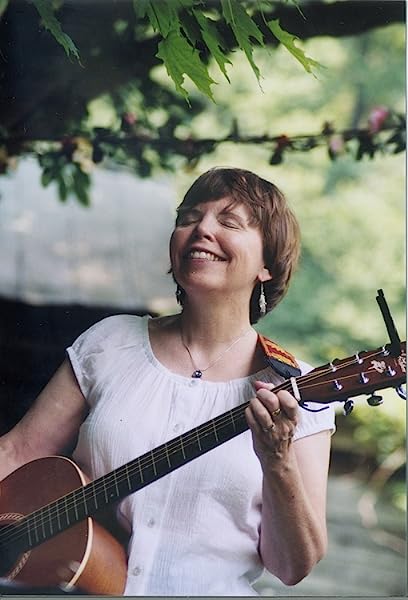 An extended poetic appreciation for what goes on in a forest through the seasons. "Forest knows waiting,…Forest knows waking,…Forest knows growing,…[and] Forest knows gathering in." This lyrical tribute makes note of the changing textures, colors, animals and activities in this beautiful, mysterious world. From buds and birds to moles and centipedes, there is much to see at any time of the year. Hall's painterly Photoshop illustrations, some created over actual photographs, match the poem's mood. Often hazy, just beyond the edge of realistic, they give the impression that there's still more to be seen. And there is. Parts of an exploring dog appear in each image—coming into the picture or just leaving, hidden behind a tree or partially obscured by a deer's leg. Only toward the end is the whole (and wholly enthusiastic) dog revealed, as well as the child who accompanies it through the forest. Then a double-page spread closes in on the dog's face, which totally expresses its joy at exploring this world of interesting smells. "Forest knows everything belongs. / YOU, too." The final page turn invites readers to appreciate this walk through a forest year as much as the poet does. Lyon's ability to see the connections among things and her affection for the natural world, amply demonstrated in earlier works, shine through this latest offering. (Kirkus Reviews October 1, 2014)

Who could resist Lyon’s invitation to “Make friends/with a path/threading/through woods?” Her tender, lyrical observations of the natural world (“Forest knows leaves,/held out like hands,/cupping sunlight…”) are clear, unpretentious, and true. Hall injects some levity by introducing a big red dog to his photoshopped illustrations. Encourage children to keep an eye on the canine’s tail traversing the pages! Readers see the forest in all seasons, all weathers, all times of day, from the ground to the treetops scraping the sky. The text rolls deliciously off the tongue, and the furry animals practically beg to be stroked. Simply beautiful.–Miriam Lang Budin, Chappaqua Library, NY (School Library Journal October 2014)

This meditation on the natural world as a unified whole is distinguished by Lyon’s (Planes Fly!) graceful verse. Hall (Keeper) brings it to life with a wandering child and a big, bounding dog. In every spread, hints of the dog can be found, its tail or back legs disappearing down a new trail. Lyon’s images of winter are telegraphic: “icy branches/ frozen waterfall.” When spring comes, “soft life pushing through/ hard wood,” the dog disappears behind a tree. Scumbling and combing bring textures to the fore. Spring mist is followed by summer richness (“Forest knows growing,/ going forth”) and then by deepening fall (“Forest knows/ gathering in,/ letting go”). “Forest knows/ everything belongs,” concludes Lyon, as Hall gives readers their first close-up of the dog—it, too, is part of nature. “You, too,” Lyon adds, as the child throws a snowball for the dog to chase. Lyon’s words offer an antidote to the human-made, high-stimulation world, and a way for readers to understand that they belong, too. (Publishers Weekly October 6, 2014)

The change of forest seasons subtly flows forward as an exuberant red dog ties together the days, appearing on most pages—sometimes as just a tail, paw, or nose—as he explores the woods’ nooks and crannies. The prolific Lyon’s prose poetically describes this world along with the dog, dwelling on lists of animals and their yearly activities, while naturally introducing vocabulary: fledge, ripple, burrow, and more. Hall’s illustrations emphasize animal viewpoints, whether it is a bird’s-eye view of a foggy, leafless sea of branches threaded through with a creek, or the yellow-green grass where centipedes wander. The colors of the broad two-page spreads give tone to the passage of time: soft in spring, deep and burnished in fall. A boy trails his pet at the beginning and end, giving the woods some personalized scale. Children will delight in following the eager canine and in identifying the fish, opossum, and deer he spots. This ought to hold its own with other books about the way a year unfolds. (Booklist November 15, 2014)

George Ella Lyon is the author of Trucks Roll!, Planes Fly!, and Boats Float!, cowritten with her son Benn. Among George Ella’s other books are the ALA Notable All the Water in the World and What Forest Knows. A novelist and poet, she lives with her family in Lexington, Kentucky. Visit her online at GeorgeEllaLyon.com.

August Hall has brought his creative talent to both Pixar and Dreamworks. He lives in Hollywood, California.

George Ella Lyon is the author of Trucks Roll!, Planes Fly!, and Boats Float!, cowritten with her son Benn. Among George Ella’s other books are the ALA Notable All the Water in the World and What Forest Knows. A novelist and poet, she lives with her family in Lexington, Kentucky. Visit her online at GeorgeEllaLyon.com.

August Hall has brought his creative talent to both Pixar and Dreamworks. He lives in Hollywood, California. --This text refers to an alternate kindle_edition edition.
Read more

Jennifer Beth Paterson
5.0 out of 5 stars A great way to connect with nature from the warmth of your home!
Reviewed in the United States on March 2, 2015
Verified Purchase
Love this book! The illustrations are beautiful and fun, they feel like a walk in the woods. The cute dog, only a presence in the illustrations (not the text) brings a real personality to the pictures and can be fun to find in some of them. The thing I love the most about this book is that it's set in and explores wilderness and the cycle of seasons. Lyon's words, as ever, delight the heart and mind.
Read more
2 people found this helpful
Helpful
Comment Report abuse

M. Simonne
5.0 out of 5 stars A book for all ages.
Reviewed in the United States on April 11, 2016
Verified Purchase
Beautifully written and illustrated....my 5 year old grandkids loved the story and loved looking for signs of the dog. We had to stop and examine and talk about each page. The ending is a great and funny surprise! George Ella Lyons has combined nature, life and poetry all in one very special trek through the woods. What a great way to teach children the wisdom of the forest.
Read more
Helpful
Comment Report abuse

Kris13
5.0 out of 5 stars Fun and educational!
Reviewed in the United States on March 26, 2020
Lovely book! My 18 month old loves this and we get it at the library so often I’ve decided to buy a copy! She loves finding the dog hiding on each page and enjoys all the different animals. When she’s older this will be a great way to tak about seasons! I love when we find accurate and educational books for her!

People who like this should check out books by Dianna Hutts Aston and Kate Messner!

Bob Walch
4.0 out of 5 stars Change is a constant in the forerst.
Reviewed in the United States on February 7, 2015
Follow the year with this picture book that shows what happens in the woodlands during each season. It is not a typical "change of season" book but shows animals, plants and humans and how the forest keeps tabs on everything. I like the illustrations here a lot more than the actual text which is OK but not really special or memorable.