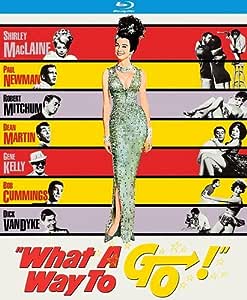 Secure transaction
Your transaction is secure
We work hard to protect your security and privacy. Our payment security system encrypts your information during transmission. We don’t share your credit card details with third-party sellers, and we don’t sell your information to others. Learn more
Details
Ships from
Amazon.com
Sold by
Amazon.com
Return policy: This item is returnable
In most cases, items shipped from Amazon.com may be returned for a full refund.
Read full return policy
What a Way to Go [Blu-ray... has been added to your Cart

All Louisa May Foster (Shirley MacLaine, Two for the Seesaw) wants is a man to love and grow old with. But she keeps meeting and marrying men with a desire to strike it rich and a habit of dying soon thereafter. A spectacular lineup of Hollywood s legendary stars appeared in this delightful and romantic camp comedy, including Paul Newman (Paris Blues), Robert Mitchum (Man with the Gun), Gene Kelly (An American in Paris), Dean Martin (The Silencers), Dick Van Dyke (Mary Poppins) and Robert Cummings (The Chase). J. Lee Thompson (Kings of the Sun) directed this colorful comedy that is pure delight from beginning to its all-too-soon ending. What a Way to Go! was nominated for two Academy Awards including Costume Design for Edith Head s gowns worn by lovely Miss MacLaine and Moss Mabry s men s wardrobe worn by the legendary male leads. Shot in glorious cinemascope by iconic cinematographer Leon Shamroy (Prince of Foxes, Daddy Long Legs).

4.7 out of 5 stars
4.7 out of 5
647 global ratings
How are ratings calculated?
To calculate the overall star rating and percentage breakdown by star, we don’t use a simple average. Instead, our system considers things like how recent a review is and if the reviewer bought the item on Amazon. It also analyzes reviews to verify trustworthiness.

B. Shirts
5.0 out of 5 stars A very fun, and funny Family movie.
Reviewed in the United States on February 6, 2020
Verified Purchase
This is one of those "olden days" movies from my childhood, and certain scenes from it have stuck with me decades later, so I decided to buy it.

It really has something for all ages, parents won't be bored, and they will "get" more from the movie, and kids will be delighted, yes, even all these years later. It's sweet, it's sad, it covers a variety of living situations, it's Doris Day! Honestly, great little fun movie for all ages. It would be especially fun to watch with kids.

K. R.Top Contributor: Photography
5.0 out of 5 stars One of the funniest movies
Reviewed in the United States on July 1, 2016
Verified Purchase
This is one of my favorite movies to watch. I've probably seen it at least a dozen times over the years. The sheer absurdity of the trials and tribulations that Shirley MacLaine's character goes through in each of her marriages is hilarious - as are the manner of accidental death for each of her husbands. I'm really happy to have this DVD in my collection.
Read more
12 people found this helpful
Helpful
Report abuse

Liz McGregory
5.0 out of 5 stars I LOVE THIS MOVIE, A GEM and CLASSIC!!!!
Reviewed in the United States on March 4, 2018
Verified Purchase
I first saw this movie as a child. A classic Shirley MacLaine. And to finally find it again, so worth the purchase to add to my "classics" movie collection. So please when it arrived. Opened package and watch it right away. Plus so many great and handsome movie stars, Dean Martin, Paul Newman, Robert Mitchum and more. Thank you seller, item as described, arrived on time. I will definitely purchase from again, especially for those long lost treasures in film now on DVD.
Read more
3 people found this helpful
Helpful
Report abuse

calboy1
4.0 out of 5 stars lite hearted comedy with some truth to some lives
Reviewed in the United States on July 24, 2019
Verified Purchase
the acting is superb and Shirley McClaine is her befuddled best..trying to avoid the one thing she is destined to have even if she doesn't want it!! Has some reflection in truth and real-life when some stories exist of those seeking wealth and miss it by inches and those who have it and seem to see it as a curse and do what they can to escape its trappings!!! Are humans ever happy??
Read more
One person found this helpful
Helpful
Report abuse

N.A.Crawford
4.0 out of 5 stars Interesting flick
Reviewed in the United States on September 5, 2011
Verified Purchase
Out of all the movies I've seen with Shirley, this one is perhaps my absolute favorite one of her other than The Apartment and Some Came Running. The others are good, but I tend to feel sorry for her characters. But in this one, even though she has some experiences, you can't help but applaud her somehow. In this one, she plays sort of a black widow.The movie starts where she goes to the IRS building to presumably give away her fortune. She meets men, influential sometimes, sometimes not, but somehow she makes them into accomplished men in their own rights, she marries them but somehow mostly through their own greed and ambition, they end up dying.In Robert Mitchum's case, he had just given up his wealthy lifestyle, but while he was milking the cow, he went to a steer instead of the lady cow and lost his life. Yet in spite of it, she moves on to someone else that does well for themselves but at the end, I believe she ended up happy and this time with kids and with the first man she started dating. Interesting piece of work.
Read more
One person found this helpful
Helpful
Report abuse

Shannon
5.0 out of 5 stars Such a cute movie!
Reviewed in the United States on December 31, 2013
Verified Purchase
It's one of those star-filled comedic fantasies that got released to draw in crowds due to big names and not plot, but "What A Way to Go!" is an oft-overlooked high point from a ho-hum genre. The plot — a young woman who just wants to live a simple life, but through a series of twists, keeps falling into wealth — is told through various film tropes, like a screwball silent film, a French foreign language film, an MGM musical fantasy, and others. The film is clever, moves well, and has a lot of my favorite actors. It's worth watching just for Shirley MacLaine in her prime, with great costumes and sets. I had never seen this film until 2 years ago, and now "What a Way to Go!" is one of my favorite movies!
Read more
8 people found this helpful
Helpful
Report abuse

JC
5.0 out of 5 stars A movie for the fashion-obsessed!!
Reviewed in the United States on January 25, 2021
Verified Purchase
Despite the all-star cast, it's the clothes that really shine in this movie. They are OUTSTANDING! If you love great fashion, this film is a must-see.
It's also funny, which is a nice break from ooohing and ahhing over the clothes.
Read more
Helpful
Report abuse

Benjamin J Burgraff
4.0 out of 5 stars Opulent, Frothy Showcase for MacLaine and her Men!
Reviewed in the United States on July 8, 2005
Verified Purchase
"What a Way to Go!" is such an entertaining showcase of vivacious star Shirley MacLaine's talents as a comedienne, dancer, and singer that it's hard to believe that the original script was far darker, and intended for Marilyn Monroe!

A tale of an innocent who dreams of a 'simple life', marrying progressively richer men who leave her an ever richer widow, is the kind of tongue-in-cheek farce that European filmmakers relish, but was unfamiliar to American audiences of the early sixties. Writer Gwen Davis' original story was written to satirically echo Monroe's own marital misadventures, and might have provided the star her best vehicle since "Bus Stop". But Monroe's career took a tragic nosedive, culminating with her death, at 36, in 1962, leaving Fox with a script, a director (J. Lee Thompson), and a film in preproduction.

Gifted songwriting team Betty Comden and Adolph Green, fresh from transferring their B'way hit, "Bells Are Ringing" to the screen, saw the script, and were invited to rework it as a comic vehicle for MacLaine. The talented actress, who had achieved major stardom in "The Apartment", was being given a major build-up by Fox, who wanted to showcase her untapped skills as singer/dancer, as well as in comedy. Thus a lighter, more dazzling "What a Way to Go!" was born.

Fox spared no expense on the production, with over 70 Edith Head costumes, choreography by Gene Kelly, and a new song by Jule Styne...but they balked over Frank Sinatra's salary demands, to play one of the husbands (he was replaced by Robert Mitchum). For MacLaine, it was a joy, working with two ex-lovers (Mitchum and Dean Martin), dancing with Kelly, doing comedy with Dick Van Dyke, Bob Cummings, and a surprisingly deft Paul Newman, and working with legendary Marx Brothers' foil, Margaret Dumont, in her last film.

The end result, while a 'mixed bag', has memorable moments; Newman's French sequence, with a chimp and a murderous painting machine, captures the 'essence' of the material very well; the spoof of Fox multi-costume extravaganzas, with Mitchum, is dazzling (and his death is the funniest); best of all, the giant musical production number with Kelly and MacLaine is a total joy, a homage to both Kelly and Busby Berkeley. While the Van Dyke and Martin sequences lack the same sparkle, and Cumming's scenes appear more contrived than funny, the overall result is wonderful eye candy, with MacLaine never sexier, or more energetic. That the film failed to become a big hit when released was certainly not due to it's star.

The new DVD edition deserves a commentary and 'making of' documentary (neither of which it has), but does offer some entertaining newsreel footage from the 1964 World's Fair premiere, as well as an amusing newsreel of the casting of the chimp for the Newman sequence.

"What a Way to Go!" may not be 'classic' cinema, but it is fun, and if you're a MacLaine fan, you'll be in for a treat!
Read more
23 people found this helpful
Helpful
Report abuse
See all reviews

Vicki Anderson
3.0 out of 5 stars Of it's time.
Reviewed in the United Kingdom on November 3, 2019
Verified Purchase
A film of it's time, a bit silly and not very p.c. but not offensive. Worth watching if like 'glorious technicolor'
Read more
Report abuse

wee scottie
4.0 out of 5 stars A bit of fun
Reviewed in the United Kingdom on August 4, 2017
Verified Purchase
Just as I remembered it good clean fun lots of cameos by now legends and worth viewing just to see how good Shirley McLaine looks in the most outrageous outfits. A good popcorn tongue in cheek.
Read more
Report abuse

Page 1 of 1 Start overPage 1 of 1
Previous page
Next page
Pages with related products. See and discover other items: robert mitchum movies
Back to top
Get to Know Us
Make Money with Us
Amazon Payment Products
Let Us Help You
EnglishChoose a language for shopping. United StatesChoose a country/region for shopping.
© 1996-2021, Amazon.com, Inc. or its affiliates