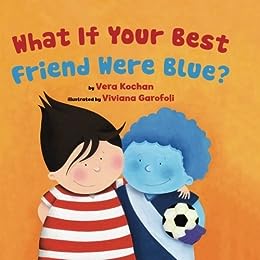 What If Your Best Friend Were Blue? Kindle Edition

We live in a world of infinite variety: people of all colors, creeds, political affiliations, ethnic backgrounds, and educational experiences. A smart and sensitive little boy imagines that all the people around him are a different color. Would that change things in any significant way?

Writer Vera Kochan and illustrator Viviana Garofoli have put together a simple but elegant children's book affirming the special qualities and talents of individuals and a celebration of the diversity of humankind. Children from 4 years and up will enjoy and appreciate this book. --Frederic and Mary Ann Brussat

Ages 4-7 A boy wonders what the world would be like if people were different colors. His best friend might be blue, but he would still play soccer. If the boy were lost, a green policewoman would help him find his parents. A yellow doctor, a purple fireman, and a red teacher would continue to do their jobs despite their color. His orange babysitter would be just as much fun as ever. He concludes that these people don t care what color you are, either....They like you just because you re YOU! Full-color acrylic illustrations are done in a cartoon style, and the simple text makes the lesson on tolerance accessible to youngsters. This book could be used as an introduction to Emily Jenkins s The Little Bit Scary People (Hyperion, 2008), which would deepen a discussion of tolerance and identity. --Mary Jean Smith, Southside Elementary School, Lebanon, TN, School Library Journal --This text refers to the hardcover edition.

4.1 out of 5 stars
4.1 out of 5
51 global ratings
How are ratings calculated?
To calculate the overall star rating and percentage breakdown by star, we don’t use a simple average. Instead, our system considers things like how recent a review is and if the reviewer bought the item on Amazon. It also analyzes reviews to verify trustworthiness.
Top reviews

Kindle Customer
4.0 out of 5 stars Not well formatted - FIXED
Reviewed in the United States on October 18, 2012
Verified Purchase
This is a nice book, albeit very short. I mean nice probably in the printed form, because in Kindle it is a disaster. There was no attention to the move to the kindle format, so the illustrations and the text just fall randomly wherever they want. Not nice when you are reading to a five year book.
This would be very easy to fix: just a big illustration for each page, with the eventual text below. Obvious, isn't it ?

When we compare this poorly executed disaster with the beautiful iBook works available for children, it doesn't stand a chance.

After this review, a representative from the publisher called me to say the book had been fixed. It was good customer service. She didn't ask for an update in the review, but I think the book deserves more stars, because it now works fine.

Connie D
4.0 out of 5 stars Great opportunity to discuss differences with preschoolers.
Reviewed in the United States on February 10, 2015
Verified Purchase
I use this book in my preschool to discuss differences. My kiddos enjoy it. At first, they think it's silly because the people in the book are primary colors. It then leads to a very good discussion about equality and differences. This book is a helpful tool to teach preschoolers that it's what's on the inside that counts.
Read more
Helpful
Report abuse

F. C. Louderback
5.0 out of 5 stars Worked For Me
Reviewed in the United States on January 12, 2014
Verified Purchase
My father-in-law was the most biggeted jerk I know. But he does have a big heart, and I did not know how to tell him about his single, solitary flaw. Then I saw this, bought it , and then sent it to his tablet. When I asked him if "he had read anything new, lately?" He belly laughed, and said "yes, and I am working on it, Mr. Blue". First time we ever hugged....I highly recommend this read for kids and adults.
Read more
One person found this helpful
Helpful
Report abuse

R. Guzman
5.0 out of 5 stars good book good message.
Reviewed in the United States on November 3, 2014
Verified Purchase
me and the kids really enjoyed the story. My youngest loves "reading" along. Basic message is the color of a persons skin should not matter.
Read more
Helpful
Report abuse

S.
5.0 out of 5 stars nice message
Reviewed in the United States on February 22, 2015
Verified Purchase
Read it to my 5yr old granddaughter, she got/knew the message and liked it, cute story.
Read more
Helpful
Report abuse

Kristen LW
3.0 out of 5 stars Opens a talk about differences
Reviewed in the United States on January 19, 2013
Verified Purchase
If you are ready for a talk with children about differences this would be a good way to start. This would likely be for very young children.
Read more
Helpful
Report abuse

RBI
3.0 out of 5 stars 3 Stars
Reviewed in the United States on August 14, 2013
Verified Purchase
My four year old likes the book, the message is good, I feel like it could be done better. 3 stars.
Read more
Helpful
Report abuse

onlyme
5.0 out of 5 stars The kids love it
Reviewed in the United States on January 9, 2015
Verified Purchase
great book for little kids
Read more
Helpful
Report abuse
See all reviews

Redneck Army Wife
5.0 out of 5 stars Adorable
Reviewed in Canada on January 4, 2013
Verified Purchase
This was an adorable story with colorful illustrations. A good book for beginner readers. Bought for my grade one son.
Read more
Report abuse
See all reviews
Back to top
Get to Know Us
Make Money with Us
Amazon Payment Products
Let Us Help You
EnglishChoose a language for shopping. United StatesChoose a country/region for shopping.
© 1996-2021, Amazon.com, Inc. or its affiliates