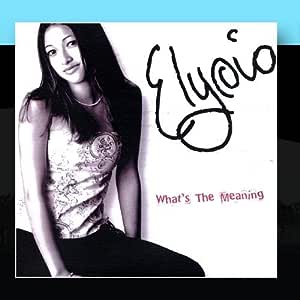 Add to Cart
$15.99
& FREE Shipping on eligible orders. Details
Sold by: Amazon.com
Have one to sell?
Sell on Amazon

What's The Meaning by Elysia

Hailing from Ohio, 17 1/2 year old singer/songwriter Elysia has been singing since the age of five. Originally born in Canada, Elysia is currently a senior in high school. After attending the International Model Talent Association in Los Angeles in January 2002, Elysia decided to pursue a career in singing. She started singing other artists songs and showcased at the Mid-Western Music and Film Conference in Lexington, KY (August 2002) and in New York (March 2003) as the lead singer of the teen group "Poppys". Her latest showcase was on January 30th, 2004 at the Music Law Conference in Gainesville, FL (University of Florida). Elysias songwriting career started in July 2002 as she worked with a local gold and platinum selling producer, Mike Seifert. Elysia completed her four-song CD demo in August 2003 and she completed her 1st 10-song CD with Grammy nominee producer Simon Illa (signed with Warner Chappell), Simon Illa Music, Inc. from Philadelphia on December 200! 3. Elysia was the lead vocalist with the "Poppys" for 3 months (formerly known as the "Greenhouse 27"). The songwriter for the "Greenhouse 27", Jack Dean was signed to a publishing deal with Warner Chappell. Elysia is currently the lead singer, songwriter, and pianist for the new band "Elysia". "Elysia" was a 6-piece band. The group is now a smaller band composed of Elysia (lead vocalist, songwriter, and pianist) and the lead guitarist Jimmy Weaver (music composer) (17). Her music is licensed to MTV "The Real World", 2004. She is performing weekly at the Traffic, Tower City Mall, Galleria mall, Around the Corner, and Clifton Arts and Musicfest in Cleveland Ohio.Elysia has other performing experience in acting (starring in "The Nutcracker" and "Oliver"), modeling (through Stone Agency and Talent Group), dancing, and piano. Elysia sang with the "Singing Angels of Cleveland" for two years from 1999-2000! and has received five years of vocal training and 1 year choreography. Elysia is a great stage performer and has amazing command of the stage. She will be a star.