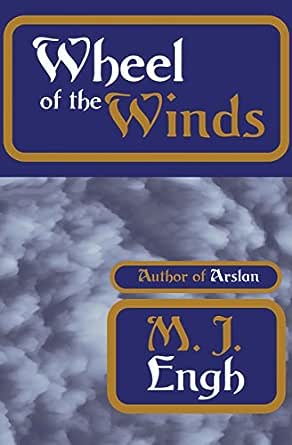 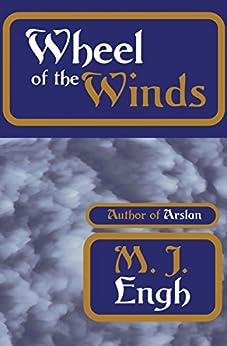 Wheel of the Winds Kindle Edition

This unusual, enjoyable second novel by Engh ( Arslan ) is a charming picaresque adventure set on another planet. To this unnamed planet comes the odd-looking man known as the Exile. The Warden, Lethgro, has captured the Exile after his escape from Sollet Castle, and now holds him prisoner on the small sailing ship Mouse. But when an inspector of the Council of Beng is about to board the Mouse , Captain Repnomar, seeing that her friend the Warden does not wish to surrender the Exile to the Council, cuts and runs. And so begins for Lethgro, Repnomar and the Exile (who we have begun to suspect is an Earthman) an around-the-world journey over sea and land, through strange places previously unseen by civilized eye. Engh tells the story in a 19th century prose style: ("For, as he said, they did not know when they would come to water again; and Repnomar thought this so prudent that she filled the little bailer that dangled always at her belt."). This device is appropriate to the level of civilization on this planet, which resembles life here a century ago.
Copyright 1988 Reed Business Information, Inc. --This text refers to an alternate kindle_edition edition.

Mary Jane Engh is the author of Arslan, The House in the Snow, Wheel of the Winds, A Wind From Bukhara, and Rainbow Man, as well as numerous short stories.
--This text refers to an alternate kindle_edition edition.

CissaTop Contributor: Baking
TOP 1000 REVIEWER
3.0 out of 5 stars Review of "Wheel of the Winfds", not Hegel studies
Reviewed in the United States on April 22, 2014
Verified Purchase
Apparently there is some confusion between the novel I just read and a book on Hegel. I am reviewing the novel, "The Wheel of the Winds", by M.J. Engh.

This is a pretty good read in the Boys' Own Adventure school of novel (although there are important women in it as well). It's pretty much 100% adventure plot. There's a bit of mystery surrounding the Exile... but not much for anyone who knew they were reading sf.

The world is pretty interesting. It's a cloud-covered world like Venus, and one in which one hemisphere is always facing the sun, and the other always dark. I'm not sure if the science behind it is plausible; I'd think that the hot side would be much hotter, and the cold side much colder- but there is an atmosphere, so it's plausible enough if one doesn't think about it too hard.

The motivations of the Exile and his people also seem a bit weak. They're going around to other planets, at great expense, to... collect weather data? Why?

While the characterization is pretty consistent, it's also pretty one-note. There's no bothering with that pesky growth stuff! But then, who'd have time when the plot is so eventful?

So- in my opinion it's OK, and probably more fun for people who like adventure tales. For myself, I prefer more thoughtfulness, like character intricacy and growth, a well-thought-out world that is more grounded in the science, etc. This could have been such a novel... but it's not.

hernalt
3.0 out of 5 stars Apparently unknown or underappreciated
Reviewed in the United States on June 16, 2007
I read this book during high school between various and sundry works of Clarke, Azimov, Heinlein, Orson Scott Card, Greg Bear, and journal articles on astronomy, cosmology, particle physics. The official reviews on the paperback version could be modified. They argue that the writing style reasonably matches the linguistic field of the subject culture, true, which they say resembles ours a century ago, no. It is more pre-discovery, even pre-Christianity when the Pillars of Hercules had not yet become a main thoroughfare. The books' cultures have rowing galleys, boats with ramming prows, and javalins. Perhaps it is even like Classical or Hellenic Greece, with female Captains and crew thrown in. The language is frequently very simple and metaphoric as would be found in many primitive cultures, elements of wonder not missing from Odyssey and Illiad. What might be most accessible is the aspects of survival, exploration and discovery, with sufficiently developed eyeball-kicks both in the character of a documentary Louis and Clarke and a fantastical metaphor like the Argonauts' Sympleglades or Odysseus' Scylla and Charybdis. The characters are not overly belabored with shining-button physical detail like in Robert Jordan, nor do the subject characters (Captain and Warden) have a great deal of philosophical Hydras to deal with. The Exile's story bears the weight of the philosophy, but the reader would have to be attentive. What is more, this book has not been fatally infected with that bubonic plague of post-Tolkienian/LeGuinian counterfeit, a map. The story is geographical and topological, and uncharted: the sense of wonder is dynamically retained, as well as the sensation of nostos(home)-algia(pain) and home-coming, like any good Odyssean text. A reader probably needs a foundation in basic planetary science and climatology. One weakness, from a hard science fiction standpoint, is that the author does not jive the apparently shorter distance of circumpherence, indicating a smaller planet, with its apparently comparable Earth gravity. Is this planet denser? Cored of lead? Such questions are far out of the scope of the story, but could have been useful.
Read more
2 people found this helpful
Helpful
Comment Report abuse

Klem
5.0 out of 5 stars Delightful and Thought Provoking
Reviewed in the United States on September 23, 2008
I read M.J. Engh's "Wheel of the Winds" when it first came out, and I just reread it several weeks ago. Let me tell you, I don't waste my time rereading "stinkers." I found it even better the second time around.

Both the prose style and the story are delightful. Picture "Around the World in Eighty Days" set on a planet that does not rotate; hence the different peoples and creatures that inhabit it have all evolved and adapted to their environments in unique and fascinating ways. The world through which the Captain, the Warden, and the Exile journey is familiar enough to be imagined vividly by the reader, but different enough to be thought provoking. The Exile's origins are intriguing, and the Captain is an admirably strong female lead character. Her culture is one where gender equality is the norm (imagine!), where men and women can be good friends without being lovers, and where animals - especially a wonderful dog named Broz - play vital and respected roles.

I like this book so much I bought my son (a History and English teacher) a copy, and he loved it, too!
Read more
5 people found this helpful
Helpful
Comment Report abuse

not4prophet
1.0 out of 5 stars Stinker
Reviewed in the United States on May 27, 2004
"Wheel of the Winds" follows three characters, known as "The Captain", "The Warden", and "The Exile" as they flee from somebody and take a journey around the world. They see a lot of landscapes and havea couple encounters with poorly described little furry creatures. And that's about it. Yes, the central problem with this book is that it lacks purpose. Although billed as a story about self-discovery, none of the main characters really catch your attention. As far as imagination goes, this book is seriously lacking. It's just too long and boring to justify reading it, despite one decent action sequence.
I might say that Engh's dialogue is wooden, but I don't want to insult wood. The writing is just awful most of the time, with the characters simply pouring forththeir emotions and thought processes. It doesn't ever sound the slightest bit like real dialogue. Avoid this one, folks, cause there's nothing to see here.
Read more
3 people found this helpful
Helpful
Comment Report abuse
See all reviews from the United States