When the Axe Falls (The Omega War Book 7) and millions of other books are available for Amazon Kindle. Learn more 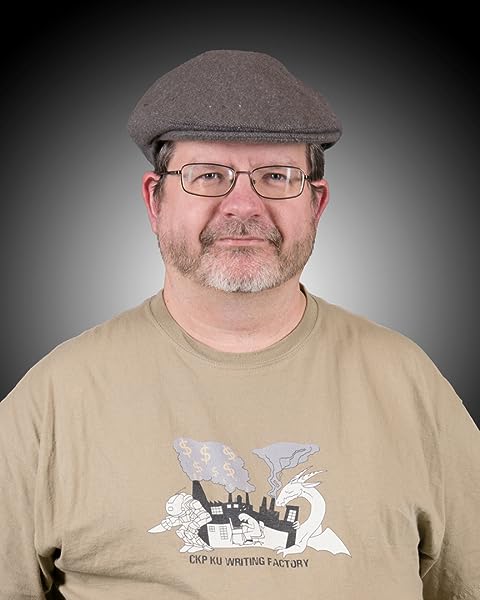 by Jon R. Osborne (Author)
4.8 out of 5 stars 132 ratings
Book 7 of 12: The Omega War
See all formats and editions
Sorry, there was a problem loading this page. Try again.
Read more Read less
Previous page
Next page

If I was collecting books in PRINT form, this one would go on TOP of my bookcase, where I keep only my Heinlein, Pournelle and Niven, David Drake & Eric Flint. Buy this one today.
-Pat Patterson

This piece of the 4HU tales is another example of how wonderfully this universe has been crafted. Even though I've only been introduced to many of the Berserkers tangentially in other stories there are no obvious or even subtle contradictions of character in this telling only a deeper level of understanding. Even if you've never read any other 4HU tale, this book will make you a believer. It stands alone nicely as a great space opera but fits even better into the complex dimensions of the 4HU. This is the best 4HU tale to date and so well worth the read. I look forward to the next piece with great anticipation.
-Amazon reviewer

"Finish a short story - you can do that."

Bjorn's Berserkers was born from a scene - a mercenary commander in a bar. A big, burly, badass merc that looked part Viking and part biker. A hardcore mercenary with a soft spot for a waitress.

Once I had the image of Bjorn Tovesson III, the back story filled in itself. Why does he have a cybernetic arm? Why is he so grumpy? Why are the Berserkers here?

"Surf and Turf", and the follow up,"Angels and Aliens," scratched the surface, but I knew there was a bigger story to tell. When I pitched the story for "When The Axe Falls," I was told two things--it would fit in the current Omega War series, and because of that, I needed to finish it sooner rather than later. Challenge accepted.

I hope you enjoy When The Axe Falls, because I don't intend for it to be my last book in the 4HU. Valhalla Awaits!

Jon R. Osborne has been forging stories through gaming since he was thirteen. He studied journalism in high school and majored in journalism at Franklin College. Many years later, he finally combined writing and story-telling with his first published work, a short story in the military science fiction Four Horsemen Universe.

Jon's first book series is urban fantasy trilogy The Milesian Accords. The second book, A Tempered Warrior, was a 2018 Dragon Awards finalist for Best Fantasy Novel. He has written three short stories in the Four Horsemen Universe, and one novel, When The Axe Falls.

Jon lives in Indianapolis, where he continues to play role-playing games, and writes less often than he should. You can find out more at jonrosborne.com. Fans who sign up for his mailing list will receive "Chapter 0" for A Reluctant Druid and be the first to here news about Jon's newest books and stories.
Read more
Start reading When the Axe Falls (The Omega War Book 7) on your Kindle in under a minute.

4.8 out of 5 stars
4.8 out of 5
132 global ratings
How are ratings calculated?
To calculate the overall star rating and percentage breakdown by star, we don’t use a simple average. Instead, our system considers things like how recent a review is and if the reviewer bought the item on Amazon. It also analyzes reviews to verify trustworthiness.

Alexis Borquez Lucas
5.0 out of 5 stars Good story, sound writing and a really good Merc company!
Reviewed in the United States on December 8, 2018
Verified Purchase
Hi, just starting to read (5%) but I feel compelled to post a review all ready, I will edit the 3 stars as the story develops.

Why 3 stars? Because I speak snapinsh as my native language, and found really annoying the misspelling in Spanish words.

Edit: Finished reading, edited from 3 to 5 stars, plot and writing 5 stars, no questions there, and when I make a post on the 4HU Facebook group, Chris Kennedy and Jon Osborne where really nice and asked for feedback so they can fix the misspellings on the Spanish words... Simply AWESOME!

Please, read the books, all of them, this one in particular highlights a Merc company outside the horsemen, but I didn't miss them... Recommended!
Read more
2 people found this helpful
Helpful
Report abuse

Shawn
5.0 out of 5 stars Fantastic 4HU book.
Reviewed in the United States on December 7, 2018
Verified Purchase
I really enjoyed the short stories that were written by Jon for the 4HU (The Good, the Bad, and the Merc, a Fist Full of Credits and Luck is not a factor). This book builds on those stories, and is an easy enjoyable read.

Jon Osborne tells a complex and in-depth story starting the part of the back story, building on the short stories and setting up for future stores dealing with the Berserkers. I really enjoyed reading this book.
Read more
3 people found this helpful
Helpful
Report abuse

Jonathan Minion Bolder
5.0 out of 5 stars Need a sleepless night, have a day you want to skip, reading this book will help you do either!
Reviewed in the United States on December 7, 2018
Verified Purchase
What an awesome read. The vivid and realistic characters were a part of a well written story. Each perspective was well done, fit into the whole well and increased my enjoyment. Not only is this a worthy entry in the four horseman universe, but it stands solidly on its own. I recomend the entire series, but like legend, this one stands out.
Read more
6 people found this helpful
Helpful
Report abuse

Doug Triplett
5.0 out of 5 stars Valhalla awaits!
Reviewed in the United States on December 7, 2018
Verified Purchase
When the Axe Falls is awesome. Jon's best book yet. The action is right and steady. There are several plots that come together. I can't wait til the next story featuring the Beserkers. Jon sets things up and moves the j iersal story along. Plugging in some needed elements. If you have been following you will love what he does.
Read more
4 people found this helpful
Helpful
Report abuse

Christopher W
5.0 out of 5 stars The price is steep, when it falls
Reviewed in the United States on June 16, 2019
Verified Purchase
Valhalla awaits ! Book 7 in The Omega War timeline, starts off in an unexpected place. Framed for a murder that they didn't commit, revenge fuels a family hellbent on payback. Add in a planetary invasion, a couple of evacuations, some military deployments, some dating and relationship stories, interested third party observers, spies, moles, and unexpected events.... you've got a page turner that you want to finish as soon as possible. Don't just take my word for it though, read it for yourself.
Read more
Helpful
Report abuse

Matthew Boersman
5.0 out of 5 stars Very Good Story
Reviewed in the United States on February 18, 2019
Verified Purchase
I really enjoyed this 4 Horseman Tale about Bjorn's Berzerkers. Everything blended together well and meshed the battles on several different worlds in a way that made sense. Having the personal revenge in addition to the contracts for the Mercs really added to the story. Good job on the writing of this tale.
Read more
Helpful
Report abuse

Nick
5.0 out of 5 stars One of the best in this universe so far
Reviewed in the United States on April 17, 2020
Verified Purchase
If you're this far into the horsemen universe you're probably like me, not bothering to review or read the reviews because you plan to read them all anyway. I had to put this here to say that this book was one of my favorite so far.
Read more
One person found this helpful
Helpful
Report abuse
See all reviews

Kindle Customer
5.0 out of 5 stars Great story
Reviewed in the United Kingdom on December 5, 2018
Verified Purchase
Another great addition to the four horseman universe well written great characters and loved the action scenes it adds another chapter to the omega war and helps to see how it is unfolding from different views great read
Read more
One person found this helpful
Report abuse

Scott Osmond
5.0 out of 5 stars Modern Vikings In Space
Reviewed in Australia on December 16, 2018
Verified Purchase
What I like about the Omega War series is that we get a look at other mercenary outfits than the 4 horsemen. The Berserkers were a interesting outfit. They had all the trappings but also used smarts to win. Good characters, using new recruits enabled the author to show not tell us about the Berserkers. A rat in the ranks gave an element of mystery and I didn't guess the perp. Lots of action and a look at what the resistance is preparing back on Earth. I'll be getting the next entry.
Read more
Report abuse

Shawn Tyrie
5.0 out of 5 stars What a Ride
Reviewed in Australia on December 18, 2018
Verified Purchase
Loved this all the way through when the Axe does fall..
Great story and sets up the next chapter in the 4HU
Read more
Report abuse
See all reviews
Back to top
Get to Know Us
Make Money with Us
Amazon Payment Products
Let Us Help You
EnglishChoose a language for shopping. United StatesChoose a country/region for shopping.
© 1996-2021, Amazon.com, Inc. or its affiliates