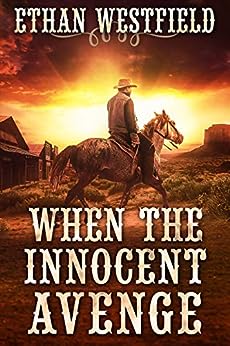 by Ethan Westfield (Author) Format: Kindle Edition
See all formats and editions
Sorry, there was a problem loading this page. Try again.

Duncan Hale leads a hazardous life, riding with The Nevada Nine, a merciless gang of robbers. When they partake in a nasty crime, he refuses to participate, a decision that will almost cost him his life. Under the frightful rein of the gang’s leader who orders his murder, Duncan will be tortured and left for dead. Luckily for him, a fearless man named Gus will come to his rescue. Together they will join forces on a risky mission of revenge, determined to deal with the endless challenges they encounter. As their pursuit takes them on many adventures, what are they willing to risk in order to put every last one of the gang members behind bars?

While Duncan and Gus are planning their payback, a beautiful woman, Yvonne Mahler, gets captured by the gang, and the two men vow to free her no matter what. However, Duncan quickly realizes that there is more to the feisty redhead than it appears, as she tricks the leader with her brilliant intellect. In an unexpected turn of events, she and Duncan finally meet and he can’t help but wonder whether they can partner up against the evil criminals. With her intentions finally revealed, will they manage to combine their excellent skills victoriously in a game of cat and mouse where anybody could come out as a winner?

Even though Duncan and Yvonne meet under the worst variety of circumstances, their lifetime adventure brings them closer together. However, as long as the gang continues to spread chaos, their love cannot flourish. Will they accomplish their goal and ultimately take the revenge they've been seeking? Or will they be both doomed to a dreadful fate?

An action-packed story, featuring complex and fascinating characters, and twists and turns that will take your breath away. A must-read for fans of Western action and romance.

"When the Innocent Avenge" is a historical adventure novel of approximately 60,000 words. No cliffhangers, only pure unadulterated action.

The book has resonated with readers! Here's some excerpts from their reviews:

"This is a Western book written by Ethan. It is a really good read. The book is creatively written, its embroidered together delightfully. The storyline is engaging and the characters are wonderful described, with the flaws and imperfections. The scenery descriptions are razor edge sharp, and help bring the book to life. This book is a wonderful read. I believe it is a winner." - J., Amazon review ⭐⭐⭐⭐⭐

"An amazing, action packed story of three folks who team up against a vicious gang. Just when they settle down, thinking that their journey is over, boom! The ruthless gang leader is back, Hell bent on exacting revenge. A real nail biter from start to finish" - S.F., Amazon review ⭐⭐⭐⭐⭐

"Great edge of your seat story about a gang that turns on one of their own. The leave him for but is found by another man and nursed back to health. They go after the gang that has kidnapped a woman. Many twists and turns. Characters are awesome and this is a real nail biter." - K.C.L., Amazon review ⭐⭐⭐⭐⭐

"I think so far out of Ethan Westfield's books, this one scared me the most. The usual elements that make his books stand out were definitely reflected here since there were a lot of bloody and dangerous situations here, not to mention the non-stop action. [...] I admired the writing style because there were times when the writing would try to lead you to think one conclusion but as you read, there is a totally opposite one instead." - N.K.P., Amazon review ⭐⭐⭐⭐⭐

N.K. Padua
5.0 out of 5 stars I got scared with this one
Reviewed in the United States on November 8, 2020
Verified Purchase
I think so far out of Ethan Westfield’s books, this one scared me the most. The usual elements that make his books stand out were definitely reflected here since there were a lot of bloody and dangerous situations here, not to mention the non-stop action. But the fact that the antagonist on this book is the most unstable, creepy, and the closest to the perfect epitome of evil I’ve probably ever read from his books, this books sent chills down my spine. Not only that but the danger of being female was cringeworthy but an absolute correct reflection of the time period and setting. I admired the writing style because there were times when the writing would try to lead you to think one conclusion but as you read, there is a totally opposite one instead.
Read more
Helpful
Report abuse

Jude 💜s books.
5.0 out of 5 stars When the innocent avenge.
Reviewed in the United States on November 2, 2020
Verified Purchase
This is a Western book written by Ethan.
It is a really good read.

The book is creatively written, its embroidered together delightfully.
The storyline is engaging and the characters are wonderful  described, with the flaws and imperfections.
The scenery descriptions are razor edge sharp, and help bring the book to life.
This book is a wonderful read.
I believe it is a winner.

apple4theteacher
3.0 out of 5 stars An unexpected hero
Reviewed in the United States on April 8, 2022
Verified Purchase
Interesting collection of characters for the main heroes. Banjo the bear especially, saves the day on more than one occasion. Gus, the old hermit falls to death at the last showdown with villian while trying to help rescue damsel from plateau top...only to do a cameo appearance dancing with his middle aged love (saloon girl Ginny) at the happy couple's wedding.
Read more
Helpful
Report abuse

Mary
4.0 out of 5 stars Interesting and a bit strange
Reviewed in the United States on December 18, 2020
Verified Purchase
The story was interesting. Duncan, a man riding with an outlaw gang, displeased the leader and was beaten and left for dead. Yvonne was after her brother's murderer. When Duncan, with the help of the old man and his pet bear, sets out to stop the outlaws who tried to kill him he crosses paths with Yvonne. Duncan, Yvonne and Gus set out together to stop the gang of outlaws. They encounter some strange happenings along the way. It is a good story, worth reading.
Read more
Helpful
Report abuse

Kindle Customer
1.0 out of 5 stars Boring
Reviewed in the United States on November 6, 2020
Verified Purchase
Not enough action. Too much, she thought, he thought, too much philosophising, and thoughts of a bear ? Who the heck cares?. Boring. Do not recommend.
Read more
Helpful
Report abuse

Kindle Customer
4.0 out of 5 stars Rating
Reviewed in the United States on November 21, 2020
Verified Purchase
Ethan westfield is a very good writer. Deep stories. have to pay close attention to keep up an into the story
Read more
Helpful
Report abuse

karen wilder
5.0 out of 5 stars Held my attention
Reviewed in the United States on November 6, 2020
Verified Purchase
What a good book. Enjoyed the story line. Something a little different.
Read more
Helpful
Report abuse

William H. Turner
5.0 out of 5 stars That you are a very good writer
Reviewed in the United States on November 6, 2020
Verified Purchase
I have finished the book yet. I find the story with a different twist and story line. Bring in the bear was a very clever touch.
Read more
Helpful
Report abuse
See all reviews

Tornado 1
5.0 out of 5 stars A good read
Reviewed in the United Kingdom on November 8, 2020
Verified Purchase
I liked the characters and the unusual alliance between Gus and Banjo. Yvonne was superwoman and I felt inferior haha
Lots of action when a bad guy reforms anything is possible
Read more
Report abuse

Amazon Customer
5.0 out of 5 stars Wow simply wow.
Reviewed in the United Kingdom on January 5, 2021
Verified Purchase
Ethan you're a wonderful writer I love your book, I laughed and cried I read this in 2 days I. Opulent out of down thank you Ethan
Read more
Report abuse