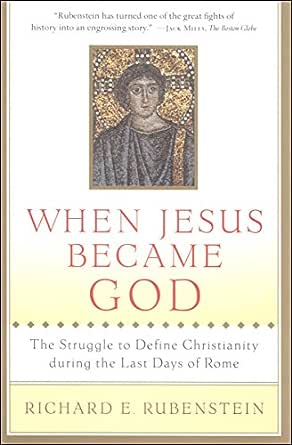 When Jesus Became God: The Struggle to Define Christianity during the Last Days of Rome First Edition, Kindle Edition

Flip to back Flip to front
Audible Sample Playing... Paused   You are listening to a sample of the Audible narration for this Kindle book.
Learn more
ISBN-13: 978-0156013154
ISBN-10: 0156013150
Why is ISBN important?
ISBN
This bar-code number lets you verify that you're getting exactly the right version or edition of a book. The 13-digit and 10-digit formats both work.

"[Rubenstein] has taken one of the major religious controversies of the early Christian church, a controversy that consumed its energies for most of the fourth century, and turned it into a flesh-and-blood encounter of real people that reads like an adventure story."-The Christian Science Monitor
"A splendidly dramatic story . . . Rubenstein has turned one of the great fights of history into an engrossing story."-Jack Miles, The Boston Globe; author of God: A Biography

The Gospel narratives may suggest that Jesus was divine, but they do not insist upon it. Hundreds of years after Jesus' death, the Church councils made Jesus' divinity a central tenet of belief among many of his followers. When Jesus Became God: The Epic Fight over Christ's Divinity in the Last Days of Rome by Richard Rubenstein is a narrative history of Christians' early efforts to define Christianity by convening councils and writing creeds. Rubenstein is most interested in the battle between Arius, Presbyter of Alexandria, and Athanasius, Bishop of Alexandria. Arius said that Christ did not share God's nature but was the first creature God created. Athanasius said that Christ was fully God. At the Council of Nicea in 325, the Church Fathers came down on Athanasius's side and made Arius's belief a heresy.

Rubenstein's brisk, incisive prose brings the councils' 4th-century Roman setting fully alive, with riots, civil strife, and spectacular public debates. Rubenstein is also personally invested in the meaning of these councils for religious life today: he wrote this book, in part, because he grew up in a mixed Jewish Catholic neighborhood and was bewildered by animosity between the religious groups on his block. Digging back in history, Rubenstein learns that before the Arian controversy, "Jews and Christians could talk to each other and argue among themselves about crucial issues like the divinity of Jesus.... They disagreed strongly about many things, but there was still a closeness between them." But when the controversy was settled, Rubenstein notes, "that closeness faded. To Christians, God became a Trinity and heresy became a crime. Judaism became a form of infidelity. And Jews living in Christian countries learned not to think very much about Jesus and his message." --Michael Joseph Gross --This text refers to an alternate kindle_edition edition.

The Gospel stories of Jesus' life, death and resurrection are familiar tales in Western literature. Yet, the Gospel narratives do not themselves pose or answer the theological question of Jesus' divinity. None of the disciples become engaged in disputations about whether Jesus is fully God or fully human. It took almost 300 years for these questions to be raised in such a serious way that Christianity was changed forever. Rubenstein, a Jew who proclaimed in a now famous book (After Auschwitz, Johns Hopkins University Press, 1992) that God died "after Auschwitz," examines the details of the fractious period in early Christian history when Christianity was defining itself against other religious sects through a number of councils and creeds. Although he focuses on several of the controversies surrounding the divinity of Jesus, Rubenstein zeroes in on the fiery battle between Arius, a presbyter of Alexandria, and Athanasius, who was Bishop of Alexandria. Arius contended that Christ did not share God's nature but was simply the first creature created by God the Father. Athanasius, on the other hand, argued that Christ was fully God, asserting that the incarnation of God in Jesus restored the image of God to fallen humanity. With a storyteller's verve, Rubenstein brings to life the times and deeds of these two leaders as well as the way that the Council of Nicea in A.D. 325 established the Christian orthodoxy that was later used to judge and exile Arius as a heretic. As a result of Nicea, the author says, "To Christians God became a Trinity. Heresy became a crime. Judaism became a form of infidelity." Rubenstein's lively historical drama offers a panoramic view of early Christianity as it developed against the backdrop of the Roman Empire of the fourth century. (Aug.)
Copyright 1999 Reed Business Information, Inc. --This text refers to an alternate kindle_edition edition.

Few 20th-century Christians know of the intense religious, social, and political struggle surrounding the Arian Controversy, which spanned 60 years of the 4th century. But Rubenstein, a scholar specializing in the analysis of violent religious and social conflict, explains that the elements of this theological struggle reflected a monumental historical shift: Christianity, once a persecuted sect, became the Roman Empire's official religion, and the Church councils decided once and for all that Jesus was fully divine--to believe otherwise became heresy. The Arians believed that Jesus was "the holiest person who ever lived, but not the Eternal God," explains Rubenstein. On the other side were followers of Athanasius, who believed that Christ was fully God. After much strife, the Church adopted the Nicene Creed, which settled the matter in favor of Athanasius and made the Arian belief heresy. The decision resonated long afterward, Rubenstein writes, leading to the break between the western and eastern Catholic church and to centuries of distrust between Christians and Jews. Before the conflict, "Jews and Christians disagreed strongly about many things, but there was still a closeness between them. They participated in the same moral culture." When it ended, "when Jesus became God--that closeness faded. To Christians, God became a trinity and heresy became a crime. Judaism became a form of infidelity."
Copyright 1999 Reed Business Information, Inc. --This text refers to an alternate kindle_edition edition.

One of the most compelling stories of Church history, insightfully told. As a Harvard Law School graduate, a professor of conflict resolution (George Mason Univ.), and a Jew, Rubenstein casts himself as an odd choice to chronicle early Christianity's crucial theological question: was Jesus human or divine? But as he demonstrates, the fourth-century controversy over the nature of Jesus had ramifications far beyond a simple christological dispute. As he puts it, ``the main doctrinal issue acted like a magnifying glass'' for all sorts of other questions: how would Christianity make the transition from persecuted sect to the established religion of Constantine's Roman Empire? Who would resolve theological disagreements and define orthodoxy? The chief players in Rubenstein's narrative are Athanasius, the scrappy, ruthlessly ambitious young priest who believed that Christ was fully human and fully divine, and his mortal enemy Arius, the popular advocate of subordinationism, the belief that Christ was subordinate to God's will. Athanasius built his power base through violence and the threat of it, hiring thugs to beat and harass clergy who opposed him. Arius was no saint either, and his theological disagreements with Athanasius and his followers quickly escalated into personal attacks. Rubenstein presents both theologians' views so persuasively that its easy to understand why Constantine was swayed by first one, then the other, as he tried to preserve harmony in the Church and the empire. The Council of Nicaea (325 a.d.) was supposed to resolve the christology once and for all, but Constantine kept changing his mind, as did his successors (Athanasius was exiled and then welcomed home no less than five times before his death in 373). By 381, advocating Arian views or possessing Arian writings had become a crime punishable by death. Nicene Christianity finally triumphed, but the doctrinal seeds had been planted for a major schism with the East seven centuries later. Perceptive, well-written Church history. -- Copyright ©1999, Kirkus Associates, LP. All rights reserved. --This text refers to an alternate kindle_edition edition.

"This book is a great theological adventure finely told. When Jesus Became God takes the contemporary conversation about Jesus of Nazareth beyond the New Testament period. Richard Rubenstein has a vivid historical and theological imagination and understands that theology is often political and works through the muddle and mess of human history."

"An exciting book! Richard Rubenstein has taken the ancient conflict in Christian history between Arius and Athanasius and has given it the brilliance of modern journalistic coverage. In the process he enlightens us about the nature and destructiveness, to say nothing of the roots, of those dark places in our contemporary history where far too often religious convictions are expressed in terms of hate, murder, ethnic cleansing and even warfare."

* The Most Reverend John Shelby Spong, Bishop of Newark and author of Why Christianity Must Change or Die --This text refers to an alternate kindle_edition edition.

RICHARD E. RUBENSTEIN is professor of conflict resolution and public affairs at George Mason University and an expert on religious conflict. A graduate of Harvard University and Harvard Law School, he was a Rhodes Scholar and studied at Oxford University. He lives in Fairfax, Virginia.
--This text refers to an alternate kindle_edition edition.
Read more