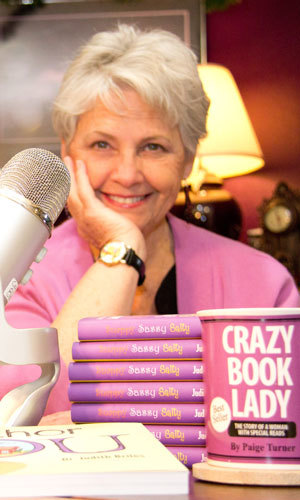 When God Says NO-Revealing the YES when Adversity and Loss Are Present Hardcover – October 1, 2019

In a deeply, introspective book, Dr. Judith Briles speaks from her own experiences (the loss of a baby and 12 years later, the loss of a teenage son) to show how she overcame her grief through faith and prayers. She says, "When God says no or not yet, the frustration or disappointments shouldn't send believers into a tailspin. This is an excellent resource for anyone who is grieving. --Book Browsing with the Pendletons

Takeaway: Readers looking for a way through dark times will be inspired by Judith Briles memoir of dogged persistence in the face of immense challenges.

Though the title suggests otherwise, Briles optimism and determination are not rooted in scripture. Nonreligious readers looking to find the positive in negative experiences will find just as many answers. The practices she uses can be applied by any reader. Although she sometimes frames life through a religious lens (such as asking, Why didnt God prevent [Franks] accident from happening? ), she focuses on the human ability to persevere. P>This is an admirable guide to finding the gifts hidden inside tragedies. --Publishers Weekly - Book Life

Judith Briles is known as The Book Shepherd and an encourager. She is a Speaker, Author and Publishing Expert, Radio Host and the Founder and Chief Visionary Officer of AuthorYOU.org.

As the author of 37 books, she has earned over 30 national book awards in the Writing, Publishing and Business fields. Briles holds both a Masters and a Doctorate Degree in Business Administration. She has worked with thousands; personally surveying over 10,000 women and men and conducting 5,000 one-on-one interviews that have been the genesis of her 37 books and speeches around the world. She has shared her insights in 50 states and 12 countries. Her books have been translated in 16 countries.

Known as The Book Shepherd to thousands, she now works with authors, coaching them with practical publishing guidance in person and remotely. Throughout the year, she delivers her Unplugged boot camps and workshops.

4.8 out of 5 stars
4.8 out of 5
30 customer ratings
How does Amazon calculate star ratings?
Amazon calculates a product’s star ratings based on a machine learned model instead of a raw data average. The model takes into account factors including the age of a rating, whether the ratings are from verified purchasers, and factors that establish reviewer trustworthiness.
Top Reviews

Barbara MojicaTop Contributor: Children's Books
TOP 1000 REVIEWER
5.0 out of 5 stars A MOST DIFFICULT JOURNEY
Reviewed in the United States on May 2, 2020
Verified Purchase
The tragic loss of her nineteen-year-old son sets in motion a dramatic life change and untold grief. As the author struggles with reality she passes through additional personal, financial, and emotional challenges.

After much time passes, the author acknowledges her receipt of four gifts. The first of these is finding a renewal of purpose, the second gift involves a renewal of spirituality that had been absent in her life. Third, she pulls up from within a “little kid spirit” and a sense of humor. Finally, the author realizes that she had developed a sense of resilience to setbacks.

I particularly enjoyed her reflection that while pain is inevitable in everyone’s life, one does not need to permit oneself to be miserable. This book is an honest reflection and memoir. While it evokes pain and sorrow, it also promises hope for the future. Just the type of positive message needed during the Covid-19 pandemic.

RoxB
5.0 out of 5 stars A Must Read For Those Who Struggle With Loss
Reviewed in the United States on May 28, 2019
Verified Purchase
When it comes to Self-Help/Relationships books this one, When GOD Says NO, tops my list. Not only is it the revealing life journey of a woman I respect and admire, but it puts clarity around questions I feel many of us ask, man or woman. She tells of her life struggles starting from her childhood, early marriage, loss of two sons decades a part, financial losses, and health issues with years of recovery. Judith shares what she has learned and how she gives back to the rest of humanity. Her mastery of words and wisdom come forward as you read through her inner most thoughts and how she found the strength that is clearly evident today. I have cried and laughed reading her honesty. I believe you will find value in this work of love.

It is difficult to itemize why I am compelled to share my thoughts about this book. Part of it is the strength that Judith earned as she faced her adversity and found so many Yeses. One comment she makes was her view on heroes which came to light during some extremely sad times.

My heroes tend to be living people. I don’t know them all personally, but I do know that there is someone I know who knows someone else. And they can make a connection if I really want it to happen. After all, having heroes, men and women whom you admire for their strength, their vision their spunk, their whatever, doesn’t necessarily mean that you must be close friends with them.

I had to pause during my reading and reflect that many people who have touched my life are heroes in their own way. I was also realize I need to get past some of my own issues by ceasing to recall times regarding those who have injured or left me hanging, then celebrate those who have made positive, meaningful impacts on me and even humanity. I have crossed paths with marvelous people who have enriched my world and some didn’t even understand the impact they had on others. I hope you find this book as insightful as I did.

Sticking by your beliefs is a fundamental part of being human. Judith’s comment regarding her conviction is one you might consider when you stand up for yourself or for something.

I did—my attitude was, and is, if a problem isn’t addressed and is swept under the rug, nothing can get resolved

There is nothing to dislike about the book other than to want to share a hug with the author. You will likely be moved by many aspects of this book and find some solace because you will be able to relate some aspect of the No's you have likely encountered in your life. Finding the good things, focusing on how to value yourself and others in this world, may alter or improve your path.

One day I plan to see the painting Judith was given as a gift by Nicole Shapiro.
Read more
One person found this helpful
Helpful
Comment Report abuse

LMTexan
5.0 out of 5 stars A message from the heart
Reviewed in the United States on May 27, 2019
Verified Purchase
Such an emotionally honest book. Thank you, Judith, for opening your heart and sharing your journey. Everyone in this world experiences tragedy. If you haven't yet, you will. That's part of life. Do yourself a favor and read this book. It will help you make sense of your own "noes" that life sends you.
Read more
3 people found this helpful
Helpful
Comment Report abuse

Just like the first time I read When God Says No, I read it straight through. It is truly a book I couldn’t put down. I count myself fortunate to spend the afternoon with Judith Briles. I felt as if she were speaking directly to me. When God Says No is a very personal book, not just because she shares the times God said no and how the noes became yesses, but because her struggles mirrored my struggles and helped me see them in a different way. Judith Briles helped me to see that if not for life-changing events I wouldn’t be in the good place I’m in today.

Warning: You’ll cry. I did, both times I read When God Says No.
Read more
Helpful
Comment Report abuse

Mimi
5.0 out of 5 stars This is a book about resilience.
Reviewed in the United States on April 8, 2020
Verified Purchase
When unwelcome circumstances happen - and they do - it's difficult to keep on keeping on. But that's just what Judith Briles does in a number of life events.

Yes, embrace grieving, anger and reflection. But she has illustrated that you can go on, and in fact, you should. She moves forward to find or create the proverbial silver lining.

Storms, viruses, isolation, death, closed doors, and other interruptions happen. It doesn't have to be the end, but a new beginning. Judith has proven that over and over.

Whether you read the book or listen to the audio, you'll be glad you embraced her journey.
Read more
Helpful
Comment Report abuse

MP denver
5.0 out of 5 stars Resilient, Resilient and More Resilient!
Reviewed in the United States on March 29, 2020
Verified Purchase
I couldn't get the word "resilient" out of my mind when reading this book. In spite of all that life has thrown at this author, she just keeps bouncing back with a positive attitude and resilient spirit. This is an incredible read!!!
Great job, Judith Briles!
MP Denver
Read more
One person found this helpful
Helpful
Comment Report abuse

Laurie Weiss, author
5.0 out of 5 stars Moving Memoir of Growth in Response to Adversity
Reviewed in the United States on May 23, 2019
I didn't want to stop reading this book. It drew me in immediately with short descriptions of important events that created a mosaic of one of the many incredibly painful challenges in the life of the author. I was awed by how her responses to each of these challenges opened windows to my understanding of her development as a mature, loving and committed woman. I highly recommend the book to anyone who struggles with accepting and responding to the unfairness of loss in their own life. It is both illuminating and life-affirming.
Read more
4 people found this helpful
Helpful
Comment Report abuse
See all reviews from the United States