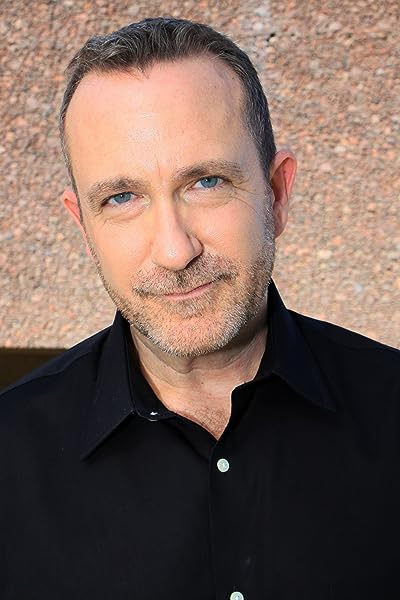 Eric Borgerson has been a writer in one form or another since junior high school in Oakland, California. He completed degrees in philosophy at Reed College and law at U.C. Berkeley. His career has included work in labor and civil rights law and politics, as an organizer, attorney, writer and journalist. He is also a fan of good science fiction, an avid science enthusiast, loves backpacking, music, film, and literature, and is a lifelong student of philosophy and spiritual traditions. When the Eye Sees Itself is Eric's first major work of fiction. While it is neither biographical nor autobiographical, it is informed and animated by Eric's extensive experience with politics and the law, as activist, participant and exile. Eric lives in the Palm Springs, California area.
Start reading When the Eye Sees Itself on your Kindle in under a minute.

4.7 out of 5 stars
4.7 out of 5
13 customer ratings
How does Amazon calculate star ratings?
Amazon calculates a product’s star ratings based on a machine learned model instead of a raw data average. The model takes into account factors including the age of a rating, whether the ratings are from verified purchasers, and factors that establish reviewer trustworthiness.
Top Reviews

Joy Nwosu Lo-Bamijoko
VINE VOICE
4.0 out of 5 stars A complex Read
Reviewed in the United States on June 15, 2019
Verified Purchase
This was a tough read, indeed! Where do I begin? A politically intense story that rang very true. I could see what is happening in the real world today reflected in that story. A political situation where an International Intelligence Director, Trent Hobson, a subordinate to Belinda Mosgrove, the chief executive of the country, seizes power through dubious means to rule a country which he already controls. Sorry about the long sentence. This book was full of them. It has a one page, but mostly a one paragraph long sentences throughout the book. I sometimes had to read and re-read to understand what was being said.

The story, in simple terms, there was nothing simple about this story, was about how the Director of Intelligence planted listening and controlling bugs all over the city. They used these bugs to listen not only to what is being said but to control people’s emotions. An insider, Agent Anaku, who disagreed with this control thing, became to only voice of truth and reason by disclosing what was happening. He had to go into hiding. In fact, no one knows whether he is alive or dead. Anyone who tried to crack into this very secretive and complex system was discovered and eliminated.

In part 1 and 2 of the story, I was completely lost. A lot of head hopping! The unconventional language of the story was not of our everyday parlance. It was as if the author was showing off his intelligence by daring the reader to try and understand him without using a dictionary. I was tempted several times to stop reading! Looking through the characters in the story, I could see the author very clearly in the person of James Malone.

I liked some characters in this story. Advocate Leo Baksh is on top of the list, followed by Anna Dao, Wendy Malone and John Hanes. The story started gathering heat from Part 3. I am happy I read it all through or I would have missed a very interesting ending. That is if it actually ended.

Nancy K.
5.0 out of 5 stars Prescient and complex, with engaging characters; a great read!
Reviewed in the United States on July 27, 2018
Verified Purchase
A multilayered book set in a time much like our own. Individuals fight for the right to be who they are, unconstrained by the limiting definitions imposed by a government claiming to represent their best interests. New quantun technology enables humans to connect with each other more deeply than ever before, but can also be used to dominate and even to kill. The ending, while not the tidy “feel-good” one readers sometimes desire, ultimately suggests a more nuanced understanding of the nature of power, and the need for people to engage constructively, rather than destructively. It is both a timely, and timeless message.
Read more
Helpful
Comment Report abuse

Rene J. Quetel
5.0 out of 5 stars A Great Read
Reviewed in the United States on March 14, 2018
Verified Purchase
This is a great read about a potential world not too far in the future where major groups struggle for power, control, and survival. I loved its unpredictability. So often when I read, I know early on where the story is going. This one kept me in suspense and was full of surprises. It has a sci-fi base in terms of background setting but its real subject is the interaction of various individuals within the stringent stratification of the population known as Aggressives, Vulnerables and the highly aspired to Citizens. Interesting and fast paced. Eric Borgerson has done a masterful job in creating this world which, although positioned in the future, seems portentous in its possibilities for us to view some dimension of it in our lifetime, and in some ways mirrors things already going on.
Read more
Helpful
Comment Report abuse

Janice Bellucci
5.0 out of 5 stars Multi-faceted story with great character development
Reviewed in the United States on March 12, 2018
Verified Purchase
I have just finished reading this amazing book and highly recommend it to anyone interested in a multi-faceted story with great character development! There were times when I couldn't put the book down and other times when I had to take a short break. Why? Because the book and the story it tells are so intense. And yet it is the intensity of both the book and the story that makes reading them both memorable and pleasurable.
Read more
Helpful
Comment Report abuse

Amazon Customer
5.0 out of 5 stars Five Stars
Reviewed in the United States on March 23, 2018
Verified Purchase
This novel is exciting. I couldn't put it down. This WILL be the next big movie! I Cant wait for his next book.! Thanks Eric I enjoyed it !
Read more
Helpful
Comment Report abuse

Indie Book Reviews
5.0 out of 5 stars 5 Stars: I See the Future
Reviewed in the United States on June 23, 2018
A future not far from one we can fathom, "When the Eye Sees Itself" by Eric Borgerson is told in futuristic possibilities, powerful technologies, imaginative and sophisticated storytelling, characters with interesting back stories and psychology sometimes shifting from one genre into another keeping the reader committed to know if there will be cataclysmic ending. Admire the fantastic cover and turn the page.

A future based on classification, not dissimilar than what we endure every day, the designation in "When the Eye Sees Itself" are "Aggressives", "Vulnerables" and "Citizens" of course by design in naming those who are "Citizens" benefit the most and sit on a top of an of a futuristic pyramid. Some of the characters in "When the Eye Sees Itself" take time to peg down their perception and quirks. The main character Leo; a "Citizen" takes on the case of Anna who wants to change her station in life; this brings me to a particular passage I like and why I find Eric Borgerson's writing not your run of the mill.

"These were the loci of Anna’s reluctance. She knew of few people like herself. A Vulnerable by birth, perceptive and sensitive bordering on psychic, and bereft of filters to protect herself from experiencing others’ suffering and dysfunction. Also, an incendiary temper and sometimes violent if she felt threatened. Occasionally overtly cruel if we’re being honest with ourselves, she thought. None of that should be a surprise given what she’d been through, but the law didn’t grapple well with contradictions."

That paragraph made me fear for Anna because there is this simmering of violence, terrorism waiting to boil over in this polarized society, innocent people get caught up much like our reality.

It is a packed novel "When the Eye Sees Itself" some heavy themes but never too graphic when it comes to the violence take your time to understand the vast assortment of people in and out of this story, have a little fun with it see what classification you fall under "Aggressives", "Vulnerables" or "Citizens".
Read more
Helpful
Comment Report abuse
See all reviews from the United States