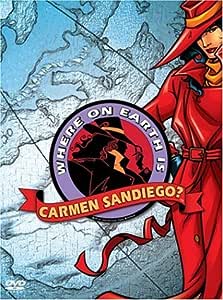 Secure transaction
Your transaction is secure
We work hard to protect your security and privacy. Our payment security system encrypts your information during transmission. We don’t share your credit card details with third-party sellers, and we don’t sell your information to others. Learn more
Details
Ships from
missmarybooks
Sold by
missmarybooks

Save with Used - Good
$11.99
FREE delivery: Saturday, March 6 on orders over $25.00 shipped by Amazon.
Ships from: Amazon
Sold by: Steaze Trading

Where On Earth is Carmen Sandiego?

Where On Earth Is Carmen Sandiego?, the Emmy Award-winning animated series, educates kids of all ages in the subjects of history, geography and fun through its action-packed adventurous tales of Carmen Sandiego and the ACME Detective Agency sleuths Zack and Ivy!

Welcome to the first season of the Emmy-winning computer game-turned-animated series. Meet Carmen Sandiego (Rita Moreno), who swipes a cultural artifact or two in each episode. Dressed in red from fedora to heels, she's a vision out of a Technicolor thriller. On her trail, but always one step behind, are Ivy (Jennifer Hale, Justice League) and kid brother Zack (Scott Menville, Mission Hill) from the ACME Detective Agency. As the Lady in Red drops clues, the wisecracking Chief (Rodger Bumpass, SpongeBob SquarePants), a holographic image, helps the duo to decipher them (shades of 1980s phenomenon Max Headroom). In the pilot ("The Stolen Smile"), Carmen steals the eyes from a Van Gogh self-portrait. Why would she do such a thing? To solve the mystery, the globe-trotting teens travel to Holland, Egypt, and France. Along the way, they call on their knowledge of geography, art history, and zoology. Throughout these 13 episodes, including the two-part finale ("A Date With Carmen"), Ivy and Zack follow the master thief to India ("Dinosaur Delirium"), Russia ("By a Whisker"), China ("Rules of the Game"), and countless other countries. To track her down, the detectives also bone up on archeology, astronomy, biology, music, literature--and that's just to start. Where on Earth is Carmen Sandiego? ran on Fox for three seasons and the Fox Family Channel for its fourth (to add to the confusion, there was also a PBS game show). The fast-paced program combines hand-drawn cel animation--in a style that lies somewhere between Jonny Quest and Scooby-Doo--with stock photography, newsreel footage, and computer graphics. Every installment is book-ended by a live action sequence featuring "Player" (a stand-in for the viewer), who trades quips with Carmen via email. Portentous theme song aside, the end result is educational fun for the entire family. --Kathleen C. Fennessy

4.8 out of 5 stars
4.8 out of 5
38 global ratings
How are ratings calculated?
To calculate the overall star rating and percentage breakdown by star, we don’t use a simple average. Instead, our system considers things like how recent a review is and if the reviewer bought the item on Amazon. It also analyzes reviews to verify trustworthiness.
Top reviews

Crazed Collector
5.0 out of 5 stars I Finally Found Her!
Reviewed in the United States on December 24, 2007
Verified Purchase
Yes, it is true. I have finally found her TV Show. I have been hoping that this series would be released so long ago: So what can I say about this...

If only the biggest reason possible for watching any video: It is both entertaining and educational. Now when I say educational, I don't just mean there is a few things you can learn. I mean there is lots you WILL learn. Although primarily geared at a younger audiance (which means this is perfect for elementary school classrooms!), there is still much I at my age (early 20's) still will learn from this. After watching the whole series once through recently, I knew I would have to watch it at least twice more to learn most of everything it was offering. As well, it is 'Where In The World Is Carmen Sandiego?', so obviously you will learn about things from all over the globe.

Of course, if it were just educational, it would be only classroom appropriate and wouldn't have lasted four seasons. The series does have a good action pace, with well placed humour and deffinite kids appeal. There's even a bit of mystery (through Carmen Sandiego's character -of course). It is a very well rounded show.

Now, the only thing I need to know is... Where in time are the next three seasons coming out on DVD?
Read more
3 people found this helpful
Helpful
Report abuse

Peaceblossom
5.0 out of 5 stars Carmen made learning fun.
Reviewed in the United States on April 10, 2012
Verified Purchase
Wow, I have this boxed set and it is wonderful. Back in the 90's it was a great way for me to learn lots of things just by watching this show. I love the whole "Cat and Mouse" thing with Carmen and the kids Zack and Ivy. The whole interaction between the three and the characters interaction with the player is great. though at times I must admit I felt like smacking the player in the back of the head. Anyway, this is a great DVD set and worth picking up. True, much of the political info will be out of date but it was true for the time it was produced. Still a great way to learn and have fun. I even had a Professor who thought Carmen was a great character. I wish some how the show could have continued a little longer and have a real grand ending. But in the end, it was a show that made people happy and it will make you happy too. So go ahead and buy it, Carmen fans, you'll be glad you did.
Read more
Helpful
Report abuse

Shane
5.0 out of 5 stars A classic cartoon that holds up well
Reviewed in the United States on March 10, 2015
Verified Purchase
A true classic cartoon from my childhood, still fun to watch to this day. It really is worth the time and money to rewatch or even watch for the first time. The DVD was a tad lacking in features I thought. They had story boards to the soundtrack, which was cool but rewatching an entire episode that way which we already saw was a bit much. They had trivia but that was the same ones from the show itself, which was boring. The show itself is well worth the price anyhow.
Read more
Helpful
Report abuse

A. Hoy
5.0 out of 5 stars Can't wait for the Second Season!!!
Reviewed in the United States on August 25, 2009
Verified Purchase
I barely remember this series from when I was a kid, but I picked up a VHS of one of the episodes a few years ago and was hooked. I stumbled on this dvd collection and bought it without a second's notice. I have two younger siblings and they immediately loved this series after watching the whole season in one sitting. I'm telling you, Carmen Sandiego's exploits are timeless, and it's this kind of "suave education," if you will :), that really attracts kids. Carmen is such an intensely mysterious character and you really can't help but be torn between which of the characters you cheer for (Carmen or the ACME Kids) in this show.

The animation is exceptional--I always loved that opening sequence. :) You may want to watch out as there are some facts that don't resonate with what is being taught about the world today, such as when the kids are talking about how people in Old England talked like characters in Shakespeare's plays. But for the most part everything is still incredibly informative, and even I learned some things that I didn't know before.

The character development at this point is still beginning, since it is after all only the 1st season, and admittedly the episodes so far are pretty much formulaic. I think this can only be expected, however, since the series creators are crunching education and action along with the storyline into less than 30 minutes. I wiki'd the series and apparently the story does get more intriguing bit by bit as each season progresses.

Which is a nice segue into this question: What happened to the next season on dvd???!! This season came out in 2006 and here we are 3 years later and still no season 2!! What is going on people? I'm serious, if they release season 2, I will buy it without a second's thought. This show is just that good. So really, if the people behind the production of these dvds ever read the reviews, send out the other seasons so all of us CS fans can give you our money!!

In conclusion: I wish they had shows as good as this on tv nowadays. :( But that's why I want all of CS out on dvd!
Read more
One person found this helpful
Helpful
Report abuse

DisneyDenizen
VINE VOICE
5.0 out of 5 stars SUPREMELY EDUCATIONAL
Reviewed in the United States on January 30, 2020
Verified Purchase
My daughter LOVED all things Carmen Sandiego. Fun and educational! It doesn't get any better than that.
Read more
Helpful
Report abuse

Amazon Customer
5.0 out of 5 stars Thank you for sending it to me and I did give you all five stars!
Reviewed in the United States on June 28, 2018
Verified Purchase
Yes, I’d loving to watch it since I was childhood to watch it. I felt just like a kid again lol.
Read more
One person found this helpful
Helpful
Report abuse

Victoria A. Pettit
5.0 out of 5 stars Classic
Reviewed in the United States on August 2, 2013
Verified Purchase
My children loved these when they first came out and my granddaughter loved them later. This item arrived on time and is an excellent purchase. I like it very much and am VERY glad I ordered it. Thank you so much Amazon.com for the great price, good value and prompt delivery. I use this item frequently.
Read more
Helpful
Report abuse

Hawkway
5.0 out of 5 stars mom for educational fun
Reviewed in the United States on February 28, 2009
Verified Purchase
My kids love this show (9 and 7). They have certainly learned new things from it. It is exciting and has a real kid draw while dishing out the info. My kids watch the shows over and over and now know all the information given in the shows (places, peoples, definitions) by memory.

I really wish they would release additional series. I would buy them immediately.
Read more
3 people found this helpful
Helpful
Report abuse
See all reviews