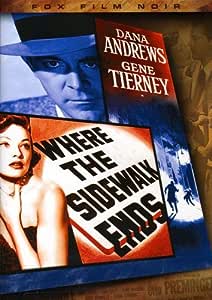 A police detective beats a suspect to death, then tries to pin it on a mob boss. Directed by Otto Preminger.

Otto Preminger made four films noirs at Fox, all terrific. If we set aside the peerless Laura as more psychological mystery-romance than noir, there's plenty of evidence for judging Where the Sidewalk Ends the best of the lot (the other two being Fallen Angel, a study in small-town perversity, and Whirlpool, a delicious exercise in creepy psychology, slippery mise-en-scène, and daringly complicated point-of-view). It's a hard-edged tale of a borderline-vicious New York police detective, Mark Dixon (Dana Andrews), with tortuous personal reasons for overzealousness in going after the bad guys. Much of the film unreels in one night, when the murder of a high-roller from out of town precipitates a string of events that lead to Dixon's becoming an accidental killer. Preminger's direction is taut, forceful, and fluid, especially when Dixon sets about creating an alibi for himself. Unfortunately, an innocent man gets implicated, with Dixon looking on, and the guilty cop's moral and psychological torment increases with each turn of the screw.

Tightly scripted by Ben Hecht, Preminger's film lacks the anguished poetry of Nicholas Ray's On Dangerous Ground, another 1950 noir centered on a cop (Robert Ryan) addicted to ultraviolence, but its grip is relentless. Preminger had a shrewd instinct for tapping a certain thuggish strain in Andrews, whose performance here is arguably his best. They're reunited with Gene Tierney, as a woman caught in the sidewash of sordid goings-on, and Laura cameraman Joseph La Shelle, whose work has a luster beyond the accustomed semidocumentary look of Fox noirs. Gary Merrill, usually a bland nice-guy, relishes the chance to play nasty as Dixon's gangland bête noire Tommy Scalise, a homoerotic villain in the Tommy Udo vein with a menthol inhaler as fetish object. --Richard T. Jameson

4.5 out of 5 stars
4.5 out of 5
187 global ratings
How are ratings calculated?
To calculate the overall star rating and percentage breakdown by star, we don’t use a simple average. Instead, our system considers things like how recent a review is and if the reviewer bought the item on Amazon. It also analyzes reviews to verify trustworthiness.
Top reviews

If you like film noir (which, presumably you do, or you wouldn't be reading this), then you owe it to your self to see this movie (if you haven't seen it already; or, to see it AGAIN if you have). All of the usual attributes of the genre are here — namely: the high-contrast lighting, the off-kilter camera angles, the highly-stylized visual composition, the in-over-his-head-but-doesn't-know-it "tough guy" cop/detective, the beautiful damsel-in-distress/femme-fatale, the collection of shady (but, colorful) characters, and the dead body. But — as any true fan of the category knows — just because you have all of the parts doesn't mean that you have a good movie (or, as in some cases, even a watchable one). Well, rest easy noir fans — because this one takes all of the "usual suspects" (plus, a few more) and blends them together seamlessly to produce one of the best examples of the art form! I think it's tragic that when people congregate and talk about GREAT examples of film noir, that this movie isn't mentioned more often (if, at all)! See it, then tell your friends about it. HIGHLY RECOMMENDED!

NOTE: This movie is one of the films from Fox Home Video's exemplary "Fox Film Noir" series of DVDs (and, in some cases, blu-rays). Every one of the DVDs from this series that I have purchased (e.g.—this movie,

See the other reviews for more detail and/or other opinions regarding the plot of the movie.

Within the confines of the DVD format, this film exhibits VERY good, to — on frequent occasions — excellent, picture quality; due, in part, I'm sure, to a MUCH higher than average bit-rate than is normally used for a 4:3 (1.33:1) B&W catalogue title. Also, Fox Home Video doesn't state on the box that this movie has been restored or remastered, but it surely looks like it — because, artifacts such as black specks or white dots are nearly non-existent; and, I saw very few hair-lines, nor do I recall seeing any dropped frames. In addition, sharpness and detail (for a DVD) are usually very good — with the textures and patterns of most hair-styles, clothing and furnishings being easily discernible. Lastly, contrast, gray scale and shadow-detail (again, for a DVD) are VERY good overall, and in many scenes, even excellent. Overall, this movie's presentation on DVD has VERY good picture quality, and should satisfy all but the absolute pickiest of viewers.

Fox Home Video has apparently also done some clean-up work on the film's soundtrack, because there are no loud bumps nor objectionably high levels of hiss. Also, dialog is very clear and all voices are easily understood. However, dynamic range is very limited, and there is not much bottom-end nor any top-end to speak of (which makes the musical score and the Foley work all sound a little 'thin', and somewhat less than realistic). Otherwise, considering the age of the source elements and the fact that this is a monophonic, dialog-driven movie from the early 1950s, its audio presentation has more than acceptable sound quality.

None of the extras were reviewed.
Read more
18 people found this helpful
Helpful
Report abuse

Jeannie LS
5.0 out of 5 stars Noir unleashed
Reviewed in the United States on November 27, 2020
Verified Purchase
The story of a guy (ny detective) with anger issues, and a violent temper against hoodlums and gangsters that at one time included his father.
Gets caught up accidentally killing a guy who turns out to be the friend of a girl he has the hots for. Gene Tierney never looked better in a sweater.
He performs a great cover up but.....
Read more
Helpful
Report abuse

FRED C. DOBBS
4.0 out of 5 stars WONDERFUL FILM NOIR FALLS JUST SHORT OF CLASSIC STATUS
Reviewed in the United States on March 7, 2009
Verified Purchase
Really enjoyed this wonderfully atmospheric noir. Great New York black & white shots, a sharp, smart even sensitive script, great characters and, best of all, everybody getting slapped around mercilessly including diva Tierney. Dana Andrews, who at first appeared miscast, was outstanding as the grizzled no-nonsense veteran cop who accidentally kills while trying to find a killer. Everybody in this was simply at the top of their game---probably a result of Otto Preminger's direction. Bert Freed, one of those "I've seen him before" character actors, was excellent as Andrews' cop partner. Gary Merrill, another familiar face, gave the performance of his career as the prime suspect. Karl Malden, in an early career role, was in his usual fine form as Andrews' annoyingly 'know-it-all' new boss. And ANY movie with Neville Brand has gotta be good! 'The old lady in the cafe' & 'the old lady at the window' were two fine characterizations. And how about the 'nasal-spray' pumping ringleader Merrill getting a rubdown in the Turkish baths around his "young" thugs. Preminger, never averse to tackling controversial issues [remember THE MAN WITH THE GOLDEN ARM, 1955], gave us quite a singular, androgynous and perverse bunch of mobsters, possibly serving as the impetus for the wierdo atypical mobsters we saw at the end of David Cronenberg's A HISTORY OF VIOLENCE [2005]. What fun this was! This is definitely a genre classic BUT what kept this from being an all-around classic? Not my two minor beefs: 1- Tierney being miscast & 2- the way Andrews got rid of the body: through the front door! [geez!]; but, the way the movie ended. Many great movies often have a great [and hopefully happy] ending. However, here we have the movie end with Andrews surviving a gunshot, the mob, apparently vindicated and ready to walk off into the sunset with Tierney, only to see him admit his accidental killing and basically losing it all at the end. After watching the lonely cop [Andrews] and battered-wife [Tierney] find each other in this rough-and-tumble movie a happy ending was what we were primed to expect. It would have sewn this up perfectly. Major gaffe, Otto!
Read more
10 people found this helpful
Helpful
Report abuse

Allen SmallingTop Contributor: Classical Music
TOP 1000 REVIEWER
5.0 out of 5 stars Top-Notch Noir with a great cast and director
Reviewed in the United States on January 7, 2017
Verified Purchase
WHERE THE SIDEWALK ENDS (1950) is wonderful Noir, perhaps second only to LAURA in the Fox canon. Dana Andrews and Gene Tierney, drawing slightly on their iconography from that earlier movie, play the hard-bitten cop and the stylish ad woman, respectively. But this time Andrews' character kills a bit hood (a pre-PETER GUNN Craig Stevens) while trying to get to the big hood (Gary Merrill). The reluctant murderer pretends to go on the lam but really hangs around, and his unwitting colleagues, with every ironic good intention, draw the bead on every suspected murderer but Andrews himself -- at first. Otto Preminger's telling direction and luminous performances from all actors (including Karl Malden) make this film a standout. The Commentary by Noir specialist Eddie Muller is excellent. All in all this is a film not to be missed, even if you aren't a particular Film Noir enthusiast. The current price makes this DVD a bargain.
Read more
8 people found this helpful
Helpful
Report abuse
See all reviews

Mr. M. Sanders
5.0 out of 5 stars Where the sidewalk ends
Reviewed in the United Kingdom on January 26, 2020
Verified Purchase
A great film noir from Otto Preminger. With a strong cast including a young Karl Malden, this is a pacey old school black and white film with plenty of tension. When Dana Andrews' character as a rough and ready New York police detective is passed over for promotion due to his heavy handed methods, he starts a personal vendetta against Gary Merrill's mobster character. When a card sharp in a game with Merrill's associates apparently is stabbed in the aftermath of a game, then the chase is on to find the culprit. It all goes badly wrong from here! A great film.
Read more
Report abuse

Roland Anthony
5.0 out of 5 stars who did it
Reviewed in the United Kingdom on September 29, 2019
Verified Purchase
a good whodoneit,with a surprise twist at the end. a good performance by dana Andrews and Charles bickford
Read more
Report abuse

Keith Wilton
1.0 out of 5 stars Bad show all
Reviewed in the United Kingdom on March 3, 2018
Verified Purchase
Disc would not play due to being either a faulty pressing or only partly 'burned' - disc returned to Spain several weeks ago but no replacement or any contact whatsoever. Bad show all round
Read more
Report abuse

charley208
5.0 out of 5 stars Buy it
Reviewed in the United Kingdom on December 6, 2015
Verified Purchase
Been looking for this film for a while now, Dana Andrews play a great role love all these black and white films
Read more
2 people found this helpful
Report abuse
See all reviews