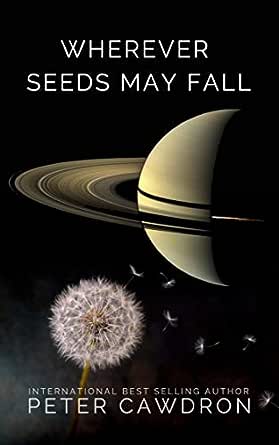 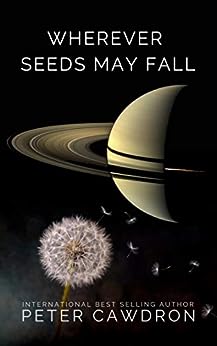 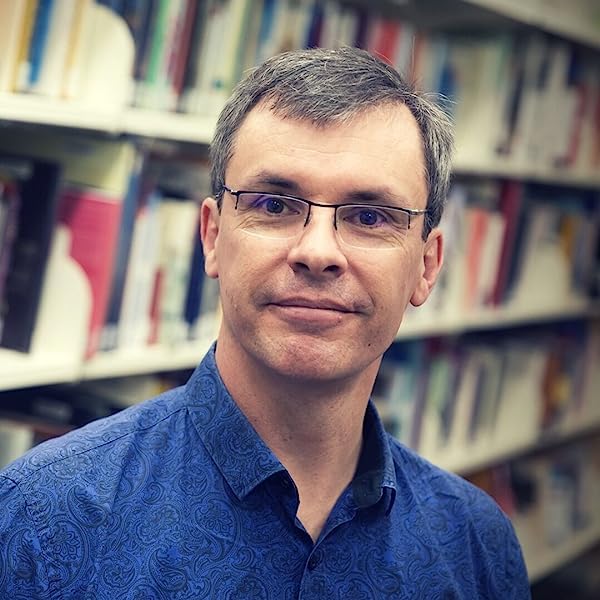 ★★★★★ - "I am going to turn around and read this one again. For me, this novel is a study in what excellent science fiction is all about." Wally Lafferty
★★★★★ - "I downloaded this on a whim based on an 'after-book' recommendation from another author. I'd never heard of Cawdron and, boom, just like that I'm hooked."
★★★★★ - "there [are] no single dimension characters, no bad romantic sub plot lines, no inexplicable and unrealistic behaviors."
★★★★★ - "It is, without a doubt, the best science fiction book I have read in a long time and, to be sure, I read a lot of them."
★★★★★ - "This was the first book I've read by Peter Cawdron, but it will not be the last. Pacing is great, the characters are well developed, the science fiction has factual basis. I heartily recommend it."

Wherever Seeds May Fall was inspired by an online discussion between Dr. Katie Mack and a bunch of astrophysicists on Twitter. They were discussing an extra-solar asteroid racing past Earth. Speculation was rife that 'Oumuamua was an alien spacecraft. Dr. Mack pointed out that there's no one that would be more pleased with such a conclusion than her, but that there was no evidence for it. All the evidence suggests 'Oumuamua is as natural as a comet. Critics claimed a cover-up. Dr. Mack pointed out the impossibility of governments conspiring to keep scientists quiet as so much of modern astronomy relies on international collaboration. Based on her open, honest, frank discussion, I asked myself, "What would convince Dr. Mack?" and that became the inciting incident for this novel.

4.7 out of 5 stars
4.7 out of 5
163 global ratings
How are ratings calculated?
To calculate the overall star rating and percentage breakdown by star, we don’t use a simple average. Instead, our system considers things like how recent a review is and if the reviewer bought the item on Amazon. It also analyzes reviews to verify trustworthiness.
Top reviews

M J W 01
5.0 out of 5 stars Truly excellent read!!
Reviewed in the United States on January 24, 2021
Verified Purchase
This was a great read! I downloaded this on a whim from a "after-book" recommendation from another author. I'd never heard of Cawdron and, boom,just like that I'm hooked. Both on his writing style and his choice of characters. I'm going back to order another. This is hard science made easy. Wonderfully informative and exquisitely entertaining. Good stuff!
Read more
8 people found this helpful
Helpful
Report abuse

The Cheif
5.0 out of 5 stars A real page turner and it makes you think
Reviewed in the United States on January 27, 2021
Verified Purchase
Peter Cawdron is one of my favorite authors over the last few years. His books are real page turners, Sci-Fi, without all the combat and warring that seems to be flooding the genre over the last couple of decades. I know when I start reading one of his books there will be no single dimension characters, bad romantic sub plot lines, inexplicable and unrealistic behaviors, and no space-saga 25-books series. I think I have read all of his books and now buy them without even reading the 'hook'. I am surprise that much more with the unexpected story unfolding as I turn the page.

I greatly enjoyed the story and could see how it could actually happen. The climax was very surprising and is a possible answer to the Fermi paradox. Enjoy!
Read more
5 people found this helpful
Helpful
Report abuse

Cosmo
5.0 out of 5 stars An epic read by an epic author
Reviewed in the United States on January 23, 2021
Verified Purchase
Wow, what a ride! I was hooked from the first few pages and couldn’t put this treasure down. I loved the pace of the book-the story kept building and building-keeping me in suspense until the end. The kind of book to lose yourself in-well developed and interesting characters and a plot that you can’t turn the pages fast enough! Another masterpiece by a gifted writer who knows his science! Bravo!
Read more
6 people found this helpful
Helpful
Report abuse

Douglas Phillips, author of Quantum Space
5.0 out of 5 stars Entertaining, accurate, and thought provoking!
Reviewed in the United States on February 3, 2021
Verified Purchase
How would first contact with an alien race really go down? Hint: they wouldn't just appear in the sky one day. Peter Cawdron is a master at accurately portraying space travel: the intricacies of gravity wells, elliptical orbits, and those pesky orbital mechanics that no one - not even advanced aliens - can avoid. Before any aliens arrive at Earth, we'll know they're coming. Their inbound track will be unmistakable.

Peter's stories are usually darker than my personal tastes but that doesn't make them any less intriguing to read. (In my own stories main characters never die, but in a Peter Cawdron story you just never know.) Like most of his stories, this one is tense. Anything could happen. Edge of your seat kind of stuff. Best of all, when you're done there are lots more of his books to pick up!
Read more
4 people found this helpful
Helpful
Report abuse

C L Brown
5.0 out of 5 stars Fantastic read! I was glued to my laptop from page one!
Reviewed in the United States on January 29, 2021
Verified Purchase
I happened upon "Wherever Seeds May Fall" due to a link in an email from a different author (C. Gockel, I recommend her books as well). The blurb was enough to pique my interest so I clicked on the link. Arriving at the page on Amazon, I availed myself of the "Look Inside" feature. And found myself reading the entire preview and instantly wanting more. Well, that was all it took. I purchased the book, spent the next several hours literally glued to my seat before my laptop and only came back to reality when I read the words "The End". I gave the book 5 stars. If I could, I would give 10! I think the book is fantastic! This was the first book I've read by Peter Cawdron, but it will not be the last. Pacing is great, the characters are well developed, the science fiction has factual basis. I heartily recommend it.
Read more
4 people found this helpful
Helpful
Report abuse

Wally Lafferty
5.0 out of 5 stars TEN STARS, if I could
Reviewed in the United States on January 31, 2021
Verified Purchase
Wow. I've just finished reading Wherever Seeds May Fall, and I would put this right up there among the best science fiction novels I've ever read. First Contact is my favorite genre, but so many authors treat this topic in unrealistic situations. I get upset when the laws of physics are violated in careless ways. Peter has created a sensational first contact story here that presents science for what science really is. And he does it remarkably well.

Honestly, I am going to turn around and read this one again. For me, this novel is a study in what excellent science fiction is all about. I look forward to re-reading it, and others from Peter Cawdron.
Read more
4 people found this helpful
Helpful
Report abuse

Mal Warwick
TOP 500 REVIEWER
5.0 out of 5 stars Brilliant, and full of surprises
Reviewed in the United States on February 22, 2021
Verified Purchase
It seems unlikely to me that anyone, anywhere, has thought longer or harder about First Contact than Peter Cawdron. In his fifteenth novel on the theme, the gifted Australian science fiction author poses yet one more solution to the Fermi Paradox. “In the summer of 1950,” Cawdron explains, “while sitting around a table having lunch, physicist Enrico Fermi casually asked his colleagues, ‘Where is everyone?‘ . . . He understood that, given the sheer size of the universe, there should be other intelligent species out there . . . so where were they?” In Wherever Seeds May Fall, Cawdron offers up a novel explanation for The Great Silence that’s sure to surprise. Get ready for humankind’s first encounter with extraterrestrial life.

Wherever Seeds May Fall opens in the near future as a newly discovered comet heads deeper into the solar system from Saturn on its way to Jupiter. There, the object named Comet Anduru—the word in Sinhalese loosely translates as “The Dark Prince”—is expected to crash into the clouds of Jupiter much as did Comet Shoemaker-Levy 9 in July 1994. But Anduru instead glances off the outer atmosphere of the gas giant and speeds, somewhat more slowly, toward the inner solar system—and Earth.

As astronomers are well aware, NASA frequently uses the Venus-Venus-Earth-Jupiter Gravity Assist (VVEJGA) to conserve fuel and increase the velocity of spacecraft on their way to the gas giants. It’s clear that Anduru is reversing the process, slowing down on its way to Earth using the gravitational attraction of several other planets along the way. Within months, then, humanity’s first encounter with extraterrestrial life will be a reality.

Although the cast of characters is large and includes the President of the United States, Wherever Seeds May Fall centers around two people.

** Newly promoted Lieutenant Colonel Nolan Landis of the US Air Force holds down a desk job near the space force installation at Cheyenne Mountain in Colorado. There, he and his team think the unthinkable about potential existential threats to the United States and to humanity at large.

** Dr. Kathleen (Kath) McKenzie is an astronomer at NASA’s Ames Astrophysics Laboratory. Gregarious and a gifted communicator, she maintains contact online with a global team of other scientists engaged in astrophysics and astronomy.

Col. Landis and Dr. McKenzie are among the very first people on Earth to suspect that Comet Anduru is an alien vessel. And they are called upon by the American government to help plan and manage the response to Anduru as the time of the comet’s arrival grows ever nearer.

The approach of Comet Anduru triggers waves of hysteria all across the earth.

** In all the major powers—China, Russia, the US—the military begins preparations for an alien invasion. The reigning assumption is that Anduru represents a hostile extraterrestrial force. One country after another gears up to wield nuclear weapons against the intruder.

** Meanwhile, the scientists who possess the most accurate and up-to-date information about Anduru begin mobilizing to calm the public, insisting that it is extremely unlikely an extraterrestrial visitor traveling for hundreds or thousands of years will have come to invade Earth.

Long before Anduru’s arrival, Col. Landis and Dr. McKenzie are drawn into the inner circle of those in the White House who are planning the American response to the visitor. And the are on the front lines when it comes time for the first encounter with extraterrestrial life by the human race.
Read more
2 people found this helpful
Helpful
Report abuse
See all reviews