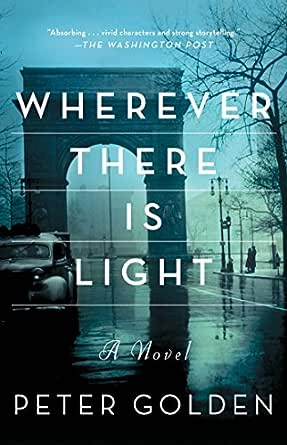 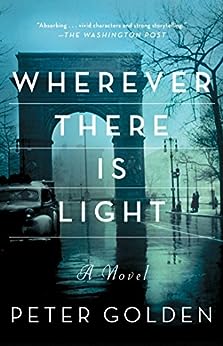 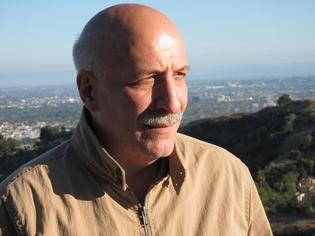 Wherever There Is Light: A Novel Kindle Edition

Peter Golden is an award-winning journalist, novelist, biographer, and historian. He lives outside Albany, New York, with his wife and son. He is the acclaimed author of the novels Comeback Love, Wherever There Is Light, and Nothing Is Forgotten.

Wherever There Is Light

Julian Rose was about to have his life upended again, but he didn’t know it, not as he hurried through South Orange Village. The Christmas lights strung above the sidewalks and in the store windows transformed the snowflakes into sparks of red, green, yellow, and blue and emblazoned the crowds of shoppers with a pastel glow, which gave Julian the impression, as he walked toward Gruning’s Ice Cream Parlor, that the magic of the season had dropped him inside a painting.

Julian rarely missed an afternoon at Gruning’s after visiting the cemetery. He ordered a scoop of coffee chip with hot fudge and whipped cream. The bill always came to under two dollars, but he left a five-spot for a tip. Understandably, some waitresses hoped that he would take a different table instead of the one in back facing the doors. He never did. That was because Gruning’s was located between Columbia High School and South Orange Junior High, and by three thirty it was loaded with teenagers. Julian loved watching them burst through the doors in bright, noisy packs and imagining that his daughter, Holly, was among them. The kids would walk toward him, then turn up the stairs to a side room, and the blend of their voices, laughter, and the rock and roll they played on the jukebox soothed Julian in a way he found difficult to explain and impossible to give up. All he knew was that while Holly had been deprived of her future, these children would one day start families of their own, and that reality was enough to temper, for a blessed moment, his heartache.

When Julian finished his ice cream, he walked up front and stood in line at the register, which was behind the glass cases of homemade candies. A Negro woman with a maroon kerchief over her head and clutching a black pocketbook to her chest was talking to the cashier. Beside her was a slender brown stalk of a boy holding a battered valise. The Negro woman was speaking too softly for Julian to hear her, but he could hear the older couple ahead of him, a bald man in a Chesterfield topcoat and his blue-haired wife in a mink stole—three dead animals attached head to tail.

The man said, “Darling, do we really need to wait for chocolate cherries?”

“Yes,” she replied, turning and nodding back toward the Negro woman and the boy. “Don’t blame me. I didn’t know the candy stores closed in Newark.”

The most generous interpretation of her comment, Julian thought, was that she disliked waiting behind colored people. He wished the minks would spring to life and bite her. Since that was unlikely, he glared at the woman. In his younger days, Julian had been a regular at the Stork Club and other stops on Manhattan’s party circuit, and pictures of him, tall, broad-shouldered with dark, wavy hair alongside actresses and high-society girls in pursuit of pleasures unavailable at cotillions, filled the tabloids. More than one gossip columnist had noted that Julian had the rugged good looks and easy grace of a movie star, complete with a strong jawline and cleft chin. But clichés didn’t do justice to his presence or explain why people in general and women in particular frequently stared at him when he entered a room. His face seldom registered emotion, and it was his stillness, combined with his steady, blue-eyed gaze, that made him so magnetic and gave him a vaguely menacing air.

The woman didn’t seem taken with, or intimidated by, Julian. She glared back at him, obviously believing that she had nothing to fear from this overage Ivy Leaguer in a muddy-patterned tweed sport coat, a hideous pink shirt, and a silly tie dotted with red-and-white dice—the last gift his daughter had given him.

Swiveling around to see the object of his wife’s disdain, the bald man had a different reaction. Perhaps it was because someone had once pointed out Julian to him or because he remembered his picture from the newspapers and the stories he’d read about the prince of bootlegger royalty in Newark, the late Longy Zwillman’s boy wonder, who unlike Longy had dodged every government investigation and parlayed the lucre that sprouted in those illegal bottles of spirits into a real-estate empire.

“Let’s go,” the man said to his wife and pulled her toward the doors, the wife walking backward, keeping her angry eyes on Julian.

He ignored her and paid the cashier. The Negro woman and boy were gone, and he didn’t see them out on South Orange Avenue, where gas lamps shone in the snow-flecked light. Julian considered walking up a block to his broker’s office and saying hello to his money, but that bored him. Better to go home and read the Newark Evening News and watch a little TV.

“?’Scuse me, suh,” a woman said, and Julian looked down and saw the Negro woman shivering next to him in her raincoat. The hair visible under her kerchief was white and her face was as furrowed as a walnut shell. “You Mr. Julian Rose?”

It was a shock hearing her name. “Kendall, yes. How is she?”

The wind was blowing the snow against his face, but Julian couldn’t feel the cold. He heard himself say, “Dead?”

“Yes, suh. And she make me promise to come find you if somethin’ happen. I get change to call yoah house and the cleanin’ girl say y’all most likely be heah. A waitress tell me you jist left.”

“He gettin’ a ice-cream cone.”

“And he be yoah son too.” --This text refers to an alternate kindle_edition edition.
Read more

4.3 out of 5 stars
4.3 out of 5
95 global ratings
How are ratings calculated?
To calculate the overall star rating and percentage breakdown by star, we don’t use a simple average. Instead, our system considers things like how recent a review is and if the reviewer bought the item on Amazon. It also analyzes reviews to verify trustworthiness.
Top reviews

Anne Sweeney
2.0 out of 5 stars Lost me
Reviewed in the United States on March 2, 2016
Verified Purchase
<strong>This book lost me</strong>

This writer is very good with words but this story was terrible. Esp toward the end. It went everywhere. And someone is held captive for almost a year and they don't have trauma upon release and can go out and eat ice cream like nothing happened? Totally became unbelievable for me two thirds thru and then the last part was awful. Bobby just appears and it takes the writer too much time to explain his showing up and its never fully explained how a nine yr old got to Newark alone bc if he came w Lucinda she would have told Julian right away about Kendall and then he would have done something right off. Frankly the entire Bobby part was dumb and really sadly the part about Julian's marriage was boring. Just a setup for the last bad section of the book. This book could have ended much sooner with a better well thought our ending. A romance novel turned spy novel turned detective novel. Lost me.

Bonnie McKirdy
2.0 out of 5 stars Not as Good as it Sounds
Reviewed in the United States on April 27, 2016
Verified Purchase
The review was better than the book. It did not hold together. The time line jumped all around, and you were never sure if this chapter was a happening before the last or looking back to the distant past or following the former chapter. There were glimpses of times in other countries and war episodes. However, there was never enough time or description given to those episodes to get a feel for how it really fit into the story as a whole. I knew this was not going to be a favorite when I was 25% into the book. However, it had a great review, so I persevered and finished it instead of reading one of the many other good books I could have gone on to.
Read more
2 people found this helpful
Helpful
Report abuse

DP
4.0 out of 5 stars Very enjoyable easy read.
Reviewed in the United States on February 5, 2016
Verified Purchase
I think it must be very hard to write a good adult novel when told from the perspective of a 13 year old boy coming of age. Since he was too young to be involved in all of the real adult action, the author had to make sure the boy was positioned to eavesdrop on adult conversations in order to move the plot; this became a bit tiresome and unrealistic. Though a little predictable, it was a good story that kept me reading. This story deals with the realities of life and the fact that happiness is not constant but comes in waves. The story could be depressing if not balanced by the hope and strength of the human heart and our capacity for love and spirituality. This was my first book by this author. His writing flows nicely and I thoroughly enjoyed his descriptions of nature and human emotions.
Read more
2 people found this helpful
Helpful
Report abuse

Bobbi Kornblit: author of SHELTER FROM THE TEXAS HEAT
5.0 out of 5 stars Loved the book. Hoping for the movie!
Reviewed in the United States on November 12, 2015
Verified Purchase
Peter Golden creates a vivid picture of a love story set in turbulent times. Like his first book, Comeback Love, the reader is privy to the longings of a male protagonist, Julian Rose, a scrappy bootlegger who later makes a fortune in real estate. The object of his desire, Kendall Wakefield, is one of those free-spirited characters who follows her dream to become a successful photographer. Their struggle to connect amid the unrest in the world around them presents a compelling novel that explores issues of race, art, relationships, and war. I couldn’t put it down!
Read more
One person found this helpful
Helpful
Report abuse

Tammy Ronas-Slate
4.0 out of 5 stars Artistically written
Reviewed in the United States on April 10, 2016
Verified Purchase
I liked that the author wasn’t afraid to delve into these heavier topics. Interracial relationships and the history that go along with them are as relevant today as they were then.The author delves into murder, lynching, racial pressure from both sides of the color spectrum to not mix, and betrayal while telling this good story.
Read more
Helpful
Report abuse
See all reviews