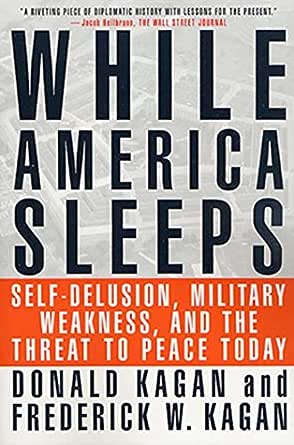 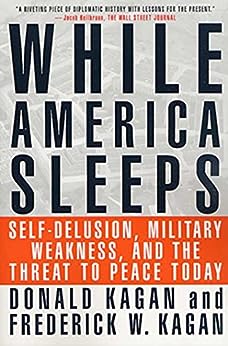 In the aftermath of costly victory in World War I, the government of Great Britain downsized its military, avoided confrontations with powers large and small, and attended to domestic matters and quality-of-life issues. While England slept, in Winston Churchill's famous phrase, governments less concerned with sticking close to the hearth rose elsewhere and held sway. The result was World War II and, after it, the cold war.

The post-cold war United States, historians Donald and Frederick W. Kagan argue, resembles that cozy England in many ways. In the wake of Vietnam, the American government has been reluctant to commit its forces to the purpose of policing the world--though, the Kagans write, "if the United States is not to take a leading part in such a constabulary, who will?"--and has pursued a policy of brief, limited military encounters that involve little risk of incurring casualties. This policy, coupled with a long period of reductions in military spending and staffing, will, the Kagans believe, lead to disaster, as some other Hitler, or Saddam, or Kim Il Jung rises to trouble the world. Acknowledging that historical analogies are only approximations, the Kagans earnestly argue that England's and America's respective patterns of "self-deluding pseudo-engagements" have proved and will again prove to be misguided evasions, and that it will be in the world's ultimate interest for the United States to remain militarily strong and unafraid of a fight.

Though readers may not agree with their conclusions, the Kagans make a convincing case backed by thoughtful historical analysis. --Gregory McNamee --This text refers to an out of print or unavailable edition of this title.

Father Donald (The Western Heritage) and son Frederick, professors of history at Yale and West Point respectively, have combined their talents to produce a frightening story of close parallels between Great Britain in the 1920s and 1930s and America in the 1990s. After 1918, Britain slashed its armed forces and defined its interests in the context of international organizations and agreements. The result, contend the Kagans, was a foreign policy of "pseudo-engagement"Arhetoric unaccompanied by the effective use of forceAthat steadily undermined Britain's credibility. In a series of chapters written in acid, the Kagans argue that the U.S. has set itself up for a similar fall by diminishing its military capacities in pursuit of an ephemeral "peace dividend" and by overextending its armed forces in pursuit of poorly defined responsibilitiesAIraq, the Balkans, North Korea. The Kagans suggest that the U.S. now stands about where Britain did at the end of the 1920sAsomewhere on the bubble: in a position to restore the balance between military power and international responsibility, but facing strong temptations to procrastinate and deny. (It was 1938, the Kagans point out, before the British government faced squarely the consequences of its relative disarmament.) Readers may not agree with the Kagans' analysis of the synergy between military power and national policy, but they will be impressed by the force of their argument and the power of their reasoning. (Oct.)
Copyright 2000 Reed Business Information, Inc. --This text refers to an out of print or unavailable edition of this title.

Donald Kagan is professor of history and classics at Yale University. His son, Frederick, is a professor of history at the U.S. Military Academy. Together they promote the alarming if debatable thesis that a general war with a world (rather than regional) power such as Russia or China is still a realistic possibility. Conversely, they reject the prevailing wisdom that for the foreseeable future, American wars are likely to be small-scale conflicts in which American technological advantages will ensure a quick, "painless" victory. Based on those suppositions, they find^B the U.S. military dangerously unprepared, as planners have neglected manpower needs while overrelying on "smart" weapons. To support their views, the Kagans draw comparisons with British military policies between the world wars. Although some of these comparisons seem strained, others ring disturbingly true. And although some of the fears expressed here may seem far-fetched, this challenge to some of the basic assumptions about our role in the post-cold war world deserves serious consideration. Jay Freeman
Copyright © American Library Association. All rights reserved --This text refers to an out of print or unavailable edition of this title.

“A riveting piece of diplomatic history with lessons for the present.” ―Jacob Heilbrunn, The Wall Street Journal

“In Donald Kagan's superb works on ancient and later history we find that rare combination--brilliant scholarship and sturdy common sense--qualities that, with Frederick Kagan, he here deploys in a thorough analysis of the failures and misunderstandings that nearly ruined Britain before World War II and, even more strikingly, of the ay in which they are being dangerously replicated in American policy today.” ―Robert Conquest, author of Reflections on a Ravaged Century

“This book should be read carefully by policy makers in the new administration and Congress.” ―Gary Anderson, The Washington Times

“Theirs is a polemic that manages, through meticulous detail, careful qualification, and absence of exaggeration, to avoid twisting the historical record.” ―Lawrence F. Kaplan, The Weekly Standard

“A frightening story . . . Readers will be impressed by the force of their argument and the power of their reasoning.” ―Publishers Weekly

“The challenge to some of the basic assumptions about our role in the post-cold-war world deserves serious consideration.” ―Booklist

“A convincing case for the concerns over the real costs of a downsizing military.” ―Kirkus Reviews

Donald Kagan is one of America's most eminent historians. He is the Hillhouse Professor of History and Classics at Yale University and the author or coauthor of many books including The Western Heritage, On the Origins of War and the Preservation of Peace, and a four-volume history of the Peloponnesian War.

Frederick W. Kagan is an assistant professor of military history at the U.S. Military Academy at West Point and the author of The Military Reforms of Nicholas I.