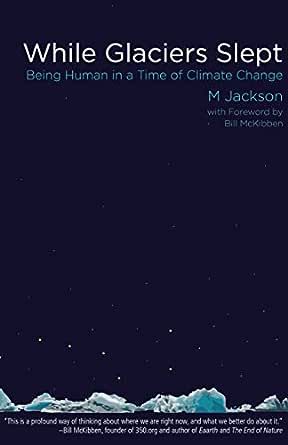 While Glaciers Slept: Being Human in a Time of Climate Change Reprint Edition, Kindle Edition

Flip to back Flip to front
Audible Sample Playing... Paused   You are listening to a sample of the Audible narration for this Kindle book.
Learn more
ISBN-13: 978-0996897334
ISBN-10: 099689733X
Why is ISBN important?
ISBN
This bar-code number lets you verify that you're getting exactly the right version or edition of a book. The 13-digit and 10-digit formats both work.

"I cannot untangle in my mind the scientific study of climate change and the death of my parents." M Jackson is a scientist, National Geographic Expert and glacier specialist, but her memoir While Glaciers Slept: Being Human in a Time of Climate Change rarely takes a scientific perspective and never claims objectivity. Rather, Jackson tells the story of losing both her parents when she was a young woman just embarking on life, and the trauma and extended grieving process that resulted.

Following a brief, lovely foreword by Bill McKibben, Jackson poetically conflates her loss with the slow and still mysterious effects of anthropogenic climate change. Her scientific background and explorations of fascinating places—Denali and Chena Hot Springs in Alaska, Zambia with the Peace Corps—inform her writing and yield striking images, as she runs on spongy Alaskan tundra or contemplates cryoconite holes atop glaciers. But it is the personal side of her narrative that allows Jackson to address society's psychological difficulties with climate change.

Each chapter of While Glaciers Slept is a finely braided essay, considering an aspect of her parents' lives or deaths alongside a facet of climate change's challenges. Jackson mourns her mother with the help of Joan Didion's writing; windmills offer possible "undulating answers" and comfort her on her drive home upon learning that her father is dying. She employs a disordered chronology that slightly disorients her reader, just as Jackson was disoriented. The effect is an evocative, lyrical work of musing and allegory rather than a scientific treatise. — Julia Jenkins, librarian and blogger at pagesofjulia, Shelf Awareness

Dr. M Jackson is a geographer, glaciologist, environmental educator, 2018 TED Global Fellow, and an Explorer for the National Geographic Society who researches and writes about glaciers and climate change worldwide. She’s worked for over a decade in the Arctic chronicling climate change and communities, guiding backcountry trips and exploring glacial systems. She is the author of The Secret Lives of Glaciers. Bill McKibben is an environmentalist, the author of The End of Nature, and the founder of 350.org. He also writes frequently for a wide variety of publications, including the New York Review of Books, National Geographic, and Rolling Stone. He lives in the mountains above Lake Champlain.