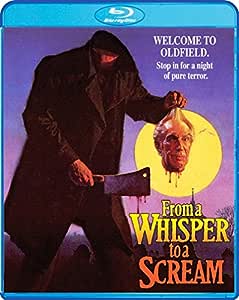 From A Whisper To A Scream [Blu-ray]


Prepare to be shocked out of your skin with four grisly tales of terror in one small town! Legendary king of horror Vincent Price gives "his fullest, most sepulchral tones of macabre camp", (Los Angeles Times) to this gruesome anthology that will haunt you for days!


On the night his niece is executed for committing a string of brutal killings, historian Julian White (Price) reveals the sinister secrets of her hometown, Oldfield, Tennessee, a horrific hamlet that spawns evil! But as the town’s murderous legacy is exposed with White’s chilling accounts: including stories of a necrophilic madman, a voodoo priest with life-prolonging powers and a legion of children with an appetite for flesh. White doesn’t realize that he is about the write the final chapter of Oldfield’s morbid history...in his own blood!

3.8 out of 5 stars
3.8 out of 5
80 global ratings
How are ratings calculated?
To calculate the overall star rating and percentage breakdown by star, we don’t use a simple average. Instead, our system considers things like how recent a review is and if the reviewer bought the item on Amazon. It also analyzes reviews to verify trustworthiness.
Top reviews

pattiJ
2.0 out of 5 stars Well, that was unpleasant
Reviewed in the United States on February 17, 2020
Verified Purchase
I watched this for Vincent Price. Not a shining moment for him.
Read more
8 people found this helpful
Helpful
Comment Report abuse

satisfiedcustomer
5.0 out of 5 stars Probably a zombie anthology in disguise; definitely, the uncomfortable spot of southern comfort!
Reviewed in the United States on October 6, 2019
Verified Purchase
A horror anthology with a mean- spirited, cautionary edge throughout. Although slightly disguised, this is essentially a zombie film. To my knowledge, the first of its kind in featuring some form of zombie or other throughout, except in the tie- in narrative. A movie event of sorts, an extravaganza or plethora if you will, in that it features cult, all- time favorites Clu Gulager, Rosalind Cash, Harry Caesar, Cameron Mitchell and none other than the greatest of them all, Vincent Price... I probably haven't seen that many, but this is second only to Creepshow in my book. A difficult act to follow, for Jeff Burr never again made anything nearly as good. The uncomfortable side of southern comfort, most definitely; very "blackened" stuff. For those of you who drink, maybe jack and coke would perform better than beer... Speaking of plethora, this particular release is loaded with extras; all of them great. Fifteen bucks is about fair for the deal!
Read more
3 people found this helpful
Helpful
Comment Report abuse

After the murderess Katherine White (Martine Beswick; Trancers II, Critters 4) is put to death, a journalist (Susan Tyrrell; Wizards, Digital Man) investigating her origins interviews Katherine’s uncle Julian White (Vincent Price; Theater of Blood, Scream and Scream Again). In this wraparound story, Julian explains that this small town in Tennessee has quite the history of murderers, and he educates the journalist on four such stories—each occurring further back in time.

In the first story we meet the awkward Stanley (Clu Gulager; Piranha 3D, The Willies, NOES 2: Freddy’s Revenge, The Initiation, Feast I-III, The Hidden), who is completely enamored with his lovely boss and has a curious co-dependence with his sister. When he finally gets his boss out on a date, things take a violent turn resulting in her death. But even in death, Stanley remains infatuated—and the consequences for his actions endure full-term.

We wind back the block for the second story as a 1950s man (Terry Kiser; Friday the 13th part VII, Weekend at Bernie’s) on the run stumbles across a voodoo practitioner and demands to learn his secrets. But in doing so, he finds a fate worse than death.

The third story takes us back yet further in time to a traveling carnival of the 1930s, when a local woman falls for a glass-eating carnival performer. The problem is the very jealous and voodoo-doll-savvy carnival owner (Rosalind Cash; Death Spa, Tales from the Hood, The Omega Man) doesn’t approve of this romance. The death scene is gloriously bloody with some of the best special effects of the movie.

The fourth story goes all the way back to the Civil War when some kids capture soldiers, mutilate them, and execute them in the name of their macabre magistrate (made from dead parents). This might have been the most satisfyingly gruesome of the segments.

Director Jeff Burr (Leatherface: TCM III, Puppet Master 4-5, Pumpkinhead II) landed in middle-of-the-road but still entertaining territory. There’s some macabre imagery, the zombie baby is pretty awesome (even if awesomely dumb), mystical carnies, and playing with voodoo dolls. So yeah, for its low budget, the movie relies on its zaniness a bit… but that worked for me.

Was this awesome? No, far from it. I’d call it passable 80s fare due to its diversity of effects shenanigans even if the execution was of low production value. But more than anything, what I appreciated in this anthology was that its stories all had a theme reinforced by the wraparound: the long and curiously murderous history of a small town.

Kimberly Moss
1.0 out of 5 stars I understand why Vincent Price regretted this.
Reviewed in the United States on April 3, 2020
Verified Purchase
I dislike, no, despise almost everything about this anthology. However, the second story is the one I preferred; it almost makes this watchable. The first is beyond disgusting, but slightly satisfying. While the third is actually the reason why I wholely regret watching this picture and the fourth is forgettable. I adore Vincent Price and admittedly, his presence (supporting character) was what attracted me to watch but the treatment of his role was ridiculous and dare I say disrespectful. Some of the performances are decent but others range too campy, with the third story and tie-in feeling unresolved and disappointing. Unfortunately, this was 99 minutes I can never get back.
Read more
One person found this helpful
Helpful
Comment Report abuse

E. Barney
2.0 out of 5 stars Anthology styled 80's horror
Reviewed in the United States on April 21, 2020
Verified Purchase
This movie is all over the place but it's not terrible and is a decent example of over the top 80's horror. The X-Ray Trivia sums up the problems here, though. Apparently Vincent Price was not a fan of the movie and told people that his agent tricked him into doing the movie and Price was then trapped by his contract. But reading on through the trivia you learn that Price was so impressed when the director approached and asked him to star in the film that Vincent readily agreed. Trying to wrap my head around those two statements, each presented as fact, was how a lot of this movie felt to watch.
Read more
Helpful
Comment Report abuse
See all reviews

r a price
3.0 out of 5 stars Only for die hard horror fans.
Reviewed in the United Kingdom on October 2, 2015
Verified Purchase
Although I usually like and enjoy anthology movies this one left me a little disappointed. It is only because Vincent Price is in it I will probably watch it again, with the emphasis on probably.
Read more
Report abuse

trmaxx
5.0 out of 5 stars excellent excellent bluray
Reviewed in the United Kingdom on July 27, 2015
Verified Purchase
This blu ray is brilliant in every way but is region A locked
Read more
Report abuse

Vladimir
5.0 out of 5 stars Five Stars
Reviewed in the United Kingdom on December 31, 2015
Verified Purchase
good edition to date, there is no better
Read more
Report abuse

Jon Wynne
3.0 out of 5 stars Has its moments...
Reviewed in Canada on November 17, 2017
Verified Purchase
I love horror anthologies, but this one isn't very good. Vincent Price was slumming. Some good moments, but some shamefully unnecessary ones as well.
Read more
Report abuse
See all reviews