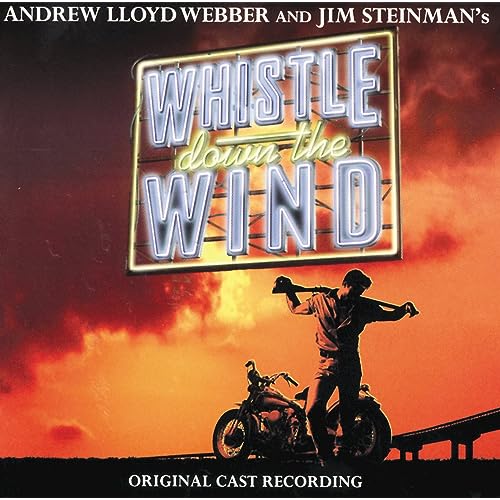 Whistle Down The Wind

4.3 out of 5 stars
4.3 out of 5
124 global ratings
How are ratings calculated?
To calculate the overall star rating and percentage breakdown by star, we don’t use a simple average. Instead, our system considers things like how recent a review is and if the reviewer bought the item on Amazon. It also analyzes reviews to verify trustworthiness.
Top reviews

K. Sullivan
4.0 out of 5 stars Tiresome southern accents but stunningly beautiful music
Reviewed in the United States on June 30, 2006
Verified Purchase
Stressing accents might seem like a silly or trivial thing, but when you are dealing with a musical CD that has quite a bit of dialogue, the accents do matter. And I have to say that they may be the most contrived southern accents I have ever heard. They give the impression of someone deliberately trying to do a bad southern accent. And the crime of it all is that the story does not rely upon the accents and setting to work. I understand we are supposed to be taken to 1950's Louisiana, but it would have worked for me whatever the landscape and year. Or if a case is made why it must be this era and locale, then I could have utilized my imagination. I am sure their natural accents would have been much more appealing to the ear (who doesn't enjoy a fine British accent?). All that being said, however, this musical is a tremendous accomplishment and well worth your investment.

The highlights of this play are the music and the vocal performances, particularly of the two leads. The story is actually rather weak in my opinion. In fairness, I have not seen the production so I am judging solely on the merits of the CD. Is the stranger the Christ or a murderous convict? Are the children naïve or are the adults jaded? Not only do I not know, but I do not much care. When listening to the music, you can actually disassociate it from the particular story being told and relate it to your own life or universal human experience. The best songs are expositions on the human experience rather than linked inextricably to the setting at hand. And the beautiful music, the thoughtful lyrics, and the wonderful performances make the experience powerfully moving.

"The Man" is played by Marcus Lovett. Those who have seen Lloyd Webber's birthday celebration at Royal Albert Hall will recognize him as the performer who played Judas in Superstar and introduced Sunset Boulevard. His voice is fantastic. His higher tenor register is so smooth. Beyond his vocal performance, he brings tremendous passion and emotion to the part. You feel his tortured past and his cynicism. His musings on the human condition in "Unsettled Scores" and "If Only" are truly powerful.

"Swallow" is played by Lottie Mayor. She sang the second version of this play's title song in the Royal Albert Hall Celebration mentioned above. Her voice is crystalline, pristine. It is simply beautiful. Whether she is singing a simple melody as in "Home by Now" or "If Only" or singing back-up harmony in "A Kiss is a Terrible Thing to Waste", her voice is exquisite.

Of all of Lloyd Webber's works, this one reminds me the most of Phantom, complete with recurring thematic elements and even a frenzied mob forming to catch the phantom, I mean, the convict. The story is not as good, but musically it compares very favorably. There are rousing gospel numbers ("Low", "The Vaults of Heaven"), crescendoing rock opera pieces ("A Kiss is a Terrible Thing to Waste", "Tire Tracks and Broken Hearts"), and simple beautiful melodies ("No Matter What", "It Just Doesn't Get Any Better Than This" - has there ever been a more beautiful 40 seconds?). It is unfortunate this work has not received the attention or accolades of the former. It is truly deserving.
Read more
4 people found this helpful
Helpful
Report abuse

Reviewer
3.0 out of 5 stars Good Music, Bad Swallow
Reviewed in the United States on July 31, 2007
Verified Purchase
When I saw Whistle Down the Wind on London's West End, I was amazed by the vocals with the exception of the man who played...well...The Man.

However, when I bought the soundtrack to the original cast (not the one I saw), I was very disappointed by the actress who plays the part of Swallow. Her voice has a very whiny, crying quality about it that is not intentional, and this is very noticeable as she sings. Her voice also does not fit the innocence of the 15-year-old lead, nor does it attempt to.

There is also a song on the soundtrack called Wrestle with the Devil, and one of the female soloists messes up badly with the lyrics: "He's anything he wants to be/but he's never WHAT HE SEEMS!" The female soloist screams hoarsely and accidentally, and I'm surprised that they did not try to redo the song or at least touch it up in the recording studio. I have to quickly turn down the volume every time I hear this part coming up.

The children in this musical are pretty impressive for their age, though they have a habit of belting everything, no matter how unnecessary (they did this when I saw it on stage too). When it comes to the song No Matter What, I haven't seen such a wussy attempt at hitting low notes since my high school tried to do Miss Saigon.

One song I thoroughly enjoy, however, is Tire Tracks and Broken Hearts. Candy has an unusual, sassy young voice, and Amos fits well with her. This song is incredibly catchy and is easily my favorite in the whole musical, though Cold is a close second.

The fake-Southern accents, however, made me cringe. This is proof most British people cannot do Southern accents. There is some speaking at the end of A Kiss Is A Terrible Thing to Waste that proves this:
Amos: What's in the package that's so important?
Swallow: Promise you wouldn't tay-yell. Say it! Promise you wouldn't tay-yell
Amos: Ah promise. Ah promise Ah wouldn't tay-yell.
The word "tay-yell" instead of "tell" made me cringe, and the accents were so blatantly obvious I'd rather if they dropped it.
Read more
2 people found this helpful
Helpful
Report abuse

Yaboingin
2.0 out of 5 stars MISSED OPORTUNITY
Reviewed in the United States on February 19, 2012
Verified Purchase
Years ago I saw the old black and white Haley Mills film on a rainy day and thought it was interesting, like an old little known British film from the 60s can be. I think the only way this could have had the right tone would be a more serious treatment like Next To Normal. You just can't go this Broadway with the theme of an outlaw hiding in the barn mistaken for Jesus by disturbed childrem. I saw a production of it and the performances were great but the material with the change in tone of the sub plots: i.e. inter-racial love in the 1950s, and struggling R&B singers, did not work. Some of the staging with the townspeople in the barn worked in making it a type of fable. I wish it had gone that way. It should have explored the more serious themes of grief, belief, and self delusion and stayed away from sub plots. There is a Kabuki theater of ALW musical cliches hitting you over the head and making you cringe throughout. That being said, some of the vocal performances and music are terrific.
Read more
Helpful
Report abuse
See all reviews

sheila wraights.a.wraight
5.0 out of 5 stars A Breath Of Fresh Southern Air !!!!!!!!!!
Reviewed in the United Kingdom on May 22, 2017
Verified Purchase
This is a breath of fresh air Jim steinmans lyrics work really well with LLoyd Webbers unusuallly southern american score, all the songs are amazing I just wish it was longer more like a 3 disc it needs, dramatic weight which I think would be gained by and a few more songs and some Dialogue to help the listener better understand the story, like The Woman In White and Stephen Ward because unless you watched the film or read up on it online or watched it on stage, you might like me get a little bit lost if you just listen to the recording but that aside its a must for any Webber fan infact any fan of musicals.
Read more
One person found this helpful
Report abuse

CaroleA
4.0 out of 5 stars An Impressive cd - so pleased I bought it
Reviewed in the United Kingdom on May 19, 2010
Verified Purchase
Having been to see the current tour of 'Whistle Down the Wind' which I really loved, much to my surprise as I had gone to see Jonathon Ansell and knew little of the show itself.As there was no other recording available I thought I would get this original cast recording and I am so glad I did. I just love it, especially the way it includes some dialogue as well which helps bring the songs to life and I can close my eyes and its as if I am watching it again. The opening song 'The Keys to the Vaults of Heaven' sets the scene and the music just gets better and confirms that the show is much more than 'No matter what' which I really enjoy too- the children sing it beautifully. I still wish it was an a recording of the current show but its a great listen all the same.
Read more
Report abuse

Adrian Drew
4.0 out of 5 stars An impressive show nicely recorded.
Reviewed in the United Kingdom on April 24, 2017
Verified Purchase
A solid recording of an underrated musical that never had the success of "Phantom" but still had many positive aspects. Removing the location to America reduced some of the emotional intimacy but brought with it other commercial advantages. Recommended.
Read more
One person found this helpful
Report abuse

Mrs P
5.0 out of 5 stars Really good CD
Reviewed in the United Kingdom on March 23, 2014
Verified Purchase
Excellent CD. Recorded with spoken lines, not just songs, which enabled me follow the whole story accurately, which I didn't fully know. Good songs and singers; highlighted vocalists have to be the deep tones of Walter Herron Reynolds III who plays Edward and the menacing tones of the Snake Preacher sung by Christopher Howard. A really good buy
Read more
Report abuse