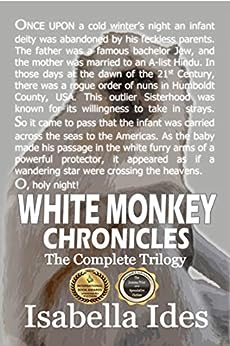 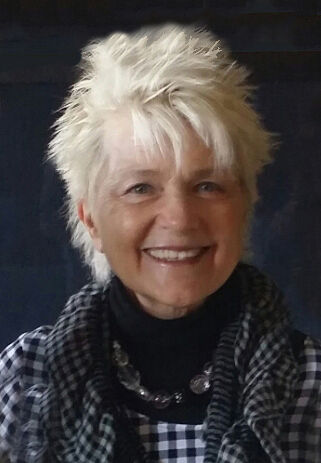 Heaven's Hope: Isabella Ides' White Monkey Chronicles
An air of mystical eternity permeates northern California's Humboldt County. It's not just the heady aroma of eucalyptus or the mist-shrouded sun floating silent over rolling hills at dawn. A pervasive spirit of ageless magic breathes soulful mantras beneath the surface of Humboldt's every nook and cranny, vista and shady grove, day and night. Small wonder that Dallas-based playwright and author Isabella Ides set her majestic work, White Monkey Chronicles: The Complete Trilogy, an original fable of transformation, hope and renewal, there. Where it belongs.
"Perhaps the most mind-altering of the many under-examined metaphysical axioms on the etheric shuttle is the proposition that Earth is the hope of heaven. Stop. Repeat.Earth is the hope of heaven."

Scintillating, sweeping, and sophisticated, this miraculous tale careens in kaleidoscopic, galaxy-spinning turns. White Monkey Chronicles reveals author Isabella Ides as a self-assured, equal-opportunity paradigm demolition expert. Storming entrenched temples of orthodoxy, shattering icons, upending conventions--the eponymous monkey blinks his eyes and worlds shake, spin backwards, endure cataclysmic transgression and collide, exploding with ineffable joy.
Many beloved films emerge from critically acclaimed books. Ides reversed the process, developed her tale as performance art first, allowing it to emerge chrysalis-like after, in fully blown narrative form. What results is a work that vibrates in a detailed, sensuous and often sensual reality, where every facet, character and transition demonstrates a vividness drawn from the tactile stage. Plot arcs rise, resonate and resolve with ferocious dramatic intensity. It's hard to put the book down. Impossible to not fall in love with the eccentric, flawed, passionate, sometimes human and often godly characters, even the evil ones.
"Sister Merry Berry's heart went boom when Luce crossed the room to fill her cup...She knew that beautiful bad boy right off. He could have struck a match on the rock of her unreason, the moment was that combustible...."I see you've been enjoying the wines in our cellar. I have to ask: Did you or did you not also help yourself to Mother Mary Extraordinary's prayers?""
The trilogy's jubilant resolution will win readers' hearts. When Sister Merry Berry fires up her pink 1959 Cadillac Eldorado Biarritz convertible, top down, in preparation for heavenly ascent, readers will aspire to hitch a ride with the unrepentant bohemian, relishing the mind-expanding experience the transit promises.
"Hear me out," Roica lifted her chin. "When my breath was torn to rags, I turned my ship around, defeated down to my boots and headed homeward - and there was my answer. I saw how close the angels linger to the Earth. Look," he turned her around. "One tiny planet haloed in light. Even angels look to the Earth for love."

White Monkey Chronicles is a book to cherish, to quote, to re-read, to laugh and weep over. Share it aloud with family and friends on chill winter's eve, most certainly in Humboldt County and realms beyond.
Alexandra Bonifield criticalrant@outlook.com
Posted on 13 April 2018, criticalrant.com/2018/04/13/heavens-hope-isabella-ides-white-monkey-chronicles/

Eclectic Reader
5.0 out of 5 stars Wonderful Literary Achievement
Reviewed in the United States on September 9, 2018
Verified Purchase
This is a literary achievement of the highest order, beautifully written and exquisitely plotted. It’s filled with wordplay, humor, and a playful feminist sensibility that upends the established myths of our mythical world. The cast of characters bubbles with intrigue, satire, and originality. The plot thins and thickens around a series of conflicts between the old and the new, the good and the evil, and the pleasantly undefinable. Among other things, we get a new take on Lucifer, a monkey god with the power to morph into an invincible warrior, and a bevy of bird-like cardinals who can’t see beyond their own selfish beaks. The tale takes us from an orphanage in Humboldt County, run by a truly extraordinary order of nuns, to a celestial homeland where gods and angels play and replay the creation myth in a seemingly endless quest to get it right. It ends with a beginning but the beginning is certainly not the end. Wonderful debut novel. Must read.
Read more
15 people found this helpful
Helpful
Report abuse

Amanda Holguin
5.0 out of 5 stars Everything you could possibly want in a book.
Reviewed in the United States on March 4, 2019
Verified Purchase
I cannot say enough good things about this book. I laughed out loud through most of the book, while throughly enjoying these complex characters who stole my heart in many ways. I read this book twice because I felt once wasn’t enough and Im so glad I did. It was an amazing book and the second time reading it was even better.
Read more
15 people found this helpful
Helpful
Report abuse

billc@greenbuilder.com
5.0 out of 5 stars This book is so visual and fun it ought to be a movie.
Reviewed in the United States on December 25, 2018
Verified Purchase
Loved the book. A much appreciated departure from the daily grind.

Intensely original story with surprises throughout. An enlightened romp. There's sly social commentary, poetic prose, angels, a Lucifer, an amazing monkey, flawed humans with interesting, quirky superpowers... some truly beautiful scenes that are so descriptive, so painterly, the whole book is begging to be made into a movie.

The Cardinals (and all the other bird-men of their order) are fascinating villains except it's an oversimplification to call them that. The Sisters are wonderfully kind, clever and hard simultaneously. Both groups are depicted with fondness and hilarious detail by the author. And of course the protagonist stands in for every one of us, as we all awaken, trying to understand how the world works, and how we make our way in it.
Read more
11 people found this helpful
Helpful
Report abuse

Galileo
5.0 out of 5 stars Rogue order of nuns, what's not to like?
Reviewed in the United States on August 25, 2018
Verified Purchase
Gosh, I loved this novel, a tender-hearted story of three crazy nuns raising a foundling, the love child of an A-list Hindu deity and a "famous bachelor Jew." Lucifer is entirely misunderstood, simply jealous that his older twin (the Creator) gets all the attention, but his wings set the stage for GMDs (genetically modified divinities). Incarnations and avatars abound, humans try to keep up. A mash-up of Douglas Adams's Hitchhiker's Guide, Monty Python's wordplay, maybe Alice in Wonderland and every creation myth you've ever heard. Love this.
Read more
9 people found this helpful
Helpful
Report abuse

Sandra
5.0 out of 5 stars I am reviewing this for a second time.
Reviewed in the United States on October 27, 2020
Verified Purchase
Isabella Ides' book lept into my lap unexpectedly. I had no clue how it found me, but as I read the few lines offered on my e-book I pressed the "purchase" button without a second thought. I inhaled the book. Slowly. Sometimes not so slowly. Lovingly! Oh so lovingly. I wished it would never end. I wished the words would go on and on and on. I loved it so much, I could not bring myself to read anything fictional afterwards, I could not put down White Monkey Chronicles in my mind, I could not leave Conrad, Skipper- I just couldn't find anything as wonderfully well-written, laughter inducing and heart opening. I am hungry for the language written in this book, I am hungry for the words and the playfulness and the awesome construction of this masterpiece!

I ended up reading it again. Well, what else could I expect. I cannot find it's match, so I found IT. I understand that this book has pierced my heart with cupids arrow, and that I am likely blinded in love! I would love for everyone to read it! Such wisdom! Such fun! Such love! I read it twice in under six months. And Isabella Ides', all I have to say to you, is THANK YOU. Thank you for putting pen to paper. The world is better for it. I cannot predict the future, but if I could, I would see myself opening this book on page one sometime out there, finding the monkey's blink and fall deeply in love all over again.

You have my deepest appreciation for your divine work. May it make the way into many hears, and shake many souls and fill countless bellies with laughter.
Read more
2 people found this helpful
Helpful
Report abuse

I am inspired by creatives such as George Lucas and JK Rowing, and I now add Isabella Ides into that elite group.

In a society that chooses words such as “bae” & “fleek” as place holders for language that people over 30 years of age might understand, I find Isabella’s writing in White Monkey Chronicles utterly refreshing. Her superlative use of the English language is only one of the ways her creative mind will entrance. Her delve into the mystery of how we imagine and create the divine is mind-blowing!

Admittedly, I initially found Isabella’s brilliance and writing style a bit intimidating, but I accepted the challenge. And once Conrad Eppler was introduced, the ride got wild in the most delightful way. My escape into the White Monkey Chronicles is a journey I needed to take and a place that I will revisit. It is thought provoking, intelligent, fascinatingly imaginative, and in a category of its own for originality.

I could say so much more about this trilogy, but I choose to end with this: I will never, ever see a 1959 Cadillac Eldorado Biarritz convertible again without thanking Sister Merry Berry for allowing me to ride with her.
Read more
6 people found this helpful
Helpful
Report abuse

Don Hall
5.0 out of 5 stars A joy to read!
Reviewed in the United States on March 4, 2018
Verified Purchase
I have been a fan of Isabella’s poetry and plays for quite some time. So, I was delighted to see that she had written a novel. I was not disappointed, it’s wonderful! It reads as lyrically as her poetry and is a joy to read. In the interesting times we live in, exscape into this fanciful world.
Read more
8 people found this helpful
Helpful
Report abuse

Kat Kramer
5.0 out of 5 stars Best in awhile!
Reviewed in the United States on June 11, 2021
Verified Purchase
I wish I had found this book when I was many years younger. I've gotten an old brain, but this story had me working hard to brighten the corners therein. Thank you, Isabella Ides, for a fantastic read!
Read more
One person found this helpful
Helpful
Report abuse
See all reviews

Tags that will help you discover similar books. 4 tags
science fiction & fantasymetaphysical & visionarygenre fictionmagical realism
Results for:
Page 1 of 1Start overPage 1 of 1
Previous page
Next page
Where do clickable book tags come from?
Book tags are created from a variety of sources, some of which are customer-generated. Amazon is not legally responsible for the accuracy of the tags represented. If you are an author or publisher and would like to remove a tag associated with your title, please contact your vendor manager or publisher support team.
Back to top
Get to Know Us
Make Money with Us
Amazon Payment Products
Let Us Help You
EnglishChoose a language for shopping. United StatesChoose a country/region for shopping.
© 1996-2021, Amazon.com, Inc. or its affiliates