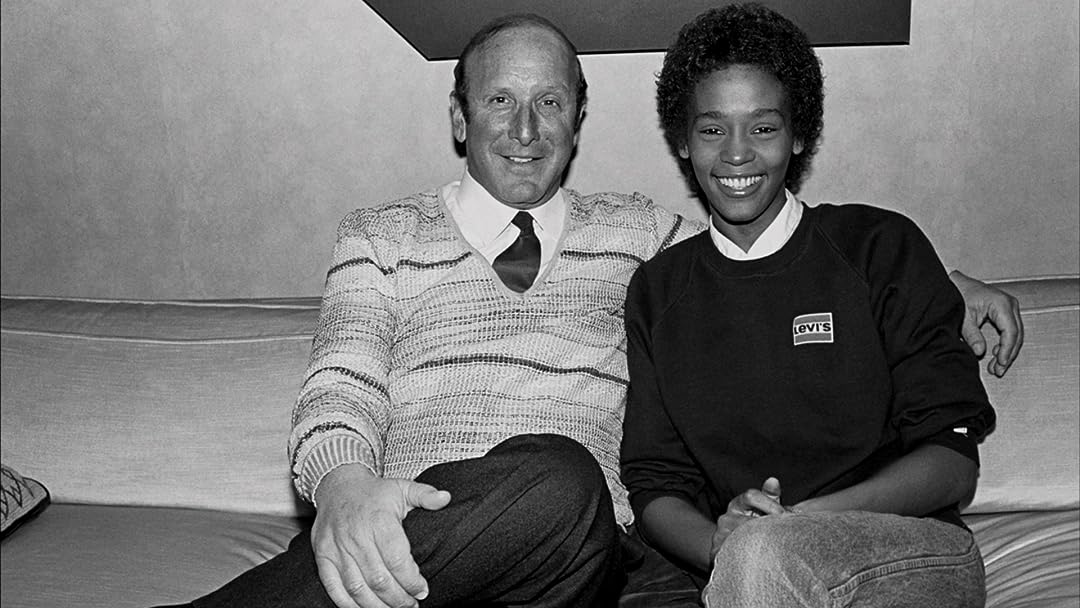 (1,347)7.32h2018R
An intimate, unflinching portrait of Whitney Houston and her family that probes beyond familiar tabloid headlines and sheds new light on the spellbinding trajectory of Houston’s life. Oscar®-winning filmmaker Kevin Macdonald unravels the mystery behind “The Voice,” who thrilled millions even as she struggled to make peace with her own troubled past.

RHGReviewed in the United States on March 12, 2019
5.0 out of 5 stars
Some surprising facts that explain many things
Verified purchase
Well, although Ms. Houston has been roasted on the grill for her chemical dependency issues, her codependent relationship with Bobby Brown, etc. I found the following facts to be very explanatory of what happened in her life:
Imagine the following, if you had her life:
1.) You are left on your own with others to care for you for most of your childhood instead of your parents
2.) You are naturally very religious, love church and consider it your second home, and your Mom has an affair with your pastor
3.) You are sexually abused by an adult female relative, and thus are too afraid to disclose, and it subsequently causes you to question your sexuality, leading possibly to a lesbian relationship later on, and guilt that you think the abuse was your fault.
4.) Al Sharpton calls you "Whitey Houston" because you are not singing "black enough"
5.) You are booed loudly at the BET awards, again for not singing "black enough"
6.) Your brothers give you marijuana and cocaine for a 16th birthday present.
7.) You love your daughter, but have no idea regarding parenting, neither does your spouse, so you screw up on that, and try to fix it, but it's too late.
8.) Your own Father steals a ton of money from you, then sues you for a million dollars because he thinks you owe him
9.) Most people around you are hangers-on, relatives who can only make their living from you, and people who do not have your best interests in mind
10) The record label pushes you to tour when EVERYONE including your manager, things you are not in a good place to do that, and that it will only be a disaster.
11) You are one of the greatest singers ever to live, with all of the attendant fame, pressure, problems, incessant touring, that that requires. People covet that lifestyle....they shouldn't, it's not what they think it is.
12.) Your husband consistently cheats on you and abuses you. You probably take it because you feel you don't deserve any better. You think everything is your fault. This is very common among survivors of child sexual abuse.

After all of that, who WOULDN'T want the relief of drugs and alcohol just to be away from the pain, sorrow, pressure, failure, and guilt that you would feel, all documented ad nauseam on every rag sheet in every store in the world. It's surprising to me that she survived as long as she did. She had the face, voice, and, I believe, heart of an angel. Best voice I believe I will ever hear in my lifetime. RIP Whitney, many of us think only the best for you and have only empathy for the struggles in your life. None of us are perfect, and for one will never judge you. Your music still shines light into my soul. Thank you for sharing your gift with the world.

Mark S. CrawfordReviewed in the United States on November 3, 2018
5.0 out of 5 stars
You Can't Serve Two Masters
Verified purchase
This is by far one of the best documentaries about a performer. The stories, details, and revelations, as well as the high production value, make for an emotional telling that will move you. Be prepared to hear things you’ve never heard before! Many years have passed since Whitney first hit the charts, but watching her early videos and performance clips quickly remind us what an amazing voice she had. With that voice she would interpret a song to the point where you would forget the original version! However, as the saying goes, everything that glitters is not gold . . .

Even though this is about Whitney’s life, how many times have we now seen this story play out – Elvis, Michael, Prince. Who’s next? There is a lesson that artists’ families, friends, management, and fans can learn from Whitney and the others: Just because someone is talented, famous, and rich, does not automatically mean they’re capable of making the best career and life decisions. In fact, it seems that all success does is accentuate their demons. Whitney’s own brother said “When you don’t resolve things; when you don’t deal with things, they never go away.”

In the end, it seemed Whitney was being pulled in many directions. Her fans wanted her, her hanger-ons needed her, and her addictions distracted her. It was obviously difficult to serve so many and it finally overwhelmed her. Whitney fans will, of course, want to see this. I also recommend it to the casual fan, and to those thinking about pursuing a career in the entertainment business. This is a powerful documentary.

I Corinthians 15:33
57 people found this helpful

Amy M.Reviewed in the United States on October 28, 2018
4.0 out of 5 stars
New revelations
Verified purchase
I was afraid this film would whitewash a lot of the issues that Whitney had because it was produced by the Whitney Houston estate, but they didn’t do that. Most of the things discussed in the film I already knew being a lifelong Whitney fan. There were quite a few new photos and videos that I had never seen before as well as new interviews with people I hadn’t heard from. The new revelations in the film included the fact that Cissy Houston had an affair with the pastor of their church when Whitney was younger and that Whitney resented her mother and that Whitney and her brother Gary were allegedly molested by their cousin DeeDee Warwick. She was the sister of Dione Warwick. If you’re a Whitney fan I think you’ll enjoy this film. She was such a talented singer and it’s still so sad she’s gone.
34 people found this helpful

NYChicReviewed in the United States on February 18, 2019
5.0 out of 5 stars
Un-Believe-Able
Verified purchase
I will be honest, WHILE I was born in 84; I didn’t come to know Whitney until after her glory years. I was in primary school during the years she married B.Brown, had her child, and start in the body guard. By the time the gossip magazines was buzzing with stories of her drug use I was a teen. I recall her reality TV and actually loved it and saw nothing wrong with it. I remember her daughter being in the mouth of gossip blogs and magazine. I knew more about the infamous Whitney in her later years so it was refreshing to see her beginning and rise to the top. I saw another version some time ago on Netflix and that was good but it didn’t included the fact that that she and he brother was sexually abused by a family member. Now that was some interesting but sad facts.
12 people found this helpful

cdsdReviewed in the United States on October 19, 2018
3.0 out of 5 stars
Whitney Houston Fan
Verified purchase
There wasn't anything surprising or new for me to see in this film because I am and was a Whitney Houston Fan. If you have already followed her in life and death; there isn't anything surprising or shocking. The film is okay and worth watching if you're a fan.
17 people found this helpful

R Lynn, Los Angeles,CAReviewed in the United States on November 9, 2018
2.0 out of 5 stars
Not What I Expected
Verified purchase
This documentary did not add anything spectacular to the story of Whitney Houston. The film played for short time in the Los Angeles area before it was taken out of theaters, but the family's request, I imagine, and one had to wait for it to be released on DVD before you could see why. Nothing in the documentary was interesting. If you want to see a better doc on Whitney, see the Showtime, "Whitney: Can I Be Me?", which is more detailed and specific accounts on the singers life that are interesting and inclusive of the people who actually worked with, knew and loved the performer.
14 people found this helpful

DACKACReviewed in the United States on November 10, 2018
5.0 out of 5 stars
Disservice to an amazing talent. The incomparable Whitney Houston.
Verified purchase
Terrible representation of the greatest singer and one of the world’s most beautiful women. This is not a respectable depiction of the person that I have watched for the past 33 years. Any true Whitney fan who watched this knows that parts are out of sequence and that they left out chunks of her career. However, I’ll take any opportunity to get a glimpse of that face and to hear the sound of the voice. I don’t know how anybody could think that this piece of crap is worthy of an Oscar, but I hope it gets nominated and wins just to keep Whitney visible. This is Whitney at her worst so come on Pat Houston give us a live DVD of Whitney at her best. We’ve waited long enough.
10 people found this helpful

Amazon CustomerReviewed in the United States on May 12, 2019
5.0 out of 5 stars
Powerful - really powerful
Verified purchase
After 30 years of listening to Whitney's songs - watching this and seeing the clips from her early concerts before Bobby and seeing more clips after Bobby - you could really see that though she loved singing and performing - somehow - she was overexposed and you could see the step by step descent to self destruction -
I found myself getting angry with some of her handlers - but once the whole family was on the gravy train - no one knew how to get off.
I had the impression that she trashed her vocal cords on purpose to have a perpetual excuse of why she couldn't tour anymore.
The last scenes and last interviews were truly sad - a woman going around drinking alcohol all hours of the day and telling people, "I've got to get my s***t together so I can go see Jesus, I need to go see Jesus." Then in a drunken haze singing "Yes Jesus Loves me" and then overdosing - really affected me - this made a deep impression on me -
The movie is worth seeing - in that the interviews conducted with those who spent one on one time with her - was a side I had not heard of or ever saw -
One person found this helpful
See all reviews
Back to top
Get to Know Us
Make Money with Us
Amazon Payment Products
Let Us Help You
EnglishChoose a language for shopping. United StatesChoose a country/region for shopping.
© 1996-2021, Amazon.com, Inc. or its affiliates