Who Said I Was Up For Adoption? and millions of other books are available for Amazon Kindle. Learn more 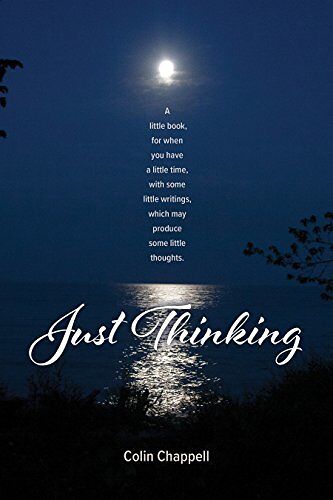 Who Said I Was Up For Adoption?: A story about one calculating dog...and one unsuspecting human Paperback – May 10, 2016

by Colin Chappell (Author)
4.7 out of 5 stars 10 ratings
See all formats and editions
Sorry, there was a problem loading this page. Try again.

Is there any expression of FRIENDSHIP as endearing as a dog voluntarily touching its nose to yours?
When Colin Chappell contemplated the idea of adopting a dog, he did so warily, for he had seldom spent time with dogs and one of his primary canine experiences came when he was bitten by a German Shepherd at age fourteen. He certainly was unprepared for the complexities of caring for the seventy-five pounds of rescued, furry attitude he encountered in Ray. But perhaps what he was even more unprepared for were the emotions he would feel once Ray invited him to be his friend.
Who Said I Was Up For Adoption? tells the evolving story of this adoption (though it remains unclear just who did the adopting). Funny, heartwarming, and emotional, Colin and Ray's story is really two stories, for part of learning to let an adopted dog into one's life is learning to see from a perspective other than your own. True to that knowledge the book is narrated from parallel, alternating viewpoints-Colin's and ... Ray's!
All net profits from sales of Who Said I Was Up For Adoption? will be donated to the Oakville and Milton Humane Society, a remarkable organization that rescues and rehabilitates dogs (and many other creatures) and matches them with suitable, loving humans.
Read more
Previous page
Next page

Having always held a soft spot for the proverbial "underdog", Colin supports a number of charities that focus on homeless youth, those suffering from emotional and mental abuse, and those recovering from sexual exploitation; he has also volunteered in a hospital-based Crisis Intervention Unit where his role was to befriend, assess, and advise- perhaps the perfect training ground for pet adoption.
Ray happily shares his home with Colin in Oakville, Ontario, Canada along with Colin's partner, Carol, just a few minutes' walk from his favorite park. The ongoing adventures of Colin and Ray can be enjoyed by following them at: www.meandray.com.

Start reading Who Said I Was Up For Adoption? on your Kindle in under a minute.

He was not socialized; had no house training; was afraid of anything that moved; lunged and barked without warning; did not like to be touched, and had an attitude. He did, however, meet my criteria in size! Being a German Shepherd/Rottweiler X at 75 lbs, he was most certainly a large dog! Ray was my first dog, and &quot;Who Said I was up for Adoption?&quot; covers the emotional roller coaster of our first 18 months together!

My second book &quot;Just Thinking&quot;, is a collection of simple (I get confused easily!) verses about life in general. It is my sincere hope that readers will be able to relate to the manner in which I wrote them. If a piece was emotional to me, I would hope that it could also be emotional to them. If I have incorporated situations or circumstances which I found thought-provoking, it is hoped that they would also be encouraged to pause and ponder.

My third book was co-authored and is called &quot;The Odessa Chronicles&quot;. It is pure fun fiction, with a lot of life messages, and is recommended for children ages 4 to 104! Just imagine a Barn Owl with an attitude (Odessa), who accidentally meets a Jackalope (Jaxon), who accidentally meets a cat (Dewey) whose life is eating and sleeping. The three of them are all looking for a home ... and they find one, in a barn at an old disused farm.

Now imagine a human (Joshua) who is retiring and looking forward to a life of peace and tranquility on a little farm. You can guess which farm he purchases, and his life will never be the same.

Whether it be a true doggy story, life poetry, or some fun fiction ... enjoy!

Carolyn
5.0 out of 5 stars The Unbreakable Bond!
Reviewed in the United States on May 21, 2016
Verified Purchase
"A dog leaves paw prints on the heart that last forever!" This heartwarming story of the bond created between a German Shepherd and the owner he chose will keep you turning the pages. It will make you cry; for did you know that dogs can sob? And it will make you laugh, Houdini is no match for Ray! Most of all it will make you fall in love with a German Shepherd who was given a second chance at life, thanks to a very patient and caring human, Colin. If you are a dog lover you will want to add this book to your collection! And if not a dog lover, you may just change your mind after reading this!! Find out what you are missing!
Read more
One person found this helpful
Helpful
Report abuse

Kate
5.0 out of 5 stars Wonderful story with a happy ending!
Reviewed in the United States on June 18, 2016
Verified Purchase
This is the story of the connection between an antisocial, sad stray dog and a human who had no clue what he was getting into. It’s a fun and interesting read. The dog is 75 lbs. of determination and strength that can be quite a challenge. As the story is told you can see the connection, cautious at first, continue to form a firm bond. The stories are funny, sad and some are heart breaking. It’s a must read for any dog person especially if you’ve rescued one. Even if you don’t have a dog (I don’t), it will tug at your heart strings.
Read more
Helpful
Report abuse

celticlass
3.0 out of 5 stars Not crazy about writing style
Reviewed in the United States on March 2, 2019
Verified Purchase
Love it when “Ray” speaks and essentially clarifies Colin’s last narrative. Don’t get me wrong, Colin is educational and thorough, but Ray is entertaining as well as informative.

Sign me off as a dog mom who “can bark.”
Read more
Helpful
Report abuse

P. Wight
5.0 out of 5 stars Heartwarming and Sincere
Reviewed in the United States on June 25, 2017
Verified Purchase
What a wonderful story about a man and a dog 'finding' each other and, yes, rescuing each other in different ways. Being a dog lover myself, I immediately melted into this book of a man who was once afraid of dogs, yet agreed to rescue a dog who'd been neglected and probably mistreated before taken to an adoption center. This story of how a man and dog learn to read each other's signals, to understand each other, and then love each other, is heart-warming and sincere.
Read more
Helpful
Report abuse

Amy S
5.0 out of 5 stars Success Story to Grip Your Heart
Reviewed in the United States on May 22, 2016
Verified Purchase
Wonderful story of a 1st time dog owner being willing to learn and do whatever it takes to help an unsocialized dog reach his potential as a cherished family pet. It is told through the eyes of both the person and the do I have followed his blog for about a year and Ray (the dog) continues to learn and improve, as does his family!
Read more
One person found this helpful
Helpful
Report abuse

Tracey Tavares
5.0 out of 5 stars Five Stars
Reviewed in the United States on August 18, 2017
Verified Purchase
I love the story in this book.
Read more
Helpful
Report abuse