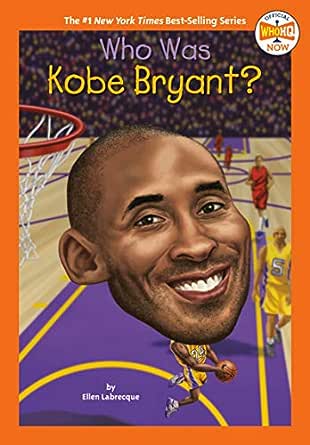 You've subscribed to Who HQ NOW! We will preorder your items within 24 hours of when they become available. When new books are released, we'll charge your default payment method for the lowest price available during the pre-order period.
Update your device or payment method, cancel individual pre-orders or your subscription at
Your Memberships & Subscriptions 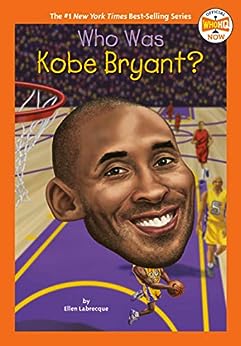 Who Was Kobe Bryant? (Who HQ NOW) Kindle Edition 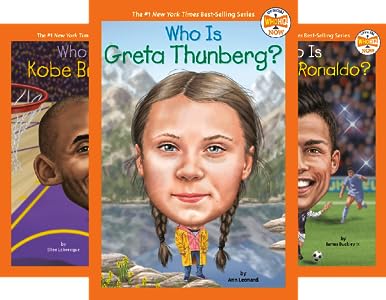 Who Was Kobe Bryant?

It was June 26, 1996, the night of the National Basketball Association—-the NBA—-draft, when professional teams select new players. Wearing a dark suit on his slim six--foot, six--inch frame, Kobe Bryant, seventeen, was waiting for his name to be called. Just days earlier, Kobe had graduated from Lower Merion High School outside of Philadelphia, Pennsylvania. He was considered the best high--school basketball player in the nation. High--school players usually went to college to prepare themselves for entering the NBA draft. Kobe was different. He wanted to become a professional right away.

“Playing in the NBA has been my dream since I was three,” Kobe said.

The Philadelphia 76ers—-Kobe’s hometown team—-had the first pick in the draft. They chose Allen Iverson from Georgetown University. The first twelve teams all chose college players. Finally, the Charlotte Hornets selected Kobe with the thirteenth pick.

Once his name was announced, Kobe put on a Hornets baseball cap before he walked to the podium to greet the TV cameras.

Kobe, though, would never play one minute for the Hornets. Even as he smiled in front of the cameras, Charlotte was already talking with the Los Angeles Lakers about trading Kobe for an experienced center, Vlade Divac. The Hornets, with number thirteen, had a much higher pick than the Lakers, who had the twenty--fourth selection. Charlotte chose somebody who would be a valuable trade for Los Angeles. The Hornets already had all--stars who played shooting guard, Kobe’s position. They wanted someone like the seven-foot-one-inch-tall Divac.

Kobe was grinning on the outside, but the details of the draft would stick with him. The fact that twelve—-really thirteen—-teams had passed on him would fuel his drive to be the best for the next twenty years.

Kobe did become one of the NBA’s greatest players of all time. He won five NBA titles, led the league in scoring two times, and was an eighteen--time All--Star.

But on the day of the 1996 NBA draft, seventeen--year--old Kobe still had his whole career in front of him—-and he was ready to play.

Kobe Bryant was born on August 23, 1978, in Philadelphia, Pennsylvania. His first name came from a type of Japanese beef that his parents had noticed on a restaurant menu. Kobe’s mom, Pamela, said later they always knew their son would be special, and that is why they choose that unique name. Kobe’s dad, Joe Bryant, was a professional basketball player for the 76ers.

When Kobe was three, he loved to watch his dad play on television. While he watched, Kobe would often run down the hallway, jump onto a mini trampoline, and slam a ball into an eight--foot--high plastic hoop.

When Kobe was six, his dad’s basketball career changed his family’s lives. Joe had played for eight seasons and had been traded to two different teams. In 1983, he moved his whole family to Rieti, Italy, so he could play basketball there. Rieti is a small city fifty miles from Rome.

The Bryant family did not know how to speak Italian at first. Kobe had two older sisters, Sharia and Shaya, and they spent afternoons teaching each other the language. Eventually Kobe spoke Italian as well as he spoke English.

Joe’s team had its own youth squad that Kobe joined. Despite being so young, Kobe’s skills stood out right away. His talent might have come from his dad, but his personality came from his mother. Pam was the stern one in the family. Kobe hardly ever smiled when he played. “He was always so serious about everything he did as far as sports,” said his sister Sharia.

Kobe’s father switched teams every few years while playing in Italy. No matter where they moved, Kobe always found a place to play basketball.

Kobe’s grandfather, Grandpa Cox, still lived in the United States. He recorded NBA games on his television, boxed up the tapes, and sent them to his grandson. Kobe watched the games again and again. He studied the moves of NBA players like Michael Jordan of the Chicago Bulls. Then he would go to the courts near his house and practice those moves for hours at a time.

In November 1991, when Kobe was thirteen, his family returned to Philadelphia. He was back in his home country, but he felt like an outsider. He didn’t understand American slang. He didn’t know what clothes were cool to wear. Kobe didn’t blend in with the kids at school. He took the anger he felt about being an outsider, and he used it on the basketball court.

The year after he returned to the United States, Kobe attended Lower Merion High School. He started on the varsity basketball team as a freshman and spent every free second practicing. In addition to his high--school team, Kobe played on an Amateur Athletic Union (AAU) team. They played against all--star teams from all over the country. During the summer, Kobe attended top basketball camps and faced other great players. He began to stand out, even among the best.

Kobe “worked harder than any other kid I’ve ever seen,” said Sam Rines, one of Kobe’s coaches.

By the time Kobe was a senior, he was considered to be the best high--school player in the entire country.

During his senior season, Kobe led Lower Merion to a state--championship title and averaged more than thirty points and twelve rebounds per game. Almost every college basketball team in the country recruited him.

On April 29, 1996, Kobe held a news conference in his high--school gym. Photographers, writers, teammates, and friends surrounded him. Everybody wanted to hear Kobe’s decision. He announced, “I’ve decided to skip college and take my talent to the NBA.” The crowd erupted in cheers. Kobe flashed a bright grin.


Chapter 2
Welcome to the Show

Less than a month after Kobe joined the Los Angeles Lakers, Shaquille O’Neal left the Orlando Magic and also signed with the Lakers. Standing at seven feet, one inch and weighing more than three hundred pounds, Shaq was the most dominating center in the world.

Kobe’s first season in the NBA (1996–-1997) was a learning experience. He was much younger than his teammates. This made it difficult for him to fit in with them. When they traveled, he sat quietly on the plane, watching movies or reading. He spent a lot of time alone in his hotel room, ordering room service and watching other NBA games. In the playoffs, the Lakers were losing three games to one against the Utah Jazz in the second round of a best-of-seven-game series. If the Lakers lost Game Five, their season was finished.

The game was tied 87–-87 with eleven seconds to go. Kobe took the Lakers’ final shot—-it was an air ball, a completely missed shot. The game went into overtime, and things only got worse for Kobe. He shot three more air balls, and his team lost. The Lakers’ season was over.

The team flew home from Utah to California that night. His teammates were disappointed and exhausted. But Kobe was already planning for the next season. The moment he stepped off the plane, he drove to a high school down the street from his house. A janitor opened the gym for him. Kobe shot baskets all night. When the sun came up, he kept shooting. He never wanted to let down his teammates or his fans again.

Kobe spent the entire off--season working to improve. He played in the Lakers’ summer league, lifted weights, worked with a trainer, and shot baskets endlessly. His hard work paid off. In his second season, he became the youngest player ever to start in the NBA All--Star game. During the game, he played against his idol, Michael Jordan. He challenged Michael, but he also asked him for advice and tips. Michael treated him like a little brother.

In Kobe’s third season (1998–-1999), he started every game and became the Lakers’ second--leading scorer (behind Shaq). He also became a great defensive player by studying his opponents. At times, it seemed like Kobe knew what move a player was going to make before the player did.

During Kobe’s fourth season, he and Shaquille led the Lakers to the 2000 NBA title. The Lakers had a new coach named Phil Jackson. Phil had coached Michael Jordan in Chicago, and he brought out the best in both Shaq’s and Kobe’s games. Under Phil, the Lakers repeated as champions the following season, in 2001. Kobe also married his girlfriend, Vanessa Laine, that spring.

The Lakers won a third title in 2002. Kobe and Shaquille were the perfect combination together on the court. Kobe was an awesome shooter from the outside and could beat any defender when he drove to the basket. He made dunks that were so high--flying and acrobatic that it looked like he was performing an Olympic gymnastics routine. Shaq was an unstoppable force underneath the hoop. His dunks rattled the backboards.

With every championship, though, the relationship between Kobe and Shaq became more complicated. They were teammates, but they were also rivals. Now that Kobe was a superstar, he didn’t want to share the spotlight, or the ball, with another teammate. Kobe didn’t want to play with Shaq anymore. --This text refers to the paperback edition.

Ellen Labrecque is a former Senior Editor for Sports Illustrated for Kids and the author of over twenty nonfiction books for young readers, including biographies of Jim Thorpe and Magic Johnson. --This text refers to the paperback edition.