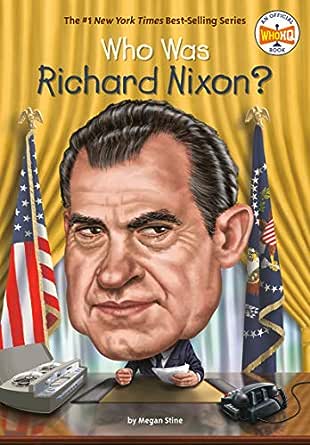 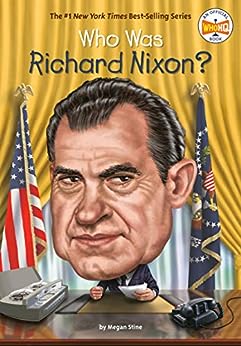 Who Was Richard Nixon? (Who Was?) Kindle Edition

Megan Stine has written several books for young readers, including Where Is the White House?, What Was the Age of the Dinosaurs?, Who Was Ulysses S. Grant?, Who Is Michelle Obama?, and Who Was Sally Ride? She lives in Clinton, Connecticut. --This text refers to the paperback edition.

Who Was Richard Nixon?


On August 8, 1974, the most powerful man in the world was crying. President Richard Nixon was about to go on TV. At nine o’clock that night, he was going to announce to the nation that he would resign from the presidency. He had been caught in a terrible scandal. Congress was talking about putting him on trial. There was even a chance he could go to prison.

Nixon had spent his whole life trying to be strong, bold, and brave. He said he never cried—not in public or in private. He never even let his wife or children see his emotions. But now he was crying so much, the makeup person could hardly get him ready for television.

Just two years earlier, Richard Nixon had been reelected as president in a landslide victory. He won in every single state except Massachusetts. What had happened since then to make a president leave the White House in disgrace?

The answer is the story of Watergate—a scandal that rocked the nation. It is a story of spying and wiretapping—and then covering it all up with money and lies. It is a story about men who committed serious crimes in order to win an election.

But most of all, it is the tragic story of one man—Richard Nixon—who wanted to be good and wanted to achieve great things for America but somehow lost his way.


Richard Milhous Nixon was born on January 9, 1913, on a small farm in Yorba Linda, California. His mother, Hannah, was very strict. She didn’t think it was right to drink alcohol, dance, or swear. All his life, Richard would call his mother a saint. But she was a quiet, cold woman who never showed her children much affection.

Richard’s father, Frank, was the opposite. Frank Nixon had never gone to high school. He was a loud man who bullied his sons. But he loved to discuss politics with young Richard.

Richard had four brothers. Two of them died young from illnesses. Richard, the second oldest, was extremely smart. His teachers skipped him ahead from first grade to third.

He also loved music from an early age. He took piano and violin lessons, and he later learned to play the clarinet, saxophone, and accordion.

When the family farm failed, the Nixons moved to Whittier, California. Richard was nine at the time. His father opened a gas station and grocery store in town. Every day before school, Richard had to get up at four to buy vegetables for the store.

In high school, Richard got excellent grades. He tried hard to fit in. But he was shy, clumsy, and not very popular.

The one thing Richard excelled at was public speaking. He was a star of the debate team. In a debate two people take opposing sides in discussing an important issue. He also had a part in the school play.

After high school, Richard was accepted at one of the best colleges in the country—Harvard University. But his family couldn’t afford it. So Richard stayed home and attended Whittier College instead. The students from the richest families belonged to a club called the Franklin Society. When Richard tried to join it, the Franklins rejected him.

Hurt by being snubbed, Richard formed his own club. In those days, black students were almost never accepted in clubs run by white students. But Richard’s club made sure everyone was welcome.

After graduation, Richard got a full scholarship to attend Duke University School of Law in North Carolina. The beautiful buildings on campus looked like castles to him. He didn’t live in a fancy dorm, though. He lived in a shack with no heat and no bathroom!

Richard had to work hard in law school. And he graduated in the top of his class.

Nevertheless, when he went to New York City to apply for a job, all the best law firms turned him down. Why? He hadn’t gone to an Ivy League school—like Harvard or Yale. Once again, Richard was being snubbed. He never got over how it felt to be rejected by one group and then another.

In 1937, Richard went home to Whittier and fell into a slump. Now what? How could a smart young man make a name for himself if no one would give him a chance?


Richard Nixon was a fighter at heart, so pretty soon he was back on his feet. Nixon believed that it didn’t matter how many times he got knocked down. What mattered was getting up again.

He got a job at a law firm in Whittier. In a little more than a year, he was a partner with his name on the door. He became well known in town and well respected.

For fun, he got involved with an amateur theater group. One day, he saw a beautiful redhead named Pat Ryan. Richard fell in love with her and asked her out on a date.

“You shouldn’t say that,” Richard joked, “because someday I am going to marry you!”

Pat just laughed. She kept turning him down. But he wouldn’t give up. In time, they started dating. Sure enough, on June 21, 1940, they were married.

In December of the next year, the Japanese bombed Pearl Harbor, Hawaii. It meant that the United States was going to war.

Richard and Pat Nixon moved to Washington, DC. He had lined up a job working for the government. But after eight months, Richard Nixon wanted to do more than just sit at a desk. He wanted to help the United States win World War II.

So Richard joined the Navy as an officer. Eventually, he was sent to an island in the South Pacific. His job was to take care of supplies for bomber pilots.

He was good at his job. He even managed to get some extra supplies for the men. Nixon set up a hamburger stand with free beer and burgers. His nickname was “Nick” Nixon, so he called it Nick’s Hamburger Stand. (Later, Richard would be called “Dick” by all who knew him.)

As a boy, Richard had never drunk liquor, smoked, or used curse words. And he certainly didn’t bet on card games. But in the Navy, he was no longer so strict with himself. He began to swear like the other men. He drank a little. And he became so good at poker, he won thousands of dollars.

A few weeks later, Richard got a letter from an important businessman back home. Would Richard like to come back to California and run for Congress as a Republican?

Of course he would! Richard loved politics. Here was a good place to start. That was, if Pat agreed. And she did.

Once back in California, Richard worked hard to learn everything about politics. He also took advice from Murray Chotiner, a political adviser. Chotiner told Richard to get “dirt”—embarrassing information—on his opponent, Jerry Voorhis. Richard couldn’t find any dirt on Voorhis, so he bent the truth instead. When he debated Voorhis, Richard twisted the facts to make it sound like Voorhis was in favor of things he was actually against. It was a sneaky, underhanded way to win the debate.

In February, after the Nixons’ first daughter, Tricia, was born, Pat plunged into the campaign. She attended almost every rally.

On November 5, 1946, Richard was elected to Congress. He later wrote that he and Pat were happier about this victory than they would ever be again in his whole career. --This text refers to the paperback edition.