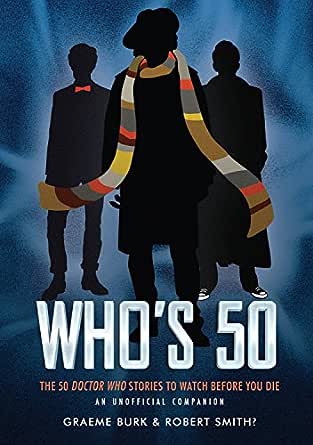 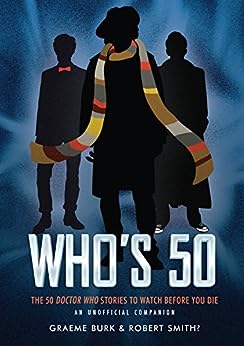 Who's 50: The 50 Doctor Who Stories to Watch Before You Die Kindle Edition

“Damn you, Burk and Smith. I have just lost four hours to your blasted book. And I only meant to glance at it. It is nightmarishly more-ish.”  —Neil Gaiman on Who Is the Doctor

"Well-argued and considered and persuasive enough to keep you reading just that little bit more."  —Doctor Who Magazine on Who Is the Doctor

"The most intelligent and lively book I have read about Doctor Who. It deserves to be a big hit not only with the fans but also to viewers new to the show." —Philip Hinchcliffe, Producer of Doctor Who 1974-1977

"Who's 50 is like being thrown the keys to the TARDIS with a temporal map to visit all those not-to-be-missed adventures in time and space." —Phil Ford, Doctor Who writer and executive producer of The Sarah Jane Adventures and Wizards Vs. Aliens

"Who’s 50 gets a solid and very respectable 4 out of 5 so put it on your list of books to grab as you celebrate the 50th anniversary of the Doctor’s travels through time and space." —C.W. Beuchler Online

"This book's full of intriguing, well-argued opinions and it's a delight to wallow in them. This is strongest when the authors are going against received wisdom or disagreeing with each other."
—Finn Clark's Reviews --This text refers to an alternate kindle_edition edition.

Graeme Burk is a freelance writer who has written for magazines, small presses, and websites in Canada and Britain. He is a past finalist for a Writers Guild of Canada award for new screenwriters.
Robert Smith? is a biomathematics professor at the University of Ottawa. He achieved international media attention for a mathematical model of a zombie outbreak. Together, they are the co-authors of Who Is The Doctor (2012). Both live in Ottawa, Ontario.

Steve Ivanovics
5.0 out of 5 stars A Doctor Who must.
Reviewed in the United States on May 26, 2015
Verified Purchase
The best book for the Who's fiftieth. It taught me in detail all about the main stories of the main episodes, even those which I haven't gotten to see, and I still want to see them. Plus, plenty of background info. Can't wait for the 100th.
Read more
One person found this helpful
Helpful
Comment Report abuse

Omega60Top Contributor: Star Wars
3.0 out of 5 stars More for the beginner Who fan.
Reviewed in the United States on March 6, 2014
Verified Purchase
Have to say that this feels more like a book written just to make some dough off the Doc's fiftieth anniversary than anything else. As a long time Who fan, I was mystified at some of their choices, and annoyed at others. But these are the personal choices of the authors and if you took 100 Who fans, you'd likely get 100 different lists. I would have liked it a bit straight forward and could have lived without the snarky comments by the authors at the end of each review. Some interesting stuff, but nothing I haven't read before.
Read more
3 people found this helpful
Helpful
Comment Report abuse

Señor Spook
5.0 out of 5 stars Essential companion volume for a massive series
Reviewed in the United States on March 9, 2015
Despite appearances, “Who’s 50” is an invaluable resource, and not simply a cash-grab riding on the coattails of one of television’s most popular (and longest running) shows.

If you’re new to ‘Who and don’t know where to begin, you’ll want this in order to get caught up. Likewise, if you’re already a dedicated modern ‘Who fan, you’ll want this for backstory. “Doctor Who“ is a massive series — 813 episodes (252 stories / 35 combined seasons) as of this writing. This book is a fantastic guide for anyone itching to dive into a decades-long, twisty-turny history that ofttimes presents itself as intimidating and impenetrable.

“Who’s 50” is a little light on coverage of the modern (post-2005) programme, but the selections from the classic era (1963 - 1989) are extensively covered. As a holdover from its ‘60s heritage, “Doctor Who” has always been fairly newby-friendly; you can jump into the show at practically any point and very quickly understand it. But if you stick with it you’ll eventually get a bit curious about the show’s history, and that’s where this book comes in handy. Moreover, the authors are — more often than not — spot-on with their choices; a supposition confirmed by a back cover endorsement from no less an authority than legendary 1970’s ‘Who producer, Philip Hinchcliffe, himself.

thewritersjourney
4.0 out of 5 stars An important volume for fans of both the classic and the new series
Reviewed in the United States on January 14, 2014
Doctor Who is an institution, a television program that transcends television. Its immense popularity increases with each regeneration, but at fifty years old it is a daunting task to immerse one’s self into the entirety of the universe. Authors Graeme Burk and Robert Smith? seek to help the newcomers to Doctor Who lore in Who’s 50: The 50 Doctor Who Stories To Watch Before You Die. With so many of these stories available on DVD (check your local library) or Netflix, it’s quite simple to catch up on the most important events of the Doctor’s television run.

Though the front cover only shows silhouettes of Tom Baker, David Tennant, and Matt Smith, all of the incarnations of the Doctor are represented in the book. Burk and Smith? examine each of these stories with a critical eye that a true fan should appreciate. They do not hide their love for the characters, yet are not afraid to point out shortcomings in the writing or acting in particular episodes. This is a book written for fans by fans, and the passion of the authors is evident.

An important volume for fans of both the classic and the new series, if you want an in-depth discussion of Doctor Who episodes throughout the decades, Who’s 50 is definitely your go-to guide.
Read more
2 people found this helpful
Helpful
Comment Report abuse

Janet
4.0 out of 5 stars I've Never Seen Dr. Who
Reviewed in the United States on October 7, 2013
As I had never seen a Dr. Who Episode, I thought I'd see what all the hoopla was about. This excellent reference book should please Dr. Who fans, and quite possibly bring in some new fans. It has an interesting compilation of stories from the 50 years of Dr. Who. It would serve as a good guide through the many Doctors and their escapades. It deserves a place in any Dr. Who lover's library.
*I received my copy from NetGalley.com in exchange for an honest review.
Off to start watching.....I've got a lot of catching up to do.
Read more
Helpful
Comment Report abuse
See all reviews

Meows
5.0 out of 5 stars This is just Great
Reviewed in Canada on January 2, 2014
Verified Purchase
I love this - it is a great guide to episodes that sound amazing (seen some of them, not others). I like that it gives a synopsis and a bit of a background, and some fun facts! Really neat if you are a fan of the show!
Read more
Report abuse

Dave
5.0 out of 5 stars Buy It!
Reviewed in the United Kingdom on November 29, 2014
Verified Purchase
Great read! Very helpful for this new fan of Doctor Who, particularly the classic era.
Read more
Report abuse
See all reviews