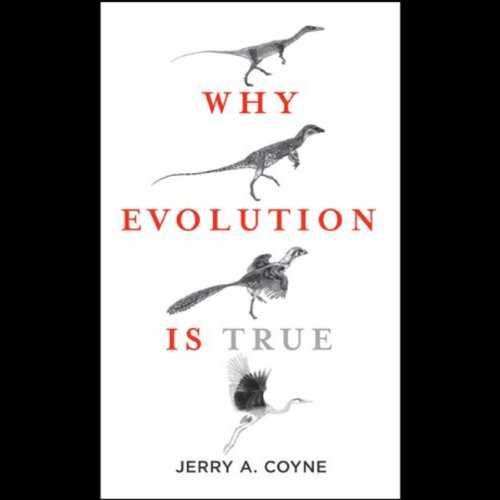 Why Evolution Is True

Jerry A. Coyne (Author), Victor Bevine (Narrator), Audible Studios (Publisher) & 0 more
4.6 out of 5 stars 966 ratings
See all formats and editions
Sorry, there was a problem loading this page. Try again.
Why evolution is more than just a theory: it is a fact

In all the current highly publicized debates about creationism and its descendant "intelligent design," there is an element of the controversy that is rarely mentioned-the evidence, the empirical truth of evolution by natural selection. Even Richard Dawkins and Stephen Jay Gould, while extolling the beauty of evolution and examining case studies, have not focused on the evidence itself. Yet the proof is vast, varied, and magnificent, drawn from many different fields of science. Scientists are observing species splitting into two and are finding more and more fossils capturing change in the past-dinosaurs that have sprouted feathers, fish that have grown limbs.

Why Evolution Is True weaves together the many threads of modern work in genetics, paleontology, geology, molecular biology, and anatomy that demonstrate the "indelible stamp" of the processes first proposed by Darwin. In crisp, lucid prose accessible to a wide audience, Why Evolution Is True dispels common misunderstandings and fears about evolution and clearly confirms that this amazing process of change has been firmly established as a scientific truth.

Special invitation from Audible!
Learn more about Membership
List Price: $19.95
You Save: $1.96 (10%)
By completing your purchase, you agree to Audible’s Conditions Of Use
Sold and delivered by Audible, an Amazon company
Share

4.6 out of 5 stars
4.6 out of 5
966 global ratings
How are ratings calculated?
To calculate the overall star rating and percentage breakdown by star, we don’t use a simple average. Instead, our system considers things like how recent a review is and if the reviewer bought the item on Amazon. It also analyzes reviews to verify trustworthiness.

M. Chapman
2.0 out of 5 stars Some of the best arguments are outdated or questioned by current science
Reviewed in the United States on July 29, 2019
Verified Purchase
If you are like me and honestly researching the subject of evolution (intelligent or no intelligent design), no matter where the truth leads you it probably not best to start here for an evolutionary perspective unless you want to understand historical arguments that have evolved or fallen to the wayside.

After researching many compelling arguments I too often found that science now questioned the author's argument or the assumptions were more biased than the author admitted. Case in point, he argued that retroviruses are parasitic devices that alter DNA and that they had done so in the same places in chimpanzees and in humans. The argument being for a common ancestor, because the probability that this occurred in both the human and chimpanzee independently is improbable and that a creator would have no reason to do so as it produced 'junk DNA.' Now science has found that this 'junk DNA' has governing functions within our genome. Now the argument could be turned around as a testament to design.

To be fair, some contrary evidence to his arguments probably did not exist at the time. However, he did not even try to present a fair and opposing viewpoint to most of his arguments.

Truly, it can be hard finding critical thinkers (attempts to be unbiased, fair and balanced) on either side of the evolutionary argument. Is it too much to ask for an author who is secure enough in their position (or not...honesty is good) to present both sides of the evolutionary argument and admit when they do not have a good answer to strong arguments that oppose their viewpoint. How about two respected, unsensational and opposing view science trained authors write a book together!!! I'd pay for that.
Read more
50 people found this helpful
Helpful
Report abuse

Patrick S
5.0 out of 5 stars A Must-Read for the Curious and the Cynical
Reviewed in the United States on August 24, 2017
Verified Purchase
This was a masterpiece - concise yet comprehensive, and very interesting. Even though I majored in a science (chemistry) when I was in university, I learned a great deal. Dr. Coyne makes an unassailable case for the validity of the Theory of Evolution, supporting his statements with evidence from a variety of scientific disciplines. I must add that you definitely don't have to be a scientist to understand it. I'm going to keep this book as my primary reference when I encounter deniers of evolution.
Read more
33 people found this helpful
Helpful
Report abuse

Tiana Nicole Scott
4.0 out of 5 stars Great book with many intriguing points, but it can get a bit rant-like!
Reviewed in the United States on January 13, 2018
Verified Purchase
I had to buy this for my college evolution class. I am a Christian who believes evolution is true. Yes, we do exist! Some of the diehard Christians would say I'm not actually Christian for this, but who's to say our Creator did not enable us to evolve? Regardless, that's a whole different argument, but I just wanted to point out that my review is from the point of view of a Christian who believes in evolution.

As a whole, I did really like this book. He makes many good points and backs up his points with interesting evidence, some of which I wasn't even aware of, despite being a science student. I found out about midway through my class that I didn't really need to buy this book since my professor would go over the key topics of certain chapters of this book that he wanted to discuss, but I would still find myself reading the chapters myself because I found all the little stories and such that he includes to be very interesting. Normally, like most other college students, if I don't HAVE to read the chapters, I won't! But yet I did with this book. My professor really liked this book as well, though, of course, he got his degree in evolutionary sciences and is friends with Jerry Coyne.

The only thing I was opposed to in this book is that sometimes he does go on tangent-like ramblings, usually whenever he was directly trying to discredit Christianity. Not creationism, but Christianity. These rants weren't very often though and can be ignored, but as a Christian it was a bit off-putting. I can perfectly well understand discrediting creationism, but discrediting a whole religion is a bit much, especially when there are others like me who are Christians who believe in evolution. In fact, there was a good number of Christians in my evolution class who had such beliefs.

Nevertheless, if you can ignore his tangents like I did(which is the only reason I didn't rate this 5 stars - I would rate it 4.5 stars), then you'll find this book to be a very good read!
Read more
20 people found this helpful
Helpful
Report abuse
See all reviews

When Belief Dies
5.0 out of 5 stars IMO - this book is at the cole face of atheistic apologetics
Reviewed in the United Kingdom on March 1, 2019
Verified Purchase
Well - this just changed my life.

I read and study the Bible daily. It tells us that we were created special, but evolution tells us that is a lie. At least in the classic religious belief that we are special.

Jerry A. Coyne is a brilliant author, he writes in a very accessible way and is very clear at informing his reader when he is talking about things he knows to be correct, and when he is speculating.

I genuinely believe that this book is one of a few books, along with others like 'Sapiens: A Brief History of Humankind' by Yuval Noah Harari, which is at the cole face of atheistic apologetics.

In the past, if you wanted to challenge Christianity the attack would always be aimed at God or the resurrection of Jesus. Very little work has been done within a religious framework into the scientific beginning of the galaxy and life on our planet. But how can it? Religion aims at purpose and meaning, not origins and biology.

This book aims to inform the modern reader about evolution. It does that beautifully. It also raises its head time and time again to critique and question Creationists or people who believe in Intelligent Design.

Belief should be able to withstand questions, big or small. We don't need answers to flow immediately, rather we need to be able to explore, understand and consider faith against the pieces of evidence that science brings to bear.

I believe we should all hold doubt within our lives. Anyone who thinks they hold the complete answers to everything is holding a very dangerous state of mind.

'The whole problem with the world is that fools and fanatics are always so certain of themselves, but wiser people so full of doubts.' - Bertrand Russell
Read more
13 people found this helpful
Report abuse

Amazon Customer
5.0 out of 5 stars Excellent introduction to evolutionary theory
Reviewed in the United Kingdom on July 28, 2020
Verified Purchase
I thoroughly recommend this book as a brilliant introduction to evolutionary theory. Written in clear English which neither dumbs down the subject nor patronises the reader I could have read it in one go if I'd had the time. What I like most is that although an introduction, the author doesn't skim over the subject, providing enough depth and examples to amply prove his point. As someone addicted to watching David Attenborough documentaries, I felt that I already had a decent background in evolution, but this book both cemented and added to my knowledge. A great read!
Read more
One person found this helpful
Report abuse

Mike Mancott
4.0 out of 5 stars Four Stars
Reviewed in the United Kingdom on June 27, 2017
Verified Purchase
A good stimulating read for those brought up in Sunday School to believe in the Creation story.
Read more
2 people found this helpful
Report abuse

J. Oliver
5.0 out of 5 stars Well written.
Reviewed in the United Kingdom on September 12, 2018
Verified Purchase
Read as part of Evo Bio course. Wouldn't have gone for it otherwise as the entire book is geared towards trying to convince Creationists they are wrong, a pointless endeavour in my opinion.
Still lots of interest and well written.
Read more
One person found this helpful
Report abuse
See all reviews
Back to top
Get to Know Us
Make Money with Us
Amazon Payment Products
Let Us Help You
EnglishChoose a language for shopping. United StatesChoose a country/region for shopping.
© 1996-2021, Amazon.com, Inc. or its affiliates