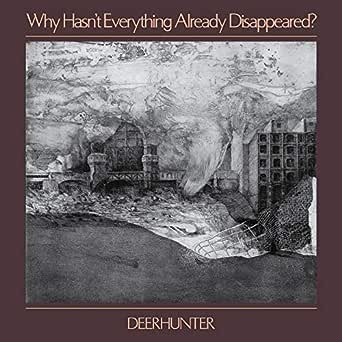 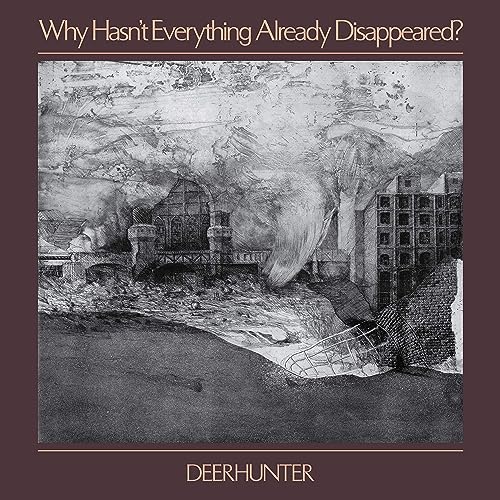 Why Hasn't Everything Already Disappeared?

4.6 out of 5 stars
4.6 out of 5
70 global ratings
How are ratings calculated?
To calculate the overall star rating and percentage breakdown by star, we don’t use a simple average. Instead, our system considers things like how recent a review is and if the reviewer bought the item on Amazon. It also analyzes reviews to verify trustworthiness.
Top reviews

tenaciousmcd
5.0 out of 5 stars Hope This Album Hasn't Already Disappeared
Reviewed in the United States on March 27, 2019
Verified Purchase
This is a really great record, Deerhunter in peak form. It doesn't rock as hard as Monomania or achieve the indie pop perfection of Halcyon Digest, but it does have its own ample charms. In some ways, it reminds me of Berlin-era Bowie in its catchy, brainy, experimental, sexually fluid, Brit rock (via Atlanta) vibe. The first half of the record is the more readily accessible, with songs like "Death in Midsummer," "Element" (the record's best track), and "What Happens to People?", all of which could have been radio hits in a different era; the instrumental "Greenpoint Gothic" is also beautifully realized. The second half gets weirder, with more instrumentals and the strange computer-dystopia drone of "Detournement," which sounds like it came from an early 80s nerds-in-danger movie soundtrack. But the album stays strong through the haunting closer, "Nocturne." I'm not sure why this hasn't performed as well commercially as previous Deerhunter material. This is what rock music sounds like when it's still got some ambition.
Read more
5 people found this helpful
Helpful
Comment Report abuse

tstarkmi
5.0 out of 5 stars A Little Less Focused
Reviewed in the United States on January 28, 2019
Verified Purchase
This album sounds more experimental and less focused than recent Deerhunter albums... where Monomania stayed the line, this album seems to stray a bit... for the incredible songs 'Death In Midsummer', 'Greenpoint Gothic', and 'Element', I'll give it five yellow stars. Bradford continues to push his musical vision in new directions.... some of it doesn't work, but when it does, it really does.
Read more
5 people found this helpful
Helpful
Comment Report abuse

Michael Kramer
5.0 out of 5 stars The Best American Band Performing Today
Reviewed in the United States on February 6, 2019
Verified Purchase
A return to the greatness of Halcyon Digest. This is the best rock and roll band in the workd today. The best music gets deeper with every listen and If you stick with “Disaappeared” it will make its way to your heart. “Nocturne” may be their best song yet.
Read more
3 people found this helpful
Helpful
Comment Report abuse

Michael J Luft
5.0 out of 5 stars Great vinyl quality, good album if you like modern Deerhunter
Reviewed in the United States on February 26, 2020
Verified Purchase
Vinyl quality is great. No issues.

A very underrated Deerhunter album. If you are a fan of the music they have released over the past 6 years or so you will probably like it as it sounds more mainstream, perhaps the most mainstream one to date. Fans of 2000's Deerhunter will probably not like this at all.

Ramin D.
3.0 out of 5 stars 3.5 star effort still worthy 17 years on
Reviewed in the United States on February 2, 2019
Most indie rock groups who have been around 17+ tumultuous years would struggle to release an album that's better than just good this late into their career, but not Deerhunter! In fact, four years following "Fading Frontier" (their weakest effort), this is a big step up. Mind you, I'm one of many Deerhunter fans who staunchly believes they hit their magnificent peak during a prolific two-year period (2008-10) that saw them put out three full albums and an EP that culminated in 2010's out-of-this-world "Halcyon Digest." While the band slowed down in output thereafter, I actually very much enjoyed their ramshackle approach to 2013's "Monomania," which seemed to have lost them a few fans who were expecting a dream pop followup and instead got a slab of aggression verging on punk. Alas, Deerhunter then seemingly rushed to release "Fading Frontier," a dull followup record of pure acquiescence to those they may have alienated with "Monomania." I'd be hard pressed to rate that one any higher than 2.5 stars.

"Why Hasn't Everything Already Disappeared?" is a definite return-to-form, even if it doesn't come close to the 5-star ethereal jaw-dropper that was "Halcyon Digest." For one thing, this is the most diverse platter of songs Deerhunter has put together since then, recalling that album's sonic variety and adding even more instruments to the mix. Heck, the guys even brought along a harpsichord (!) to pepper the proceedings. Some critics have consequently likened this to a Kinks record. I personally find that a bit of a stretch, although I agree that this might be their most European-sounding effort to date. To me, though, that has more to do with a track or two that dip into icy synthesized sounds reminiscent of the late 70s London band Tubeway Army and lyrics that often visit England, Russia, and other European locales. While some may bemoan the album's bleak lyrics (fading away, death, and destruction are very much central themes here), I give Deerhunter huge credit for juxtaposing such heavy subject matter with highly warm and melodious arrangements and production values that keep them the alluring artists they remain after all these years.

Their next move remains anyone's guess.

Paul D. Sandor
5.0 out of 5 stars Deerhunter and the album's last stand
Reviewed in the United States on March 31, 2019
I love Deerhunter. I love albums (vinyl, CDS etc.)

Deerhunter's music is served well by albums: a collection of music from a time and place that is meant to be played together. Deerhunter's sound is at times mysterious, alluring, raw, powerful, melodic and unpredictable (sometimes all in the same song!)

With the lack of attention for Deerhunter's latest, "Why Hasn't Everything Already Disappeared", I fear the recorded album and certain genres of music are on life support.

Back to the album: Like all Deerhunter records, this one stands alone. It is different and it is excellent. The sound surrounds the listener... From the opening strolling notes from an army of instruments on the opener, Death In Midsummer to the escaping words on the closer, Nocturne, one can feel their senses tested.

I'd describe the sound of the record as an American band playing British invasion psych pop that has never been imagined. The standout track for me is "What Happens to People." It has a bit of 70's Bowie mixed with The Smiths and Belle and Sebastian. But then again, guitarists/singers Bradford Cox and Lockett Pundt make the past their own.
Their best albums, Microcastle and Halcyon Digest swirled around in the mist like a dream. This one is cleaner and concise and in your face.

If you're a fan, please listen to this record. Deerhunter deserves to live on even if the record album dies.

P.S. My love of albums can be best expressed by the CDS I listened to on a recent road trip: The journey began on Abbey Road; next, The Dark Side of the Moon; minutes later, The Queen is dead and I couldn't have been happier; at a rest stop, I stared into a screen and said, "Ok Computer." If this means nothing to you, well, nevermind!
Read more
3 people found this helpful
Helpful
Comment Report abuse
See all reviews

Egg Orton
5.0 out of 5 stars A World of Its Own
Reviewed in the United Kingdom on April 3, 2019
Verified Purchase
Best Deerhunter for ages, beguiling and world weary makes for a beautiful upbeat, sometimes defiant, melancholia.
Read more
2 people found this helpful
Report abuse

pearceygalore
5.0 out of 5 stars Incredible opening track.
Reviewed in the United Kingdom on February 28, 2019
Verified Purchase
Great album, hard to top the opening track though, Death in Midsummer - it's such a strong number.
I'd recommend if you like psychedelic tinged, guitar music.
Read more
Report abuse

Mrs Susan R Allan
5.0 out of 5 stars Brilliant cd
Reviewed in the United Kingdom on March 12, 2019
Verified Purchase
This was a great cd.
Read more
One person found this helpful
Report abuse

middleagedude
5.0 out of 5 stars Aging well.
Reviewed in Canada on February 17, 2019
Verified Purchase
Great album from a great band. These guys have released nothing but quality records, this one does not disappoint.
Read more
Report abuse