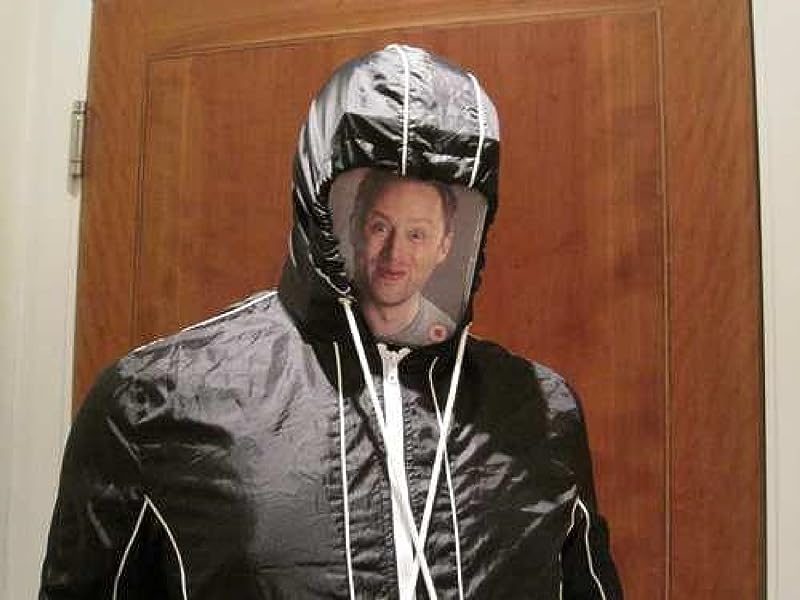 "This book should be required reading for anyone asked to contribute a quote." - Emo Philips, stand-up comedian

"I imagine James Thomas's brain as a sort of beehive: thoughts come and go in a seemingly random, almost bumbling fashion―but the yield is pure honey. I will not apologize for that joke, but his are much better." ―Michael McKean, comedian, writer, and star of This Is Spinal Tap, Best in Show, and Better Call Saul

"Packed with great jokes and funny ideas, this book will release enough endorphins that you can give up running and sex. I am not a doctor." ―Simon Blackwell, executive producer and Emmy Award–winning writer of Veep, Peep Show, and In the Loop

"Stop watching TV, read a book. Then put that down and read THIS book." ―Michael Kupperman, cartoonist, illustrator, and author of Tales Designed to Thrizzle

"Jim has a truly original, quirky and charming voice, and he makes me laugh out loud on a daily basis on Twitter. I frequently thank my son for introducing me to Crimer Show." ―Rebecca Front, BAFTA award-winning actress and star of The Thick of It

"Smart and hilarious." ―The Irish Times

"The perfect anecdote to all of the sad and terrible news and information with which we are pummelled on a daily basis." ―Popmatters

JAMES THOMAS, aka Astonishing Sod to his multitudinous Twitter followers, achieved Internet fame with the success of Crimer Show, an episodic parody of TV crime dramas. Since then he's devoted every waking moment to his quest to write the Stupidest Sentence Ever Written. Thomas is a regular contributor to The New Yorker and The Huffington Post, and Why the Long Joke? is his first book. He lives in Dublin.
Tell the Publisher!
I'd like to read this book on Kindle

4.8 out of 5 stars
4.8 out of 5
5 customer ratings
How does Amazon calculate star ratings?
Amazon calculates a product’s star ratings based on a machine learned model instead of a raw data average. The model takes into account factors including the age of a rating, whether the ratings are from verified purchasers, and factors that establish reviewer trustworthiness.
Top Reviews

Barry
5.0 out of 5 stars It's like a walk through the mind of someone who is ...
Reviewed in the United States on March 16, 2017
Verified Purchase
This book is not your normal joke book.

It's like a walk through the mind of someone who is constantly thinking clever, funny things.

It's never boring. If you like this, I encourage you to Google him and find everything he's written.

Michelle Foose
5.0 out of 5 stars If you like "Crimer" you will love this
Reviewed in the United States on March 23, 2016
Six pages into this book (Kindle Edition) and my stomach already hurts from laughing so hard! It is silly, hilarious, odd, and oddly original. If you like "Crimer" you will love this. If you haven't heard of "Crimer" you are missing out. If you enjoy it 1/3 as much as I do, you will more than get your money's worth!
Read more
3 people found this helpful
Helpful
Comment Report abuse

Scott Rettig
4.0 out of 5 stars Steal this book!
Reviewed in the United States on June 4, 2016
The cover is a disturbing shade of green and has a picture of a talking bird on it. Clearly the author is deranged.
Read more
One person found this helpful
Helpful
Comment Report abuse
See all reviews from the United States

Christine Thompson
5.0 out of 5 stars This book saved 2016 from being a total disaster.
Reviewed in the United Kingdom on December 17, 2016
Verified Purchase
This book is a work of pure genius - every time I pick it up I smile. Everyone should have a copy - you will not be disappointed.
Read more
Helpful
Sending feedback...
Thank you for your feedback.
Sorry, we failed to record your vote. Please try again
Report abuse

Amazon Customer
5.0 out of 5 stars Bizarre and hilarious
Reviewed in the United Kingdom on April 18, 2016
Verified Purchase
The longer you read the more you get sucked in to James Thomas's very unique brand of comedy... Would be a great gift for anyone with a quirky sense of humour.
Read more
Helpful
Sending feedback...
Thank you for your feedback.
Sorry, we failed to record your vote. Please try again
Report abuse