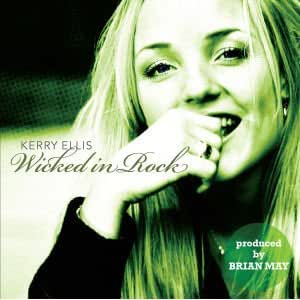 Kerry Ellis is the much loved originator of the 'Meat' role in WWRY London and is currently starring as Elphaba, the Green Witch in Wicked in the West End.

This 3 track CD is arranged and produced by Brian May and features Taylor Hawkins on drums, Brian May on guitar, a 60+ piece orchestra and Ms. Kerry Ellis - in devastating form.

Brian May - "It's just three tracks, one of which will be familiar to some of you, but a mammoth effort - they are all epics! They feature myself on many guitars, Taylor Hawkins on drums, and a huge orchestra, under the baton of Steve Sidwell. Needless to say, soaring above it all, Ms Ellis, the Rock and Roll Elphaba, sounds incredible. It takes a lot of persistence and belief to realise this kind of dream, particularly since these song treatments are quite experimental … but I'm thrilled with the way the tracks have come out.

Two of the songs are from Wicked, but with rock arrangements from me, which take them 'out of the box'. For me, it's been a fascinating journey, and Stephen Schwartz, who wrote the songs, has been very supportive to us. More of this later, but it's been done with great respect to the originals, but out of a belief that there was new place, in Rock, that this great material could reach. The third track is "No-One But You", from We Will Rock You, of course.

We have a whole album in process, so in the meantime we thought it would be great for her fans to have something substantial out there, to fill the gap. This is it!"