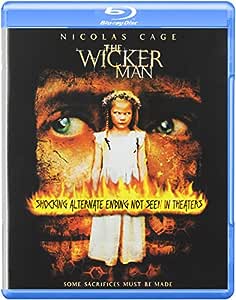 Acclaimed filmmaker Neil LaBute ("In the Company of Men") directs Academy Award-winner Nicolas Cage ("National Treasure," "Matchstick Men") in this spine-tingling remake of the 1970s British cult classic horror film. Cage plays a police officer investigating the disappearance of a young girl on a remote island off the coast of Washington. His hopes of unraveling the mystery of the girls unsettling disappearance become increasingly uncertain however, when he unearths disturbing evidence of pagan rituals being performed in the small, cult-like community. With the help of a frightened local (Golden Globe-nominee Leelee Sobieski -- "Uprising," "Eyes Wide Shut"), he must confront the island's horrific secret, and its other-worldly leader (Academy Award and Golden Globe-winner, Ellen Burstyn -- "Divine Secrets of the Ya-Ya Sisterhood," "Requiem for a Dream"). Also starring Golden Globe-winner Frances Conroy (TV's "Six Feet Under," "The Aviator") and Molly Parker (TV's "Deadwood").

Nicolas Cage stars in The Wicker Man as a traumatized police officer investigating a lost girl on a mysterious, mist-shrouded island of imperious women and dimwitted men. Summoned by his ex-fiancee (Kate Beahan, Flightplan, who seems to have borrowed her lips from Angelina Jolie), Edward Malus (Cage, Adaptation.) blusters his way into a closed religious community by flashing his out-of-state badge around and insulting everyone he meets. To describe The Wicker Man any further would deprive viewers of enjoying the staggering ineptness of this absurd remake of the fairly creepy 1973 original. Despite a talented cast (including Ellen Burstyn, Requiem for a Dream, Molly Parker, Deadwood, and Leelee Sobieski, Joy Ride), the performances are uniformly awful, with Cage leading the pack; his overwrought cries of "How'd it get burned?!?" will provoke barks of laughter. Arbitrary wierdness abounds--ranging from animal masks to a body-stocking of bees--in a flailing effort to distract the audience from the narrative running madly off the rails. Maybe writer/director Neil LaBute (In the Company of Men, The Shape of Things) aspired to create a fever dream of male fears about women, but the result is a deformed hybrid of Invasion of the Bee Girls and The Village. A future camp classic. --Bret Fetzer